Reported head injury resulted from attempting to jump a chain

An apparent hard fall, involving two youths, one of them seriously injured, resulted in the need for a medi-vac operation at Dockside on the Cold Spring waterfront Sunday (July 23). 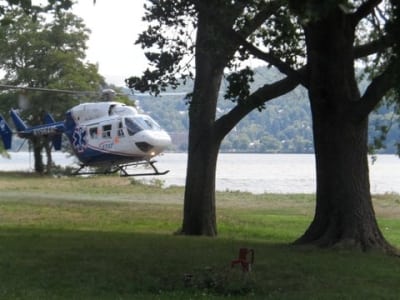 According to one eyewitness, fire, ambulance and police services all responded to the scene and a helicopter was eventually summoned to take the injured boy to the hospital. The helicopter landed in the large open meadow area on the eastern bank of the Hudson River.

Local resident Ann Beddingfield told Philipstown.info that she encountered a small crowded huddled around a young man seated on a rock holding his head as she and a friend entered Dockside.  She said she heard during the course of the next hour that the boys may have attempted to jump the chain that runs across the entrance and got their feet entangled resulting in a fall. Later she said she heard that an emergency medical technician had said that the incident involved traumatic head injury.

Radio station WHUD later reported the helicopter took the victim to St. Francis Hospital in NewBurgh, while the his companion was taken by ambulance to a Westchester Hospital. The pair were reportedly visitors from Maryland.