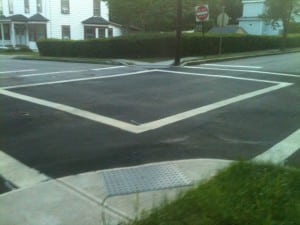 Intersection of Division and Pine, complete with painted crosswalks.

Though the agendas were light, the Nelsonville Village Board convened for their regularly scheduled meetings for the months of June and July. Much of June’s meeting was devoted to the completion of the road repair performed throughout the village with federal grant money.

“This grant was a headache, I guess. Is that a good word to describe it?” asked Mayor Tom Corless, rhetorically. “It was so specific, it really hindered us,” he added.

The mayor was referring to the time-consuming nature and strict guidelines of money awarded through the Federal Transportation Improvement Act of 2005. As an example of the difficulties referred to by the mayor, the grant guidelines dictated that the funds be evenly distributed to all venues originally identified in the grant application, leaving no option for the village to revise plans according to road deterioration that might have occurred after the grant had been awarded. This resulted in achieving much-needed improvements on Division Street, Wood Avenue and some of the streets that intersect with them, but in a way that looks less comprehensive than it otherwise would in the absence of the strict guidelines.

Additionally, the project was especially drawn out due to the requirement that each phase of the project, from engineering to design and finally to construction, be paid for as it occurred, with the State Department of Transportation acting administratively on behalf of the federal grant. Given the inevitable lag in such a bureaucratic process, the project’s timeline was prolonged.

The total grant amount was $250,000. Per the grant requirements however, the village was obligated to contribute over $60,000 from its own coffers. With the final coat of paint applied to the new crosswalks and a final check issued to McNamee Construction, this seven-year road repair chapter for the Village has closed.​

During July’s public comment period, a Pine Street resident weighed in with her concerns about overgrown trees on her block that were planted years ago by the village. In turn, she learned about the role typically played by Central Hudson Gas and Electric in terms of branch pruning. “The power company trimmed them brutally, before you moved in,” said Trustee Ande Merante. “They take care of them only to the extent that it frees the power lines up.”

That resident’s concerns were in line with a survey conducted through June and July by Trustee Merante. He took a count of trees with overgown canopies and broken limbs. His study also examined any damage to sidewalks resulting from the root systems of the trees.

“There are five sections of sidewalk on Division ​Street that are a real problem,” said Merante, noting that some of the broken ​limbs can be traced back to the Halloween storm of last October. “There are still a number of branches hanging down. Even my little car hits one of them ​every ​​now and then. A delivery truck comes by and it’s doing more damage to these ​​trees,” he said.

Mayor Corless assured the Pine Street resident that the village would be addressing her concerns, noting that it’s a multi-pronged problem involving pruning, sidewalk repair and, in some cases, tree removal. “We will continue to check it out. We’ll have to get some cost estimates,” said the Mayor.

Also during July’s public comment period, village resident Frank Caccetta voiced interest in the status of 114 acres leased from the village by the Open Space Institute (OSI). The Board had taken up a request in March by the Nelsonville Fish and Fur Club to establish a bow-hunting range on the parcel, which is situated north of the village and includes the wooded area at the foot of Bull Hill. Caccetta’s main interest though, was whether OSI would permit hunting on the parcel.

“The amount of deer that are coming out of there, they have to be thinned out,” said Caccetta. Mayor Corless has focused primarily on the request for the bow-hunting range in his dealings with OSI, but admitted that scheduling conflicts have prevented him from having been able to schedule a meeting with the group over the last several weeks.

Property tax notices went out to village residents in early June. According to Village Clerk Pauline Minners, remittances began slowly but have since picked up. Nelsonville has received $226,610.88 of property taxes so far, out of an amount expected to be close to $250,000. Minners recently issued a letter to the owners of the 17 parcels who have not yet paid, noting that every bit counts. “I received a check for 50 cents,” she said, indicating the miniscule amounts that sometimes factor into village finances.

Another source of revenue for the village was a disbursement of mortgage tax from Putnam County, totaling $2,796.28. That figure is down more than $1,100 from last year. The board attributed that difference to the fact that fewer homes had been refinanced this year.

Also during the July meeting, Trustee Will Duncan announced that as part of the water main work now beginning on Main Street, there will be a new fire hydrant in the vicinity of Nichols Lane, in order to comply with the National Fire Protection Association standard of having hydrants placed in intervals of 500 feet.