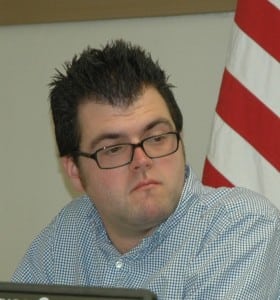 Claiming that a dictatorship exists in Cold Spring, a village trustee Monday afternoon (July 30) called for dissolving the village and combining it with the Town of Philipstown.

The trustee, Charles Hustis III, described the step as a tax-saving measure. In a related memo, Hustis also objected to restricting public comment at meetings and urged establishment of an ethics board to investigate the Village Board on which he serves. He requested that his views on public comments and the ethics panel be addressed at the Tuesday night (July 31) board workshop. The items appeared on a revised agenda dispatched the same afternoon.

“My sole purpose is to dissolve the village government and merge with the Town,” Hustis wrote in an email to Mayor Seth Gallagher and fellow board members, as well as Clerk Mary Saari and Village Attorney Stephen Gaba. “We don’t need another taxing level of government here. The revolution has star[t]ed in the village and will continue until the village is dissolved.”

When Gallagher asked if Hustis was serious, Hustis repeated his call, using capital letters and multiple exclamation points for emphasis. “That’s right Seth,” he wrote to the mayor and others. “DISSOLVE THE VILLAGE GOVERNMENT COMPLETELY!!!! Get rid of the unnecessary taxing level of government in this community. We are a fiscal rip off. This government serves only those for whom they can control in the end. There is no independence in Cold Spring, only a dictatorship.”

The correspondence began circulating beyond the Village Board later on Monday.

Hustis launched his efforts with a memo that criticized attempts, led by Gallagher, to limit public comment at board meetings, especially the informal weekly workshops, after a number of sessions in recent years that ended with acrimonious assertions by audience members attacking the mayor, the board, or others, and, often, drew angry retorts by the mayor or others.

One recent set-to, at both the June and July formal monthly meetings, involved allegations of impropriety in the board’s decision to raise the mayor’s salary –- an increase which Hustis proposed and voted for – and the call by resident Michael Bowman for an ethics investigation into the matter. Bowman sought the probe because the Village Board increased the mayor’s salary as it finalized details of the fiscal 2012-13 budget, a week after closing the formal public hearing on the budget.

The First Amendment and meetings 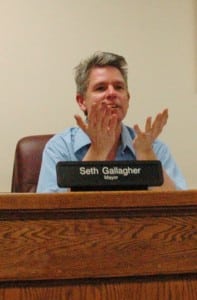 “The right of free speech, by the First Amendment of the Constitution, is something that people hold sacred to them and the very thought of government, whether it being at the federal, state, county, town, or even the village level, not allowing the public to speak when a quorum of a board is present disturbs me deeply,” Hustis explained in his memo. “Stepping back and looking at the whole situation indicates to me that there is a movement in this village to only allow those who profess a certain political ideology to freely express themselves and suppress those who disagree [and this] is reason enough to stand up and fight for free speech for all people, regardless of their ideologies. I believe that when a quorum of the board is present, we have an obligation to the people of this village to conduct village business, as well as to hear from those in attendance of these village workshops. “

At the board’s formal June meeting, when after lengthy comments Bowman sought a board vote on ​allowing him to continue speaking -– when Gallagher wanted to shut him off -– neither Hustis nor any other trustee supported Bowman’s bid.

Hustis acknowledged some limits may be necessary. “I feel that the pub[l]ic has the right to speak at village workshops in good taste,” he said in his memo. “No one deserves to be verbally abused or treated as inferior and I do not stand for that at all.”

Endorsing Bowman’s demand for an inquiry, Hustis declared that “we need to establish this board so that we can address ethics charges brought by residents to the Village Board. The charges raised at the last monthly meeting need to be investigated by an ethics board since I feel that these allegations make the office of mayor look bad, as well as the village board as a whole.”

Both Gaba and Wade Beltramo, general counsel of the New York Conference of Mayors, have said that the Village Board followed proper procedures regarding the salary hike. Beltramo noted in a message to Trustee Bruce Campbell (obtained via a Freedom of Information request) that “village boards of trustees can and frequently must amend the budget throughout the fiscal year.”

In a long rebuttal, Gallagher took up the points raised in Hustis’ memo. Among other things, he cautioned Hustis about accusations of a “movement” to stifle free speech. “You are essentially accusing this board of being part of, and certainly specific unnamed board members, of being part of such a ‘movement’ and [indicating] that you have some knowledge of it,” Gallagher wrote. “This is a very serious accusation and it should be addressed, whether the accusation be found to be true – bad; or false — also bad, especially if it is unfounded and created as part of a political sideshow.”

Likewise, he claimed that Hustis continues “to misunderstand the issues involved, especially that of free speech. When you equate the Constitutional right of free speech to the right of anyone to speak at any meeting of the Village Board you convey a serious misinterpretation of what free speech is, and what elected government is. Any municipal board has rules for public speech and I don’t know of a single one that allows unlimited public comment at every meeting.”

Furthermore, he told Hustis, “while public comment is essential and necessary at various times, unlimited public comment at all times allows certain members of the public  — those attending and speaking — to have more influence than other members, those not attending and not commenting… . Remember that we are elected to conduct village business for all the residents, including those not at the meetings.”