Over the weekend, while acknowledging that the mayor has a right to assign liaison roles, Hustis again endorsed dissolution efforts, repeated his allegation that the village government is a dictatorship, alleged that outsiders have seized control of Cold Spring, and accused the village of unwisely catering to environmentalists.

On Friday (Aug. 3), Gallagher told Philipstown.info that he had met with Hustis the previous day and stripped him of his role as liaison to the village’s Zoning Board of Appeals, the Philipstown Town Board, and the Cold Spring Chamber of Commerce. Hustis retains his chairmanships of two Village Board committees. The mayor’s action stemmed from events of July 30, when Hustis sent emails to his fellow Village Board members as well as other officials calling for the abolition or dissolution of the village. 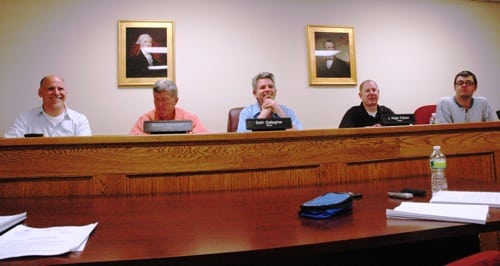 “My sole purpose is to dissolve the village government and merge with the town,” Hustis wrote in one email. He termed it a cost-saving measure and said that “the revolution has star[t]ed in the village and will continue until the village is dissolved.” He later charged that “we are a fiscal rip-off” and that “there is no independence in Cold Spring, only a dictatorship.”

Gallagher said on Friday that he ousted Hustis from the liaisonships because of doubts about the trustee’s ability to fulfill his responsibilities, given his self-proclaimed agenda. “When you say your sole purpose is to dissolve the village, it kind of means you’re not going to do anything else,” the mayor said.

“It’s unfortunate that I was removed from the three positions,” Hustis said on Saturday (Aug. 4) during an interview with Philipstown.info. “It’s just a shame that with dissenting views this occurs. But it’s his   prerogative and his call.”

During the interview, Hustis sought to shift his focus from dissolving Cold Spring to seeking a study on the merits of dissolving it. Moreover, although his emails were addressed to the mayor and fellow trustees and proposed, in unmistakable capital letters, that they “DISSOLVE THE VILLAGE GOVERNMENT COMPLETELY,” during the interview he said his proposals were directed toward the public at large.

“With the idea that was thrown to the people for dissolution — I did it to pose the question of questions to the taxpayer: Do we need a village government?” Hustis said. “I’ve concluded to proceed and have a dissolution study done. My assignment: to see if it’s really worth it to the people.” He pointed to Putnam County, Philipstown, and the village. “Three levels of government, three times the taxation: Is this level of government necessary and are there ways to become more efficient with services?”

Addressing that question “is really the precipitous of this bold idea,” he said. Hustis finds no conflict between his trustee position and his determination to explore, if not immediately obtain, the demise of the village. As a trustee, “I can pursue this because it’s answering an important question. Now, until the question has been answered, I still fulfill my obligations as an elected trustee,”​ ​he said.

Hustis said the first step is a citizen petition demanding a dissolution study. Funds for the study, conducted by a professional firm, “would come out of the coffers of the taxpayers,” or, possibly, from grants, he said. Questioned when work on the petition would begin, he replied: “It is being drafted right now, for language. I actually don’t know who’s doing it. Other people are doing it, right now.” Asked who informed him drafting is underway, he remained silent, then said: “It was just a rumor on the street.”

As to whether a village dictatorship exists, Hustis said, “I believe there is [one]. I believe that Seth is the dictator.” He added that Gallagher “does have very good ideas, but one does have to be open to other people’s ideas” and that the mayor typically dismisses Hustis’ ideas.

Trustee Matt Francisco observed on Tuesday (Aug. 7) that Hustis has sometimes attributed the impetus for his dissolution efforts to disagreements with a majority of the Village Board on various matters.

“If Trustee Hustis found himself in a minority position on an issue with the Village Board then democratic process dictates that his minority opinion not be pursued by the Village Board,” Francisco said. “For Trustee Hustis to denounce the existence of village government because he held a minority opinion at a given meeting is not representative and not in service to the majority of voters who elected him.”

Francisco likewise observed that the elected board was “entrusted to represent the majority in what is best for our village even when we may not personally agree” and that having Hustis “denounce the existence of the government he was elected to serve in, calling it a ‘fiscal rip-off,’ creates a clear conflict that he needs to address to the residents’ satisfaction.”

Should dissolution not occur, Hustis proposes to replace the mayor and trustees with a “direct democracy” in which all citizens make decisions, with an overall village leader chosen by lottery. “A lottery would be fair,” he said. Until direct democracy prevails, he recommended broad leeway for public input. “When there’s a meeting of the board, a quorum, we have an obligation to conduct the public business but at the same time the public, the taxpayers, have a right to be heard at each and every meeting of the governing body,” he said.

Hustis also cited his belief that outsiders are taking control of the village, pointing out that others share his suspicions. “The angry residents that have spoken do not feel it’s their village anymore,” he said. Moreover, he said, Cold Spring “is catering to environmentalists. There were a lot of these things for Scenic Hudson, all these things for, like, free parks and ideas and things for the [Hudson Highlands] Land Trust. I just think it’s too much green. I think we’re going too green.”

Owner of the West Point Foundry Preserve in Cold Spring, Scenic Hudson is turning it into a public historical park. The Hudson Highlands Land Trust provided funding for the “dark skies” lighting at the Cold Spring dock.

Hustis repeatedly portrayed his stance on dissolution as “bold” or “radical” and said he wants to convey a “theme” of “thinking outside the box.” In doing so, he said he is open to dialogue with the mayor. “If he wants to sit down with me, one on one, man to man, and iron out the differences [between them] I’m willing to do that,” he said. “I’m making the offer now.”

Trustee Bruce Campbell said he worries that Hustis’ dissolution campaign will prove disruptive. “I’m ​concerned with his intent and feel it will be counterproductive as to all of the work the Village Board has, not only on a routine basis but especially with all of the ongoing projects and plans we’ve been, and will continue to be, working on,” Campbell said Sunday. “I really can’t understand how Chuck can truly feel the way he’s expressed himself, other than pressures from others may be influencing him. He has the right to express himself as he did and if consolidation is the means of his intent, it isn’t going to be a short-term or easy process.”

Campbell, who serves as deputy mayor, said he intended to talk to Hustis. “If communications between the mayor [and] the trustees between themselves fail, then nothing more than problems can be expected,” Campbell told Philipstown.info. “We may not agree with each other, but still have to work together to maintain the necessities to fulfill all of the roles of the village government.”

Francisco said Hustis owes his fellow villagers answers “about this ‘revolution’ he is involved in to ‘dissolve the village government and merge fully with the town.’ Trustee Hustis needs to demonstrate to village residents how he is confident that this dissolution of village government is the will of the majority of Cold Spring residents, as opposed to the interest of an extreme few who believe ‘dictatorship’ has replaced democracy.”

He also predicted that going forward Hustis’ original statements would be repackaged as simply an interest in consolidation and money-saving efficiency. “I fear that this tempering of the language will deflect attention from fundamental questions about Trustee Hustis’ motivations and his capacity to serve on the Village Board, respecting democratic process, and without such a stark conflict of interest,” Francisco said.