Proposal would have West Point relinquish authority to Interior Dept. 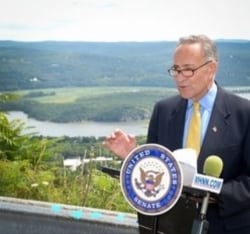 Adding one more initiative to the growing local tourism momentum, U.S. Sen. Chuck Schumer, D-NY, last Monday (Aug. 6) called upon the U.S. Army and West Point authorities to relinquish control of Constitution Island and transfer it to the U.S. Interior Department. Schumer believes the Interior Department can transform the island into a more active tourist destination.

U.S. national parks and historic places come under the jurisdiction of the Interior Department. Constitution Island is located in the Hudson River at the southern end of Philipstown and Putnam County.

“Currently, under West Point’s control, the Revolutionary era landmark is only open to tourists and visitors two to three months each year. Despite the limited availability for tourists to enjoy Constitution Island’s trails and scenery, over 5,000 bikers, hikers and sightseers from over 35 states and 19 countries flock to the island each year, which demonstrates the unleashed potential of the island,” said Schumer in a statement.

Schumer made the statement while overlooking the island from the Orange County side of the river on Route 9W. His statement mistakenly identified the island as being partially in Orange County, where West Point is located.

Specifically, Schumer is asking the Obama administration to transfer authority over the 280-acre property from one government agency to another, which he believes is legally permissible under the federal Antiquities Act. The law is intended in part to protect historic places worthy of governmental preservation.

Constitution Island is famous as a key site for the positioning of the Revolutionary War chain, which was strung across the Hudson to West Point to block British war ships from sailing south to divide Washington’s forces.  Ruins from the period are still visible.

In addition, the 19th-century Warner family home first occupied in 1836 is another major island attraction. Susan and Anna Warner were popular 19th-century writers. The home, in need of renovation, has been closed for the past three years.

“The initiative being offered by Senator Schumer is a most exciting and wonderful plan for Constitution Island. The real winners will be the visitors and residents of the Hudson Valley who will have access to a very special place most days of the year,” said Betsy Pugh, chair ​of the Constitutional Island Association. The organization, founded in 1916 to preserve the Warner home, has shared stewardship of the island with West Point authorities. The relationship has been strained in recent years as post-9/11 security concerns and budget constraints have limited visiting times and access to the island.

Both Richard de Koster, executive director of the association, and Mayor Gallagher affirmed to The Paper that general discussions had taken place, including Schumer’s office, on the possibility of providing some kind of regular ferry service to the island from the Cold Spring dock. Gallagher said there was no specific proposal at hand, but that individuals have expressed interest in including the island in a wider tour-boat service.

deKoster also said that Schumer’s office had reported that the Army had a favorable response to the Schumer idea. But that is a long way from actually making the administrative moves necessary to change over control of the island. And it remains to be seen whether the Interior Department is interested and would have the budgetary wherewithal to incorporate Sen. Schumer’s proposal into its operations.