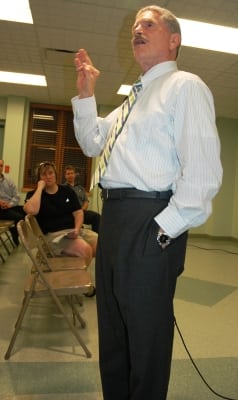 New York’s top expert on government transparency declared last week that the state’s openness-in-government laws apply to volunteer fire departments and that such governing bodies as village boards of trustees cannot broadly invoke “personnel” issues as an excuse for holding executive sessions — discussions from which the public is barred.

Robert J. Freeman, executive director of the New York State Committee on Open Government, led an audience of approximately 45 through the ins and outs of the state Open Meetings and Freedom of Information Laws. Sponsored by Citizens of Philipstown, the forum occurred on a stormy Wednesday night (Aug. 15) at the North Highlands Fire District firehouse.

At the event, part lecture and part question-and-answer period, Freeman fielded queries touching upon local concerns. Along with fire-department governance and executive sessions, topics included alleged non-feasance by a government official, citizen involvement and public comment, and the role of the press.

Both times, Freeman said the laws prevail. He explained that New York State’s highest court, the Court of Appeals, “unanimously found a volunteer fire company is covered by the Freedom of Information Law. Why? Because it performs what historically has been deemed an essential governmental function, number 1, and, number 2, it would not exist but for its relationship with the municipality.

He also took up the issue of executive sessions of the Cold Spring Village Board. The questioner, Michael Bowman, claimed the board invoked “something to do with personnel” as the reason for an executive session.

Freeman replied that a broad reference to “personnel” matters constitutes insufficient grounds to go into executive session. “No, no, no!” he emphasized. “’Personnel?’ Not good,” and a village attorney who condoned using that as the rationale “was wrong, plain old wrong.”

However, he also stressed that personnel situations involving “a particular person … would be the subject of a proper executive session.” The law allows executive session for discussions of such things as a specific employee’s medical, financial, or work history or the hiring, promotion, or disciplining of an employee, as well as the appointment of someone.

That means that appointment by a municipal governing body of a volunteer to serve on a local government advisory board is “a valid basis for closing the doors,” Freeman added, addressing a question raised by a separate audience member.

Refusal to execute board action

Former Cold Spring Village Trustee Airinhos Serradas asked about recourse in a situation where a board considers an action, the presiding officer opposes it and says he will not implement it, and the board majority votes to proceed. Although he did not identify the board and official, the context suggested he meant the Cold Spring Village Board and Mayor Seth Gallagher.

If a board majority votes to do something, “that’s the law,” Freeman answered. “If so-and-so on a board says, ‘I don’t care,’ that leads to chaos. It involves a clear absence of respect for others on the board as well as the public.”

Serradas then asked, “What should the existing trustees that are there now do?”

“Grow backbones,” Freeman replied. Also, he observed, a private resident can sue the municipality,  “asking the court to compel the agency to do what the law requires it must do.”

Asked on Friday (Aug. 17) to pinpoint the Village Board vote to which he referred, Serradas did not respond. Village Board minutes during his term appear to contain no recorded votes on which the mayor cast a minority “nay” vote and declared he would not execute a board policy. However, last March 6, the board voted 4 to 1, with Gallagher the lone “nay,” to assign an unidentified person to produce a garbage-collection report, related to preparation of a request for proposals (RFP) for outsourcing garage collection, which Serradas advocated.(A few weeks earlier, the board had turned down Serradas’ own draft RFP, saying it needed improvement.)

On a second March 6 vote, Serradas attempted to have the mayor prepare the garbage report; Gallagher termed the report a waste of time and said, “I would never do it,” and Serradas’ measure failed.

Freeman urged residents to take advantage of the openness laws and monitor governments and noted that new state provisions demand that government jurisdictions make meeting materials available. Effective last February, the law states that materials be publicly available before or at a meeting, “to the extent practicable.” According to Freeman, “That has become hugely significant. Take advantage of it. I hope it will democratize the process in a variety of ways.”

Nevertheless, the right to access is not all-encompassing, he said, getting into an exchange with one audience member about such items as “messaging” entries on Gov. Andrew Cuomo’s cellular phone or similar device. “I think there are reasonable limitations to the public’s right to know,” Freeman said.

Likewise, he said boards can restrict public comment at meetings. “The Open Meetings Law says absolutely nothing about the public’s right to speak at public meetings,” he said. “That is the board’s choice.” Because five minutes apiece of audience comment is “very long,” he suggested boards limit each person to three minutes — “and even that is kind.”

He also described the press as crucial to open government . “The level of knowledge and activity and aggressiveness on the part of the news media make a huge difference,” Freeman said. “If the news media is absent, chances are the Open Meetings Law will not work particularly well.” At the same time, he noted, the news media has no special rights under the opennness laws, but “my belief is that it has special responsibilities.”

Editor’s note: A video of the presentation has been posted online by COP.