Kristin Scali crushed her first shot of the day into the fairway and slipped her Cleveland driver back into her golf bag. A subtle smile signaled her satisfaction with the shot, and she went on to play the course with steady presence. 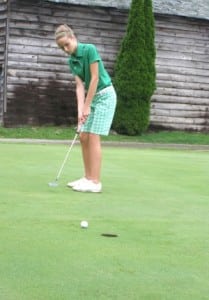 Kristin Scali puts her putting together on the green. Photo by M.A. Ebner

This summer, the Garrison teenager took her game on the road with the Hudson Valley Junior Golf Association Team Match Series. After swinging clubs for a few years and giving her father a decent challenge on the golf course, Kristin found herself in need of advanced playing partners. She joined a league and has made her way around the Hudson Valley over the past several months, playing pristine courses and improving her game.

“Playing with different people and with people that are better than me has really helped me improve my game,” Kristin said. “The Hudson Valley junior golf league is a friendly league, and I want to go out there and do my best.”

Kristin’s best this season ranks well for a rising eighth grader. A student at the Garrison Middle School, she posted a 94 best during summer league play, turning in sub-100 rounds at Vassar, Beekman, Mansion Ridge, Warwick and Dutchess Golf & Country Club, where she shot a 97 Aug. 16 to wrap up her season.

Mary Selber, league statistician for the Hudson Valley Junior Team Match Series, believes that Kristin has what it takes to master the game.

“We’ve seen Kristin grow from being shy and uncertain of herself to being confident and eager to play,” Selber said. “Her scores are getting better with each and every tournament, and she’s playing against some girls who are 17 and 18 years old. The girls she plays with are amazing young ladies.”

Kristin’s father, Vinny Scali, isn’t feeling left out now that his daughter has moved on to play golf more competitively, and boasts that being beaten on the course by one of his kids is a reward of parenting.

“We took Kristin out a few times to play when she was about 10 and she just had one of those natural swings,” Scali said. “For a while, she was only playing with me, but now, she’s taking a lesson once a week and playing in the league with talented young athletes. That’s what she was missing.”

Kristin’s schedule includes practice at home, on the course, and at Saturday morning lessons with her coach, golf professional Lee Ferrec, in Pine Island in Orange County.

“To be able to shoot in the low 90s by age 12 or 13 is quite good,” Ferrec said. “Her scores will continue to improve and I think by next year, Kristin will be shooting in the 80s. She’s a really smart young lady and she understands what she needs to do.”

And Kristin finds it easy to motivate herself, balancing her studies and family commitments.

“My home course is the Highlands Country Club,” Kristin said. “During the summer, I try to play at least nine holes five days a week. I’ll also putt for 30 minutes, and then I’ll do the drills at home that my coach wants. Sometimes I do strength training, and during the school year, I still make an effort to practice putting downstairs in my basement and hitting outside in the net in the backyard.” 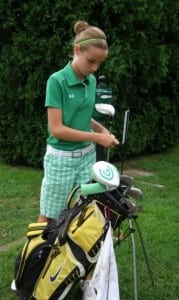 Kristin Scali dusted off her mom's old clubs to get in the game. Photo by M.A. Ebner

Kristin’s backyard offers additional inspiration for the sport as the Scali family home overlooks The Garrison golf club. But life for the family of six doesn’t revolve around Kristin’s golf regimen. Kristin has a twin sister, Emma, who plays soccer; an older sister, Megan, who stays active with tennis and horseback riding; and a younger sister, Hanna, who also plays tennis. Kristin’s mother, Heidi Scali, keeps the family grounded and simultaneously on the move.

“For Kristin, this was the next step she needed to take her game to other courses. But she has to be aware of her sisters and their schedules,” Heidi Scali said. “I’m the driver, and it’s kind of complicated in that it takes a little longer for everyone to coordinate, but they respect each other’s schedules.”

Kristin may spend hours on the golf course, but when she’s not chipping shots in her back yard, she enjoys spending time with her family, writing poetry, and sewing.

“Language arts is my favorite subject,” Kristin said. “I love writing poetry, and I also like to sew. I made a bunch of pillows, and I made my mom an apron, and I made a pencil case for school.”

But when she finds a few extra practice minutes, she prefers to sink putts. Kristin rolls her putts with respectable speed, and she follows some of the top young players in the game.

“I like Rory McIlroy and Ricky Fowler, and Beau Hossler,” Kristin said. “I went to a women’s tournament (2009 Sybase Classic) and met Michelle Wie. I went over to walk next to her, and she gave me a ball.”

Kristin keeps the souvenir ball among her collectibles, which also include a golf glove signed by Johanna Mundy, and a visor signed by Wie and several other women who competed in the 2009 LPGA tournament.

While Kristin keeps her eyes on top performers, she’s excited to walk challenging courses as a player.

“I’ve never played any of these courses,” Kristin said. “I sometimes go online to check the course or I look at the scorecard. The first tournament (July 5 at Beekman Golf Course), I was really nervous. I had to do well, and I shot a 94.”

As her coach teaches, there’s much more to the game of golf than swinging the club and hitting the ball.

“Kristin shows a huge dedication to improving. The more you deviate from the 60-degree plane of the swing, the harder it is to make your shots,” Ferrec said. “Her swing has really improved, and she’ll be working more on her short game.”

Playing in the summer tournaments has helped Kristin with performance and confidence, and she plans to take her game to the next level.

“I’m going to be going to O’Neill High School (fall 2013),” Kristin said, “and I definitely want to play golf there. When I’m around golf, it motivates me to golf more.”

Like any sport, junior golf demands commitment. Association statistician Selber said that young, local golfers have grown through the Hudson Valley program since its inception 39 years ago. The program is open to boys and girls who have reached a level of endurance to play the game.

“We play on some very tough courses,” Selber said. “Kids can be between 10 and 18, and they must be capable of playing 18 holes. These kids would otherwise not get to play at most of these courses. Tournament fees range from $25 to $35 (including lunch), and at the end of the season, we let the players cash in the points they’ve earned for equipment, so everything we take in, we give back.”

To find out more about the Hudson Valley Junior Golf Association Team Match Series, contact Selber at 845-632-1391 or visit the association’s website.