Residents joined the Cold Spring Village Board Tuesday night (Sept. 4) for the unveiling of a basic design for a new firehouse, estimated to cost over $1.28 million, to replace the inadequate structure on the same site at the corner of Main and Church Streets.

The Village Board unanimously gave informal approval for pursuing the proposal to gain a better understanding of the cost, including the expense of demolishing the existing building, detailed architectural plans, and elaboration of other aspects of the project. 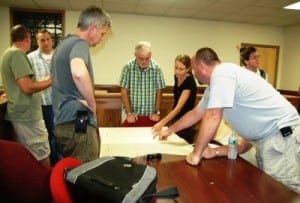 Village Board and audience members review the drawings for a new firehouse. Photo by L.S. Armstrong

The concept debuted a week after the Village Board got a tentative figure of $1.45 million for another infrastructure project, rebuilding the sewage treatment plant.

Trustee J. Ralph Falloon promised to try to provide more data on the firehouse plan in about a month. A member of Cold Spring Fire Company No. 1 (CSFC), he presented the concept to the board and a rapt audience, a mix of members of the general public and firefighters. Falloon said the drawings were the culmination of several years of deliberations. At one stage the village explored the idea of putting a new firehouse at the Butterfield Hospital site, which proved unfeasible. Moreover, as Falloon noted on Tuesday, “people wanted to stay on Main Street, so we stayed at the current site.”

However, he explained “that site is kind of a nightmare. We’re actually scared to dig there,” so the concept minimizes excavation and relies on a modular facility, a form of “Butler building.”

The trustee said that so far the village and fire company have received volunteer aid from two architects, James Hartford of River Architects in Cold Spring, and Jamie Copeland of Hudson Design in Garrison, the president of the Garrison Volunteer Fire Company.

Copeland provided the concept drawings, and Hartford assisted with planning a firehouse in a different configuration a few years ago and offered on Tuesday to provide additional help with the new concept. Likewise, engineer Michael Carr, who did paid work on the existing firehouse, donated his skills to the effort to devise the concept.

“I’ll fight to get as much free information as possible” and will seek free estimates from local contractors on the demolition work, Falloon said. Nonetheless, he cautioned, “there’s only so much I can beat people up for, to get numbers for free.”

Falloon also warned that the projected cost of $1,286,000 “is our base price” and does not include ongoing professional architectural work, demolition, and related expenses. He said the planning so far “brings our costs to what we believe to be financially responsible” in scope.

Mayor Seth Gallagher asked the amount of the total cost of the project, and Falloon said that he and his firehouse colleagues had not yet nailed down a number and also had not pursued some technical considerations pertinent to a new building. “We didn’t want to get bogged down in planning if it’s not an acceptable project for the village,” he said. 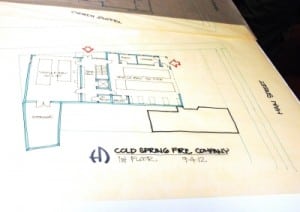 An architectural drawing shows the layout of the first floor of the proposed new Cold Spring firehouse. Photo by L.S. Armstrong

He added that coming up with a firmer figure for total costs would be part of the next round of activity. As a rough personal guess, he pegged total costs at $1.5 million. Given the deficiencies of the present firehouse, though, “we don’t have a choice,” Fallon said. And, in terms of overall cost, “we’re way, way below what others paid” for new firehouses.

“I think it’s a good plan and worth the next step,” the mayor said. “It’s going to cost some money, but it’s definitely worth doing.” He observed, though, that “it’s hard to get the money; this would be out of the general fund,” the main village budget account, and would require a bond.

If the building costs $2 million, at 4 percent interest charges over a 20-year bond, the ultimate cost of the firehouse and financing for it would be $3 million, Gallagher said. Under the same formula, a $1.5-million firehouse would cost a total of $2,250,000. In any case, “we’ll move ahead on this,” Gallagher said.

To help ease the financial burden, “we would absolutely exhaust every grant application we could find,” Falloon pledged.

The mayor pointed out that Nelsonville and the Town of Philipstown also could be expected to chip in, as the fire company serves Nelsonville and parts of Philipstown. Furthermore, he said, if the Butterfield redevelopment goes through, the village government should realize $75,000 to $80,000 annually in additional revenue. “That would make this much easier,” Gallagher said.

According to the concept drawings, the new firehouse would be on two levels, containing enough room for a ladder truck, which the CSFC now lacks, offices, training areas, meeting space, and more.

Asked if the firehouse could be three floors, to provide rental space on the upper story, Falloon answered, “I’m not opposed to it, if we could do it.” Subsequently, he said three floors would probably be too high.

Other three-story buildings stand nearby, including the original Methodist Church, now home of a hardware store, C & E Paint Supply, across Church Street from the firehouse.

The mayor said he doubted that the village government, owner of the firehouse, could legally rent space to outside parties. However, the village government owns the Cold Spring Boat Club property and leases it to the private Boat Club, which pays no monetary rent but offers support-in-kind, such as accommodating a rescue boat and providing “free access across the existing boat ramp to the Hudson River for Village of Cold Spring residents, at times and under circumstances determined to be safe and convenient” to the Boat Club.