Cold Spring’s Historic District Review Board Wednesday (Sept. 5) made a case for re-using the old Butterfield Hospital, while developer Paul Guillaro cautioned that preserving the decrepit building jeopardizes his plans to provide a post office, senior center, and inter-governmental building as part of his overall redevelopment.

After more than 90 minutes of intense back-and-forth, Guillaro agreed to return to the HDRB on Sept. 19 with information on three options: saving the entire hospital, with its three structural parts built around 1925, 1941, and 1963; saving the 1941 and 1925 sections, and demolishing both the 1963 and 1941 additions while retaining the original 1920s building, now partly dismantled and hidden by later accretions.

HDRB members also discounted statements that saving the hospital sacrifices space for a new post office; a modest-rent intergovernmental headquarters for Putnam County, the Town of Philipstown, and the Village of Cold Spring; and a senior-citizen community center at Butterfield, where Guillaro also wants to build upscale condominiums for retirement-aged buyers, three single-family homes, and a retail-commercial “square.” To accomplish his goals — and make money — he intended to demolish the derelict old hospital, a plan first announced last October, only to run into strong recent opposition from the HDRB, which holds authority over razing of buildings deemed historically significant.

“I think there are possibilities we’d like to pursue a little bit further” to convert the hospital to new uses, HDRB Chairman Al Zgolinski informed Guillaro, of Butterfield Realty LLC, the owner. So far, the thrust is “just dismissing it out of hand, and I think that’s the point we have an objection to. I don’t think uses have been explored up to this point.”

Acknowledging that the old hospital “could be office space” if gutted and restored, Guillaro asserted that “to try to renovate the building will not work from an economic position.” He said the county, town, village, and post office would take up too little of the hospital’s 40,000 to 45,000 square feet, leaving a large space unclaimed and making the venture unattractive to lenders.

“Besides the fact that it is a very expensive proposition to refurbish this space,” if he proceeds as he wishes he generally encounters fewer obstacles, so “we can get going on things like the county space, the town [space], the village [space], the senior center, community space, the post office,” he said. “It is a complicating factor that I committed to a certain dollar amount with the town, the village and the county because I knew what my costs would be in a new building. Now it is a problem because there are increased costs.”

Drazen Cackovic, the owner’s architect, said that under Butterfield Realty’s proposed plan Guillaro “has very low rents with the county” and other local governments. “I don’t see how he can make it” if he must restore the old hospital. 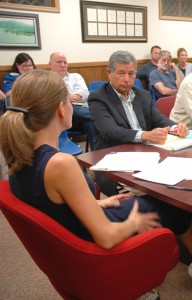 Paul Guillaro listens as Kathleen Foley, back to camera, cites the importance of re-using historic structures. Photo by L.S. Armstrong

HDRB members proposed that Guillaro concentrate more effectively on filling the old hospital with commercial occupants, including physician and dental offices, massage therapy, a laboratory, insurance and mortgage brokers, and perhaps assisted-living or renters in rooms in a rebuilt third floor in the 1920s structure, originally a stand-alone, Georgian-style building reminiscent of colonial America. “I sort of feel the possibilities are almost endless,” HDRB Member Kathleen Foley told Guillaro. “It’s going to take some creativity and a real study of the market to understand the need. We hear all the time of the need for expanded office space” in Cold Spring.

Carolyn Bachan, who serves on both the HDRB and the board of the Putnam County Economic Development Corp., concurred on the strong interest in more offices in the village. “To waste” the Butterfield property “on senior housing is almost criminal,” she said. “This is a great site to have businesses.”

Foley added that focusing on commercial space “would be very much a tax-positive approach.” A frequently stressed concern in ongoing village discussions of the proposed Butterfield redevelopment is that it should be tax-positive — provide more in tax revenue than it costs the village to provide services to it.

Guillaro observed that after buying the site, he had considered turning the old hospital into an assisted-living facility and housing the post office in the basement but that neither possibility panned out. He also sounded decidedly unenthused about trying to fill the old hospital with medical and health-care providers. “I’m not in the health-care business. I’m not looking to open up a wellness center,” he said. “The more we talk, the more economically unfeasible this becomes. I was hoping we’d narrow down the search here tonight. We’ve broadened the search” instead.

“The search is we have to first explore ways to re-use this resource,” Foley answered, “Your job is to demonstrate you’ve explored options.” She and other HDRB members recommended that Guillaro investigate tax benefits and state programs to assist owners rehabilitating historic properties.

“Take a look at the historic preservation tax credits,” Zgolinski advised. “You’re talking 20 percent of the costs. That would ease the pain.” He also suggested that if Guillaro spends money to re-use the hospital, he would save money by not having to build the other new structures envisioned in his plan.

Cackovic, the architect, mentioned the possibility of finding a solution that would “take maybe a few parts away … enhance the balance” of the old hospital, and produce something that “works for both parties,” the developer and the HDRB.

Ostensibly, the three-scenario option the board offered Guillaro at the end could provide that possibility.

After the meeting broke up, Bachan and Foley strenuously objected to comments, such as public remarks by Mayor Seth Gallagher, linking demolition of the old hospital to securing a site for the post office, intergovernmental headquarters, and senior center. Describing such talk as a scare tactic, Bachan said that “it’s a completely bogus argument.” In proposing to supply a new post office and other civic facilities while tearing down the old hospital, Guillaro “was putting a quid pro quo on the table,” she said. “But it’s not a fact of the construction.”

“Preservation and profitable development are not mutually exclusive,” Foley told Philipstown.info. “To say that the Butterfield Memorial Hospital must be demolished in order to achieve municipal facilities, a senior center, and a post office is not rational and not creative. Any and all of those uses, carefully considered, can be accommodated within a rehabilitated hospital building. To say otherwise is not only short-sighted but also is little more than bullying and fear-mongering.”

2 thoughts on “Review Board Presses Case for Saving Old Hospital”