The Howland Chamber Music’s 20th anniversary season opens with a repeat performance by the Walden Chamber Players in a combination of strings and piano. 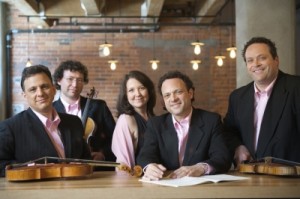 Founded in 1997, the Boston-based group has gathered a reputation for being one of the most exciting and versatile chamber groups performing today. Critics have hailed its performances from Bach to Schoenberg, and Chamber Music magazine raves: “A season spent with the Walden Chamber Players is a time of discovery.” The success of its performances, recordings and educational curricula has earned it a place as one of the most sought-after chamber ensembles in the U.S.

Walden Chamber Players is comprised of 12 dynamic artists in various combinations of string, piano and wind ensembles. This wide variety of instrumental groupings allows for great versatility and eclectic programming.

Individual members of the ensemble also often perform as soloists at leading festivals both in the U.S. and abroad.

For its concert at the Howland Center, the group will consist of violin, viola, cello, double bass and piano. They will be playing the Adagio and Rondo Concertante for piano and string trio, D. 487 by Franz Schubert; Fairy Tales for viola, cello and double bass by William Bolcom; and Schubert’s Trout Quintet in A Major, D. 667.

The concert will take place on Sunday, Sept. 23, at 4 p.m., at the Howland Cultural Center, 477 Main St., Beacon, and will be followed by a reception to meet the artists.

Tickets are available by subscription to a four- to eight-concert series at $110 to $185 respectively, and tickets for individual concerts are $30. Student tickets are $10. They can be ordered by calling 845-297-9243 or through howlandmusic.org, where further information on this and other presentations by HCMC can be found.