Personal regard for the applicant complicates differing views 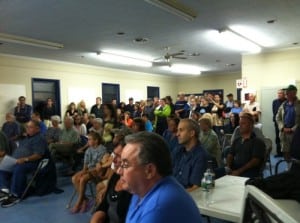 Kenny Elmes and his wife Fran in the foreground at the Cold Spring Planning Board public hearing on the Dunkin’ Donuts franchise application. Photo by K.E. Foley

A steady evening rainfall following an afternoon of wicked wind did not deter a standing-room-only crowd from attending and speaking at the Cold Spring Planning Board public hearing on the Kenny Elmes proposal to open a Dunkin’ Donuts franchise and a convenience store at his Chestnut Street gas station. At its peak, approximately 70 people filled the VFW Hall on Kemble Avenue on Tuesday (Sept. 18).

The meeting began at about 7:20 p.m. and ran until 10:40 p.m., with an unofficial tally of 38 speakers divided for and against the proposal and supporters appearing to hold a small majority. Although there were sharp differences of opinion on Elmes’ application, the hearing was civil throughout, with almost all remarks receiving polite applause, sometimes even by opponents.

Despite the division, the meeting evidenced a deep consensus that Cold Spring was a special place to live. Some expressed a strong belief that its special character lies primarily in the people who reside in the village and that a fast-food outlet, especially one that would help a long-time respected businessman, cannot undermine the sense of camaraderie and community spirit.

Others argued just the opposite, that permitting a national fast-food franchise to operate in a village treasured for its physical uniqueness by residents and visitors alike would be a slippery slope leading to additional franchise applications and a permanent surrender of the village’s most attractive qualities.

At the outset of the meeting, the Planning Board formally designated itself lead agency for the approval process after hearing no objections to that role from other governmental entities at the village, town, county and state level. Going forward, the Planning Board will hold additional workshops on the matter with the board deciding the extent of further review under the State Environmental Quality Act (SEQR). Chairman Joseph Barbaro said at the end of the meeting that it would not be until Oct. 16 before the board could meet again due to the time needed to transcribe the evening’s testimony.

Almost all of the speakers at the hearing made some reference to the applicant, Elmes, who has operated the universally appreciated Elmseco service station for over 25 years. Elmes has said at several meetings that he needs to close the auto-repair business due to declining business and the injuries he sustained in a motorcycle accident. He has said that the franchise operation together with the convenience store is his best option for business sustainability.

Some expressed their support as simply Elmes’ due as a respected businessman, a property owner with rights, and more personally, someone they trusted, liked and believed needed a break.

The first speaker of the evening set the tone for many in favor of the applicant. Tim Greco, the pastor of the Church on the Hill in Nelsonville and also the Putnam County News and Recorder journalist covering the event, declared he was taking his reporter’s hat off to testify.

Referencing hardships faced by Elmes, including the loss of a son and his left leg, Greco said: “He’s been fair to us, he’s been very fair to me, I trust Kenny, and I ask you do the same. I think he should be approved and he should have his drive-thru window. He has a right to make a living in our town, and for us to deny that is unfair.”

Greco exhorted the Planning Board to show empathy toward the applicant and to put themselves in his shoes. “I know a lot of people would separate that (the personal circumstances), but I don’t think you can.” Throughout the evening, several more people repeated Greco’s basic theme of fairness to a good and deserving man.

Echoing many opponents’ perspective, Eric Muth didn’t disagree with Greco’s view of Elmes. “I feel for him. He’s probably the most honest businessman I know in the village. I know he’s gone through a lot.”

But then Muth said he doubted the assessment by the traffic consultant for Tim Miller Associates that the Dunkin’ Donuts and its drive-thru window would not significantly add to traffic problems in the area. “I have been working with consultants for 15 years, and you can always pay for an opinion you want,” he said.

He referred to a situation in Monmouth, N.J., where he claimed consultants had assured the community about a fast-food franchise and now there is great upset over the traffic problems. “Consultants don’t always get it right,” he said, reluctantly declaring himself opposed.

Several opposition speakers honed in on the traffic implications for the redeveloped gas-station site, for the nearby establishments such as the Main Course food store, and for the wider area, including the Foodtown Plaza and parking lot, the Drug World mini-mall, and the planned Butterfield development across the street.

Parking concerns included safety issues on the site, on Route 9D (Chestnut Street), and dangers to pedestrians in a village that seeks to promote walkability, a key theme of the Cold Spring Comprehensive Plan.

“Our review of the current site plan … considers it unworkable,” said Janice Hogan on behalf of the Benedict and Marion Avenue Association, whose members live behind the Foodtown Plaza and the Elmesco station. “Too much [traffic] is being squeezed into too little space. Unlike other Dunkin’ Donuts drive-thru [operations] this plan has no dedicated path for cars.” Hogan asserted that vehicles entering the site to order coffee and donuts at the drive-thru window would have to compete for maneuvering room with cars at the gas pumps or in parking spaces.

“The most significant issue, and one that has not been addressed, is that nowhere on the site plan is there a safe path for pedestrians. How can we even consider a business that is dangerous for walkers when we say in our plan that we want to be a walkable village and that Chestnut Street should be safer? Not to mention that a lot of the pedestrians may be youth, and less inclined to pay attention to cars flowing in multiple directions,” said Judith Rose, whose detailed testimony invoked the goals of the Comprehensive Plan, such as preserving village character and enhancing economic vitality, at several points.

Hogan and Rose also warned about the impact of multiple delivery and garbage collection trucks servicing the site both during and after hours of operation, currently planned from 6 a.m. to 10 p.m.

Just as the two opponents referred to the Comprehensive Plan as the “people’s will” on the future quality of life for the village, others offered a counter-perspective that hewed closely to the existing village code as the relevant context for the Planning Board.

“We should consider this issue under the law, said Carlos Salcedo, who argued that under current zoning, “Mr. Elmes has every right to have a Dunkin’ Donuts and to use his property to that effect as long as he doesn’t break the law.” Salcedo said he didn’t personally care for the franchise being located in the village, but “whether I like it or don’t like should be indifferent.”

The prospect of an international franchise chain has rankled village proprietors since it first came to light.  And several appeared at the hearing with a few speaking in opposition.

“Our residents value above everything else the historic small town nature that is uniquely preserved in Cold Spring,” said Lynn Miller of Go-Go Pops referring to surveys done as part of the development of the Comprehensive Plan.

She also pointedly said there was no evidence that people desired the presence of “larger corporate interests that offer cheap, predictable, mediocre goods that are available along any interstate highway or in anytown U.S.A. Our business community is made up of creative imaginative entrepreneurs offering unique handcrafted goods or preserved bits of our collective history for us and our visitors to discover,” said Miller.

“I do think the idea of bringing a chain into the village is going to change its character forever,” said Jeff Consaga, owner of the Foundry Café. He agreed with the expressions of regard for Elmes and said his view had nothing to do with possible competition from a franchise. “It has to do more with my view as a resident that the uniqueness and character of the village, this historic village, will be hurt if this is allowed to go through.”