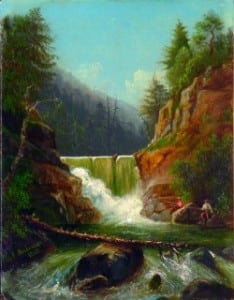 Boscobel’s guest curator for the exhibit is Alexander Boyle, son of Robert H. Boyle, author of The Hudson River, a Natural and Unnatural History. Alexander Boyle grew up in Croton-on-the-Hudson and Cold Spring. He co-authored and published the groundbreaking book Acid Rain in 1983.

Boyle later worked for the Metropolitan Museum of Art as assistant director for the film American Paradise, whose broadcast on PBS coincided with the exhibition American Paradise: the World of the Hudson River School. Boyle is also a former vice president of Godel & Co. Fine Art, where he wrote numerous exhibition catalogs on 19th- and early-20th-century American paintings.