When the Haldane School PTA met Thursday, Oct. 18, they ended with a presentation about the new fields project by School Board President Michael Junjulas and PLAY Haldane Co-Chair Jon Champlin, who is also a School Board member and president of Philipstown Pop Warner. Members of the PTA and PLAY Haldane, the ad hoc committee formed by the School Board earlier this year in May to come up with a tax-neutral plan to rehab the playing field at Haldane, seemed surprised when the presentation morphed into a discussion on safety and cost concerns about the proposed artificial turf. 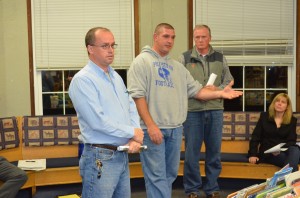 Junjulas started his presentation on the PLAY Haldane project by describing the proposed funding for the $2 million project, which aims not only to improve the playing field and install a 3-lane track for use by school and community but also provide much-needed renovation of locker rooms and the auditorium. The project would use about $680,000 in state aid, revenue from the proposed sale of the James Pond land (estimated to be as much as $525,000), and money from capital reserves, their endowment, and donations. In order to sell part of their land, the district needs a yes vote at a referendum on Nov. 13 authorizing the sale.

Questions came up about the necessity of selling land and whether the James Pond land could be used for other purposes, such as cross-country practice. The committee responded that a tax increase to fund the project would probably be defeated, hence the decision to sell most of that land, development of which is limited due to prior litigation with neighbors who opposed a plan to construct a sports complex there in 2003. According to the committee, the land is of little use to the school, even as cross-country terrain, though the district will retain access to the pond and outdoor classroom there in the case of any sale.

Barbara Hobens, a Philipstown resident and professional garden designer, questioned the decision to use an artificial-turf field. Champlin and Junjulas explained they hope to use the field for football, soccer and lacrosse practice and games, as well as for physical education classes and Pop Warner football. Without a separate practice field or fields, they said experts told them they would not be able to rest the field enough to maintain grass. Hobens disagreed, claiming that methods could be used to maintain a grass field.

Joe Curto, former president of the School Board, spoke to this later in the meeting: “We had experts in athletic fields, construction, maintenance, landscape architects, look at the fields here over the course of five years. The real legitimate companies took a look at it, and they said grass is a legitimate option, but if your usage patterns are going to be what you say they’re going to be, then grass, no matter what you do with it, doesn’t stand a chance.”

Hobens mentioned other concerns about artificial turf, such as heat, since artificial turf can be even hotter than asphalt; flooding from runoff, which Junjulas and Champlin dispelled because drainage would be improved through the renovations and as mandated by state law; injuries such as “turf toe,” caused by friction against the turf; and allergies to latex in the turf.

“If you’ve been down on our field, I don’t think there would be any more damage than on the field that we play on now,” Champlin responded.

Junjulas added: “My son has suffered concussion on this field down here, by banging his head on the ground. If you look at certain studies of athletic fields, comparing turf fields to grass fields, the concussion rate actually goes down, because of the cushioning effect of the field. Depending where you look, you can see several things. I have four kids in school. I don’t want to hurt anyone either.”

Champlin cited studies by the New York State Department of Health to explain that artificial turf has proven to be safe, but this was not sufficient for opponents of the project.

Cold Spring resident Bonny Carmicino, representing the Safe Fields Group, read from a report she wrote claiming that grass fields had not been given a fair chance and that the committee had given artificial turf as the only choice. She addressed the issues of chemical off-gassing, water contamination, increase in pathogens and injuries, heat, care and maintenance costs, carbon footprint, allergens, and limited increase in use. “We are told that it is safe,” said Carmicino, “but there are lots of very hazardous things in our world that were once considered safe.” 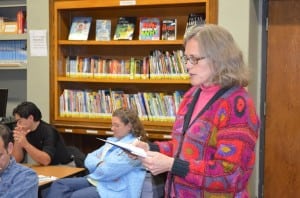 Carmicino stated that while the New York state study of 2009 claimed no dangers of chemicals released by crumb rubber, a 2010 study by Connecticut found that chemical readings were elevated with artificial turf. She also cited a study on staph infections from skin-lesions or “turf burn” and claimed that studies reporting a reduced injury rate on artificial turf were unreliable, while a recent article found that ankle sprains were more likely on artificial turf than on grass.

More studies were quoted by Carmicino to drive home the point that turf temperatures could be significantly hotter than on grass or sand, ranging between 40 and 80 degrees hotter than the recorded air temperature, which would limit use of the field as well. A couple of others concurred, with one saying that her sister’s school could not often use their artificial turf field because it got too hot.

Another parent, Carolyn Llewellyn, who is an educator at Glynwood Farm, commented on the heat as a major problem, bringing up a point from earlier in the meeting about a project called Campaign Shade Haldane, which proposes to plant more shade trees for students as well as parents waiting to pick up their children. “The heat — I mean everyone here has picked up their kids on the blacktop — we’re talking about shade trees!” she said.

In discussing the cost of the turf field, Carmicino calculated that a turf field would be more costly than a grass field, because of the costs of maintaining as well as replacing it after its projected lifespan of eight to 12 years. The committee countered that their experts had calculated a lower cost associated with a turf field than for a grass field, considering their proposed usage.

Speaking to costs, Llewellyn asked about a giant projector that was part of the proposed renovations. The committee said there were plans to install a new video projector that would allow cinematic presentations. She objected on the grounds that her children already spend too much time — about four out of five days a week — watching TV and movies at school.

Others brought up the fact that a large percentage of the cost was for the artificial turf field and practice track — $1.4 million of the $2 million proposed, or 73 percent.

When asked whether the public could vote to approve parts of the project, Champlin explained that the vote is on the complete project, since state funding is contingent upon improvements to be made inside school buildings.

The PTA and PLAY Haldane ended the meeting after parents were warned that the babysitters arranged by the PTA had not anticipated being there that late.

PTA President Laura Danilov agreed with Junjulas’ urging citizens to vote. “Please come out and do the vote on Nov. 13. If you don’t feel like this is the way to do it, then vote no, but I’m saying, there are things that need to be done.” PTA Elementary Vice President Evelyn Carr-White, who was also on the fields committee, added, “The likelihood of a project of this scope coming up again, while our kids are in school, is incredibly unlikely.”

The committee’s decision-making process is well documented on the Haldane School and Philipstown Recreation websites, where studies finding artificial turf to be safe and meeting notes going back to February 2011 can also be found.