After four years on the Philipstown Town Board and an unsuccessful bid last year for another term, Barbara Scuccimarra says, “I’m not done yet” with serving the community. So she’s taking her efforts to another level, seeking election as the Putnam County District 1 legislator. Scuccimarra, a Republican, faces Democrat Steve Rosario, another former Philipstown Town Board member, on the Nov. 6 ballot. Whoever wins will succeed long-time incumbent Vincent Tamagna, a Republican. 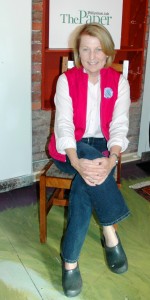 In an interview with Philipstown.info on Saturday, Oct. 20, Scuccimarra discussed her views and motivation for running. “I love what I do” in public life and miss being involved as she was on the Town Board, she said. “That’s one of the reasons I threw my hat into this race, because I’m not done yet. I want to work for this community. I want to see this community thrive. I want to protect the environment, which is most important to protecting my community’s character.”

As a resident of Philipstown for 40 years, someone who raised a family here and worked on Main Street in a small shop, “I love my community,” she said. And, “I’m a hard worker.”

Discussing issues, she touched in part on local desires to get Putnam County to share sales-tax revenue with the communities in which it is generated. Unlike many other counties in New York state, Putnam does not repatriate any of its sales-tax income to villages and towns. Scuccimarra reiterated her opinion, expressed at a Philipstown.info candidate forum on Oct. 15, that sales-tax sharing raises question of ultimate benefit. “The problem with sharing sales tax, if you even get the county to agree, is who’s going to get that money? Does the municipality [the town] get the money? Do they share it with the villages? Then where does it go?”

She suggested Philipstown would want to use sales tax for such town needs as a new boiler or highway department truck. “How is that helping the average citizen?”

Moreover, Putnam County relies on sales-tax money to help pay for unfunded mandates imposed by higher levels of government and to balance the county budget, Scuccimarra said. Without sales-tax money, “are they going to have to raise property taxes to balance the budget?” she asked. To control imposition of state mandates, she proposed heightened advocacy at the state capitol in Albany. “I think it’s imperative that we work with Albany as a county and look at some of these mandates,” she said.

The Putnam County Legislature does recognize the tax load citizens bear and is studying “every line, looking at every dollar” in the county budget for potential savings, she said, pledging to help with that. “Unite” in common purpose — “that’s what I’m all about,” she said. “I’m not going over there to start fighting. I believe we should work together to find solutions.”

She also explained that she had previously proposed reducing the county gasoline tax as a way of giving something back to residents. “I felt that was a way that the average person that drives could see that [benefit] right away,” she said, although she admitted it would only go to those who have cars and even then would most help drivers with high-gasoline-consumption vehicles. Her personal reservations aside, she promised to explore sales-tax income sharing. “It’s not like I’m not going to visit that when I get to Carmel, because I know that’s what my constituents are asking for,” she said.

She cited economic development as another concern affecting both the town and county and pointed to tourism as a financial boon. “I think that with Cold Spring being the gateway [to area tourism] this is the way for us to bring in revenue without changing the character of our community,” Scuccimarra said. “But we have to be mindful of our citizens. We don’t want it to stress our community. It’s going to take some planning on how to lessen the impact.”

Asked about challenges facing Philipstown and how the county might help address them, Scuccimarra replied with no hesitation: “Butterfield,” a reference to the proposed redevelopment of the old hospital site in Cold Spring, a project causing considerable controversy. “For years we’ve been crying that we don’t get services,” she said. “The county is willing to come over and give us services,” at Butterfield, in a proposed governmental complex also housing village and town offices and a senior-citizen center. “Let’s get busy. Let’s do something. Our seniors deserve services.”

Relations with the county

On another front, “one of the challenges for me is to not make this town feel like a stepchild” of the rest of the county, she said. She claimed that things bode well in that regard due to Putnam County Executive MaryEllen Odell, another Republican. Odell “has been here in the last year probably more than Bondi was in 20,” Scuccimarra said. Robert Bondi, also a Republican, was county executive for two decades before steppling down in early 2011. “The county is taking a new direction.  Things are definitely going to get better. And I’m going to make sure they do,” Scuccimarra said.

She cited her eagerness at working with Odell and Libby Pataki, county tourism director, another Garrison resident. Nonetheless, despite her admiration for Odell, she said she would be able to effectively stand up to the county executive and fellow Republicans in Carmel if she believes it necessary for the good of Philipstown — and the county itself. They will “agree to disagree — and get the job done,” she said. “I will be a strong advocate for Philipstown.”