A mother is entitled to do many questionable things, but these don’t include refuting her children’s opinions about their own firsthand experiences. Nonetheless, I do this all the time when it comes to food. My kids will say, “I don’t like such-and-such,” and I’ll reply, “No, you do, actually. You just haven’t had it made properly yet.”

Whenever I do this, a part of me balks at my arrogance. I think, you really are a horrible person, Celia. But here’s the thing: I’m also right most of the time. So it’s confusing.

Anyway, one day this past August, not long after the boys had come home from summer camp, they were in the kitchen with me and one of them asked what I was making. “Quinoa,” I said.

They made faces. “I don’t like quinoa,” one of them said.

“Me, neither,” said the other. 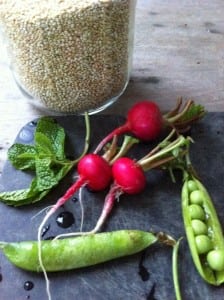 See above if you are wondering how I replied. I was especially confident about this one because, having cooked at a sister camp to theirs, I had seen firsthand how quinoa (you pronounce it KEEN-wah) was typically prepared by the young enthusiasts who staffed the camps’ kitchens.

I cannot now remember what I added to the quinoa salad I made that day, but I do recall that everyone liked it a lot, which made me feel better about my maternal qualifications.

What I didn’t tell the boys is that I’d gone through the same thing myself. For the longest time, I disliked quinoa, and willfully ignored its stellar credentials. Since it first began appearing in North America in the 1980s, it has been touted as a miracle grain, and with good reason: The protein in quinoa includes a full complement of amino acids, making it more complete than that found in any other grain.

And that’s just the beginning. I’ll invite a Purdue University website to chime in here: “Quinoa grain has a lower sodium content and is higher in calcium, phosphorus, magnesium, potassium, iron, copper, manganese, and zinc than wheat, barley, or corn.” A veritable mouthful of goodness! But eh. It tasted awful, like cold, gluey, bitter oatmeal. Besides which, quinoa had this quasi-mystical aura around it — an “ancient grain” for the spiritually virtuous. 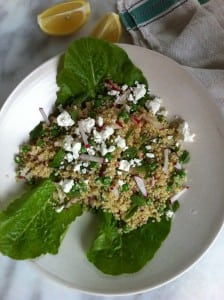 And so I made peace with the fact that I would go through life without ever enjoying the miracle of ancient quinoa. Then I learned how to make it well. It’s quite easy, actually. The key is that you don’t cook it like rice, allowing all the water to be absorbed by the grain. You cook it like pasta, in a generous, boiling potful, for 9 minutes, no more. Then you dump it in a strainer, rinse it under cold water until cool, and leave it in the strainer to drip dry.

The result is delicious and slightly nutty, with a texture that sort of pops in your mouth. Quinoa can be combined with almost any combination of vegetables, fruits, and herbs that you like. (One of my favorites is grapefruit, mint, and red onion, with toasted hazelnuts if I have some on hand. Roasted beets, goat cheese, and chopped rosemary is also nice.)

Last Sunday, I impulsively invited some friends over for dinner after a soccer game. I had beef to throw on the grill, and lots of potatoes for a potato salad. But when I began peeling the boiled potatoes, I discovered that over half of them were gray and rotten inside. In a panic, I rifled through the refrigerator, but nothing seemed to go together.

Then something clicked: I had radishes, mint, peas, watercress, and — did I? yes! — feta cheese. They were springtime ingredients that had all made a final showing at local farms, and I thought they’d be perfect together, combined with quinoa and a few salad greens. So I mixed it all up, and you know what? I was right.

You can replace the vegetables, cheese, and herbs in this salad with any combination you like — roasted or raw.

1 tablespoon lemon juice, or to taste

1. Fill a medium pot with water and bring to a boil over high heat. Add the quinoa, return to a boil then reduce to a simmer and cook 9 minutes, adding the fresh peas (if using) after 2 minutes, or the frozen peas (if using) after 7 minutes. Drain the quinoa and peas in a strainer, then rinse with cold, running water, until the quinoa and peas are completely cool. Leave to drain while preparing the other ingredients.

2. Meanwhile, place the minced onion, if using, in a small bowl with vinegar and enough water to cover. Set aside, then drain after 10 minutes.

3. Trim the tops and tails from the radishes, cut lengthwise into thin slices then lay slices flat and cut crosswise into thin batons.

4. In a bowl, combine the quinoa and peas with the olive oil, lemon juice, and salt, and toss to coat well. Add the radishes, feta, mint leaves, and drained minced onion, and toss gently. Taste and add more salt, olive oil, or lemon juice if needed. Serve on a bed of watercress or lettuce leaves.