On Saturday, Oct. 27, when Sandy was far away off the coast of Florida, I stocked the woodpile and prepared a large salad for lunch. Although it included meat and cheese, I refused to call it a chef’s salad — an impostor of a name. 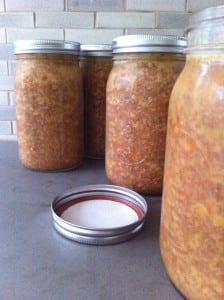 Besides, a more suitable title for my version would have been Impending-Power-Outage Salad, because it served primarily as a vehicle for using up several things likely to go bad quickly if we lost electricity: a few heads of lettuce, some herbs and scallions, an already soft avocado, a handful of roast vegetables, and various of those aforementioned meats and cheeses. I tore up an old baguette and pan-fried the pieces in olive oil and salt for croutons. All these things were placed in separate little serving dishes, so that each child could compose a plate devoid of his or her own personal horror ingredients.

Speaking of edible horrors, FoodSafety.gov, a website maintained by the Center for Disease Control, the Food and Drug Administration, and the U.S. Department of Agriculture, among other groups, says that the contents of a refrigerator are safe for a mere four hours after a power outage — if the door isn’t opened. After that, you can toss out all your meats, dairy products, soft cheeses, prepared salads, cut fruits, mayonnaise, and eggs.

Of course, it’s the government’s job to err on the side of caution and assume that these foods could have been contaminated with microscopic amounts of salmonella or e. coli, which would start breeding like mad the moment the temperature topped 40 degrees F. But I know folks who keep eggs at room temperature on purpose, and I have left warmed milk sitting on the counter for 24 hours to turn it into yogurt. I wasn’t worried. 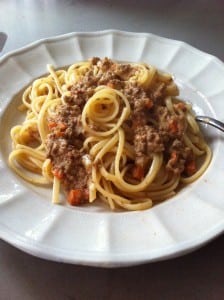 On Sunday, Sandy trudged past South Carolina while I did a few loads of laundry and hung them on the line to dry in the gentle, ominous wind (our dryer, irritatingly, having broken down last week). At midday, the boys won their soccer game against Larchmont, and that evening I made two incompatible kinds of vegetable pancakes for supper: chard fritters topped with a yogurt-mint sauce, and smashed-potato scones with smoked salmon, thereby crossing off several more perishables from my mental must-eat list.

On Monday, Sandy gained strength, the radio announcers gained bombast, and Dosi and I retrieved 5-gallon jugs from the crawl space under the kitchen and filled them with water. Only then did my state-of-emergency cooking begin in earnest. I baked up a tortilla pie (fine at room temperature) and began preparing Bolognese sauce. Spaghetti Bolognese is the thing my boys have most consistently requested for their birthday dinners over the years.

It is not fancy, but its flavor is complex and rich in the way that simple ingredients become when simmered together for a very long time — which, thanks to a gas stove, they could do even by candlelight. It also fills the house with the most comforting, magnificent aroma, something I thought we might appreciate once Sandy made landfall.

Which she did that evening, turning abruptly west some 200 miles to the south and wrecking havoc all around.

By now, we all have our own Sandy stories — indeed, most of my friends seem to be accumulating portfolios of stories from the various hurricanes, blizzards, and odd tornadoes that have visited this region in recent years.

My family was lucky: The lights blinked out a few times but came back on, a large tree uprooted itself and lunged towards the house but missed, and we ate well. Best of all, we now face November with a very well-organized refrigerator and a freezer stocked with a gallon of leftover Bolognese, ready for the next storm.

Makes 2 quarts sauce, enough to serve 4 with sauce left over.

1. Finely chop onion, carrot and celery (or, if you’re in a hurry, rough-chop them then pulverize them in a food processor). In a heavy-bottomed saucepan or Dutch oven over low heat, cook the bacon or pancetta, if using, until all fat is rendered and the bacon is just brown. Add olive oil (if the bacon is very fatty, you can skim it out, or reduce the olive oil) and the chopped vegetables, raise heat to medium, and cook, stirring frequently, until onion is translucent and soft.

2. Add ground beef or beef and pork, breaking it up with a spoon, plus ½ teaspoon salt, the pepper and the allspice. Cook until meat is brown.

3. Add the milk. When it begins to simmer, reduce heat to low and cook at a gentle simmer, stirring occasionally until the milk has mostly boiled away, about 30 minutes. Add the white wine and cook as you did with the milk, until it has mostly boiled away. Mash the tomatoes and juice; add to the pot, and bring to a simmer. Reduce heat to low, and allow sauce to cook very gently at barest simmer, at least 3 hours or up to 5, stirring every 15 minutes or so. Season to taste with remaining salt.

4. Just before the sauce is done, bring a pot of water to boil, salt it generously, and boil pasta until 2 minutes shy of time on package directions. Dip up 1 cup of the pasta water and set aside, drain the pasta and return it to the pot with the reserved water and one cup of the sauce, and cook over medium low, stirring constantly, 2 minutes. Add the cream, if using, to the remaining sauce. Serve pasta with sauce on top, accompanied by lots of grated Parmesan cheese.