Another trip to drop off much-needed supplies to Hurricane Sandy’s victims was made on Saturday, Nov. 10, this time from Cold Spring to points on Staten Island. A group of eight volunteers in three loaded trucks from Beacon and Cold Spring saw residents along the shores still struggling without power and spending their daylight hours cleaning out the wet and molding remains of flooded houses and basements. 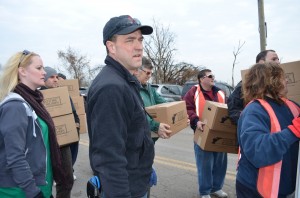 Christine Peterson, left, and Ryan Barkman, center, stood among other volunteers to load Barkman’s van with supplies from the Oakwood Heights VFW to deliver to homes affected by Hurricane Sandy. Photo by J. Tao

Laurie Marigliano and Ryan Barkman, both of Cold Spring, drove their own trucks full of donations, caravan-style, while Michael Bowman of Nelsonville headed a separate trip in his truck. After making a drop of some supplies to a restaurant in Tottenville where supplies were available to those who needed them, Marigliano, Barkman and four other volunteers made their way along the shore in search of neighborhoods in need.

They stopped at the VFW Hall in Oakwood Heights, which was running on generators as an emergency relief center, receiving and distributing donations, cooking free hot meals, and offering charging stations. Many volunteers were gathered there, some to help clean homes, others organizing and distributing supplies. Some spontaneously helped direct traffic and unload donations. Residents, some of them crying, came to pick up food, toiletries, and cleaning supplies.

After unloading the bulk of the donated supplies, which came from various organizations and individuals in Philipstown and other parts of Hudson Valley, including Boy Scouts in Peekskill and the rowing team of the Newburgh Free Academy, the six Beacon-Cold Spring volunteers loaded up Barkman’s Sprinter with boxes of food and toiletries donated by Feed the Children, an international relief organization, to distribute to homes in the neighborhood.

Making their way down the streets, some still flooded, the volunteers saw homes marked with red signs declaring them unsafe — one with an entire wall missing — and many others with yellow signs indicating that people were allowed to clean inside during the day. 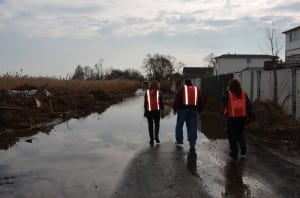 Volunteers from Beacon and Cold Spring make their way through a flooded street in Oakwood Heights on Staten Island to deliver supplies. Photo by J. Tao

Most people they passed asked primarily for bottled water and bleach; some wanted tools and extension cords, which were not available. One woman said she had not eaten a hot meal in days, in her earnestness to get the cleaning done, even though the VFW was only a few blocks away.

One man expressed his gratitude to the volunteers for a pair of work gloves and cleaning supplies, because then he wouldn’t have to leave his house and belongings open to looters. Another asked for a pair of socks, because he hadn’t been able to change his for days.

A couple of volunteers asked where the nearest porta-potties were, because there was no working plumbing in the area. And as the day wore on and the sky grew darker, more requests were for flashlights and batteries.

The ongoing  local donation drive, organized by Christine Peterson through the Facebook page Donation Drive for Sandy Victims, has collected and delivered to New York City several truckloads of food, batteries and flashlights, toiletries, blankets, clothing, cleaning supplies and other items. Their first trip was made Saturday, Nov. 3 to the Rockaways in Queens, and the second on Monday, Nov. 5 to Red Hook in Brooklyn. 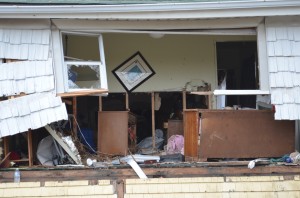 The front wall of this house in Oakwood Heights on Staten Island was torn off by Hurricane Sandy. Photo by J. Tao

Barkman had made a trip to deliver donations to Staten Island on Wednesday, Nov. 7, going door-to-door and putting supplies into the hands of people who needed them. He had reported before this trip that cleaning supplies and contractor bags were the most-needed donations, which remains the case in most of the affected areas.

Donations are still being accepted at the Cold Spring Firehouse at 152 Main St. Food, water, blankets and baby items are still in need, but they are not accepting any more clothes except for winter coats and the like. For the next trip to the Rockaways on Wednesday, Nov. 14, they are asking mainly for cleaning supplies such as contractor bags, mops, brooms, shovels, work gloves, bleach or other cleaners, and paper towels. A trip to New Jersey is planned for later this week.

Christine Peterson, left, and Ryan Barkman, center, stood among other volunteers to load Barkman’s van with supplies from the Oakwood Heights VFW to deliver to homes affected by Hurricane Sandy. Photo by J. Tao

The front wall of this house in Oakwood Heights on Staten Island was torn off by Hurricane Sandy. Photo by J. Tao

Kathy Spinelli, one of the volunteers in the Beacon/Cold Spring group, brings donated supplies into the Oakwood Heights VFW Hall. Photo by J. Tao

Volunteers from Beacon and Cold Spring make their way through a flooded street in Oakwood Heights on Staten Island to deliver supplies. Photo by J. Tao