At 7 p.m. on Monday evening, Nov. 19, the Nelsonville Village Board held a public hearing on revising the local law on flood damage prevention, to remain in the National Flood Insurance Program (NFIP). They also issued some reminders for residents: bagged leaf pickup will occur on Dec. 1, and the snow ordinance banning overnight parking during snowstorms begins Dec. 1 and ends March 31. 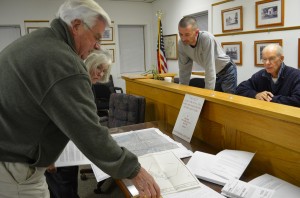 Robert Lusardi, village attorney, had drafted a new local law to adopt FEMA’s new Flood Insurance Study and Flood Insurance Rate Maps. The draft law will be sent on to the Department of Environmental Conservation (DEC) before the Dec. 4 deadline for their review. Once approved by the DEC, the law will be sent on for approval by FEMA before their deadline of Feb. 1. Without these changes, the village would be in danger of suspension from the NFIP on the map’s effective date of March 4.

Mayor Tom Corless explained that the new flood maps are more detailed but have not changed substantially from last year, showing flood areas surrounding Foundry Creek. As of Monday evening, the village office only had one copy of the maps in their possession for viewing, but Village Clerk Pauline Minners said she would order more. The hearing closed without much public comment.

Minners read the snow ordinance that bans overnight parking on village streets 12 – 6 a.m. from Dec. 1 through March 31. Residents must call 845-265-2500 after 5 p.m. to find out whether the ban has been suspended for that night. A limited amount of winter parking is available on North Pearl Street where indicated. All vehicles in winter parking should be removed by 9 a.m. so that the lot can be cleared.

Corless reminded residents that if there is no power and the phone service cannot be contacted, there is absolutely no overnight parking on public streets unless the village suspends it.

The mayor also requested that anyone leaving the village on a day on which it snows or is predicted to snow, to please move cars off the street onto driveways before leaving (and not waiting until midnight when the ordinance begins) so that the streets can be cleared properly throughout the day. He emphasized that doing so would help residents themselves, in that they would not have to shovel their driveways either.

The village is currently looking to appoint a village resident as parking enforcement officer.

In addition, snow must not be thrown into the roadways, in order to keep them clear. Property owners and/or occupants must also keep their sidewalks clear of snow and ice within a reasonable period of time after snowfall.

During the regular board meeting, Corless and Trustee Ande Merante both commended Central Hudson’s tree trimming prior to both storms that hit the area in the last month, which they believe helped the power stay on in much of Nelsonville, despite some residents’ complaints about the way in which they had trimmed the trees. Corless added that only the very top section of Healy Road had lost power during Hurricane Sandy when a small tree came down on some wires, which was repaired in a timely manner by Central Hudson.

Trustee William Duncan mentioned that with the stoppage of work on the water-main relining project for the winter, residents should continue to clear leaves and debris from catchbasins that are covered by pipes outside their homes, to make sure that water drains properly. Corless also said that Mainlining Services Inc. did a good job on the relining project, mentioning that he had seen part of an old pipe they had cut out that was so clogged, water was flowing through an opening only as wide as a quarter.

Corless reported that Pidala Construction has patched many potholes around the village, especially around Healy Road, but could not finish all work due to inclement weather. They will be finishing up the job soon.

The board voted to adopt new municipal accounting software from Williamson Law Book Co., which was demonstrated in the office about three weeks ago. Minners said it was the least complicated program she has used, pointing out that it would correct flaws pointed out by the audit last month. The total cost for the software, maintenance fee, and two days of training for Minners was $5,858.