The Cold Spring Village Board Tuesday night reviewed draft rezoning intended to protect the village from any redevelopment schemes for the old Butterfield Hospital property that fail to implement the concept plan created with public input over the last several months. 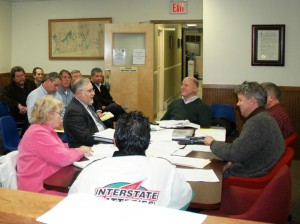 As residents and developer Paul Guillaro and his colleagues pay close attention, the Cold Spring Village Board and attorney Steve Gaba continue their work on draft rezoning for the Butterfield property. Photo by L.S. Armstrong

In two separate but similar drafts given the board, the B4-district zoning changes needed for the proposed project would only become valid if the developer “substantially” adheres to the concept plan. Should redevelopment take a different form, the new zoning, setting up a B4-A Medical and Healthcare Facility Mixed-Use district, would apply, and the current B4 provisions would remain in place.

These limit the site to medical, R1 single-family residential, and select other uses, like village-government offices. The basic B4 zoning authorizes senior-citizen housing only by special permit and does not provide for mixed-usage.

Paul Guillaro of Butterfield Realty LLC, the parcel’s owner, proposes to tear down the decrepit  hospital and build a complex consisting of three single-family homes on Paulding Avenue, condominiums for retirement-age buyers (senior-citizen housing), an intergovernmental municipal building-cum-community/senior center, post office, and an office-retail “square” along Route 9D. To proceed, he needs the zoning changes, the subject of several Village Board sessions to date.

The Village Board is expected to go on with its rezoning work next week, with Village Attorney Stephen Gaba providing an updated version that further merges the most recent drafts into a coherent text. The Village Board tentatively scheduled a public hearing on the draft law for Jan. 29, allowing time for feedback from the Planning Board and similar sub-boards.

Gaba provided one of the drafts discussed Tuesday; the other came from the Butterfield Realty team. Along with making the zoning contingent upon adherence to the concept plan, both drafts call for allowing senior-citizen housing under the normal approval process, not the more complicated special-permit application. The developer’s draft also would establish an R1 One-Family-Residence District along Paulding Avenue, an idea endorsed by Gaba as well in prior iterations. Likewise, the two Dec. 11 drafts also demand a 75-foot setback for any structure not a one-family home on a bordering village street, such as Paulding Avenue.

In opening the discussion, Gaba defined the main question as “how can the village have some security that, if it makes this zoning change, it’s going to end up with something that looks very much like the concept plan?” The answer, he maintained, is “to make the zoning conditional.” His draft law and that from Butterfield Realty both state that “in the event that the property is not actually developed substantially in accordance with the concept plan, then the zoning map designation will revert to B4.”

If for some reason Guillaro’s redevelopment does not proceed, both draft law versions state that “then the property will revert to B4 zoning for any other development.” This “conditional zoning” approach “solves a lot of problems from the village’s point of view,” Gaba explained.

“This zoning works only so long as there is implementation substantially in accordance with that concept plan,” Richard O’Rourke, a Butterfield Realty lawyer, concurred. Until Butterfield Realty offers a detailed site plan for its anticipated structures, “we don’t have the zoning.” Overall, O’Rourke said, the conditionality stipulation “provides you with the assurances you wanted” while also allowing Guillaro to move forward.

The rezoning drafts do not say what constitutes “substantially” conforming to the concept plan.

Although its previous suggestions had not included the Paulding R1 strip, Butterfield Realty now advocates “that we zone a strip R1” along with maintaining a 75-foot setback, said Tim Miller, a planner working with Guillaro. He said the setback and R1 designation would safeguard Paulding and “protect the people for the long-term future. If that’s not zoned R1, you could do something within the setback.” The two-prong approach also serves open-space needs, Miller said.

John Cronin, representing the Paulding Avenue neighborhood, said that the rezoning language is “substantially what we were after. We’re very pleased.” They remain interested in ensuring adequate open space, he added.

Such public input “is helping us get to a better solution quicker,” Mayor Seth Gallagher remarked.

As Tuesday’s discussion continued, uncertainty emerged as to the timing of a public hearing on the rezoning and the role of village sub-boards. Likewise, the unresolved issue of demolition of the old hospital hovered over the room. “We don’t know whether we can build this because we still have a wild card out there, the Historic District Review Board (HDRB),” O’Rourke said.

Holding jurisdiction over tear-downs, the HDRB is slated to announce its decision on Dec. 19. So far it has seemed totally opposed to the demolition, or at least extremely reluctant to condone it, making a case for the historicity of the entire hospital building.

Miller cited the Butterfield Realty belief “that there would not be an adverse impact on the historic resources” of the village “if that hospital were removed.” For purposes of fulfilling New York state requirements, he referred to both the Planning Board and Historic District Review Board as “interested” agencies, but not “involved” agencies, in the rezoning. “They’re invited to comment, but they don’t actually have approval over the instant [pertinent] action, which is the zoning. You’re really the only agency that has anything to say about this, ultimately,” he told the Village Board.

The village attorney objected. “He and I disagree on that” claim about sub-board participation, Gaba said. However, Gaba also informed that Village Board that while it may get feedback from the Planning Board, “you’re going to have to be the ones to decide, in the end” how to proceed and by what steps. “You’re going to have to take a hard look.”