Of all the holidays, Christmas takes the prize when it comes to the number and variety of traditions associated with it. There’s the music, and shopping, and the tree, and Santa Claus, and midnight Mass, and giving and receiving gifts, and the big meal with family and friends. At first glance it may seem like a template, a cookie-cutter holiday. But when you ask around, you quickly learn that almost every family adds its own customs or adapts traditions that are especially near and dear to them. Christmas, it seems, is a very personal holiday.

Matt Mitchell is a good example of how Christmas traditions begin early each year for some families. “We get our tree the day after Thanksgiving every year,” Mitchell said. “We always go up to Red Hook and cut our own.” For the Mitchells, Christmas gifts are always opened on the evening of Christmas Eve. “One of my uncles always played Santa Claus when I was young — but eventually we figured it out!” he said.

For many, Christmas present is forever linked to Christmas past. Leonora Burton grew up in Wales, and her memories of Christmas there as a young girl define what for many may be the true spirit of Christmas. “I loved Christmas. My father used to collect gifts, through the Masons, I think it was,” Burton said.

Every Christmas morning, while his wife stayed home to prepare the festive dinner, he’d take his four daughters to Royal Gwent Hospital in Newport, where together they would distribute gifts to patients. “And we’d spend time with them. I loved that so much,” Burton recalls. After the hospital, they would return home and open just one gift before listening to the Queen’s annual 3 p.m. radio address on the BBC. Then it was dinner and time to exchange gifts. Burton’s sons are adults now, but she still makes them wait until afternoon to open their presents.

Makaria Gallagher treasures a tradition that dates back to her grandmother in the 1940s. Towards the end of World War II, Paula Tichy used to send “care packages” to a woman in Czechoslovakia. “The woman wanted to thank my grandmother for the packages, and the only thing she could think of was to make her an entire crèche out of clay,” Gallagher said. The clay figures were not fired, and now, almost 70 years later, they are showing some wear, but Gallagher still displays the crèche every Christmas. “When the woman shipped it to my grandmother, she wrapped each clay figure in a sock. We still have the socks!” Gallagher said.

For some, Christmas means travel. Magali Charrom will spend 13 hours on the road on Christmas Eve in order to be part of her family’s traditional holiday celebration in Sackville, New Brunswick. “We’ll go to midnight Mass to hear the choir, then have a light seafood meal that night, and we’ll open just one present,” Charrom said. Christmas Day will involve “the whole family,” including aunts, uncles, cousins and their spouses. A turkey dinner with all the trimmings will be enhanced with oranges, walnuts, lychee fruits and tourtière, the traditional French-Canadian meat pie.

David Lilburne is a native of Australia. He won’t be traveling down under for the holiday, but he always inserts a bit of Aussie flare into his family’s Christmas. “In Australia, we always had big presents, and you had to follow a string to find them,” he said. The Lilburnes have carried on that tradition by having at least one big present each year.

A red ribbon that starts inside their home lead their kids, now grown-ups, to a present tucked away somewhere outdoors. “Once, it was a trampoline; once, it was Johnny’s first car,” Lilburne said. The car was hidden on his neighbor’s property. In some years, the ribbon has led to a gift that was a joke. “The kids used to love it,” he said.

For Alanna (Maguire) Hamel, the tradition she loves best is “the pickle thing.” Her husband Bob carries on a German tradition that goes back several generations in his family. “An ornament that looks like a pickle is hidden somewhere in the Christmas tree, and the kid who finds it gets an extra gift,” Hamel said. Bob Hamel’s Christmas ornament pickle is 111 years old. 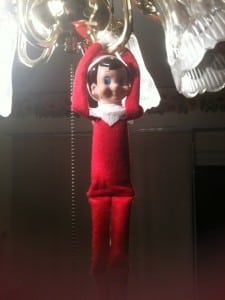 Every morning during the month leading up to Christmas, 7-year-old Zachary Cannova crawls out of bed to search for Elf James, seen here hanging from the chandelier in the Cannnova home.
Photo courtesy of Caryn Cannova

“Elf on a shelf!” responded Caryn Cannova, without hesitation, when asked about her favorite Christmas tradition. Each day during the month before Christmas, a small elf magically appears somewhere in her home, and it’s her 7-year-old son Zachary’s job to find it. “He gets up every day and looks for it,” she said. The elf, which the Cannova’s named Elf James, reports to Santa Claus on a daily basis as to whether Zachary has been naughty or nice that day. He then returns the next morning to a new hiding place and can turn up anywhere, from in the bathroom to hanging from the chandelier.

Favorable reports to the North Pole aren’t the young boy’s only incentive. “Every time he finds Elf James, I give him a one-dollar coin,” Cannova said. While Zachary has been very successful at finding Elf James, he has also paid close attention to one hard-and-fast rule that is part of the tradition — he is not ever allowed to touch the elf.

People who work on Christmas Eve face an added seasonal challenge and sometimes have to adapt traditions accordingly. Mike Vierra is employed in the restaurant business and often doesn’t finish work until 11 p.m. on Christmas Eve. “I’m Italian, and we used to have the seven fishes,” he said. “But we don’t have a big family now — plus I’ve worked every Christmas Eve for the past 10 years.” Vierra said he and his mom have developed a new tradition over the years. “It’s evolved to an extreme — it’s now sushi, sashimi and potato pancakes.” Their late-night dinner is always followed by a trip to the movies on Christmas Day.

For families like Mitchells, the Christmas season begins with finding the tree, but for others, it doesn’t really officially end until the tree is disposed of — sometimes not for months after the holiday. Lisa Diebboll and her family say goodbye to their beloved seasonal conifer with an annual burning of the Christmas tree. It can take place anytime from around Easter to mid-summer. “We’ve been doing it for at least 15 years,” Diebboll said. “Family members join us, sometimes friends join in, too. It’s great!” Diebboll said that a sandbar in a creek on their property provides the perfect setting for the annual ceremony.

What’s your family’s favorite, oldest or most creative Christmas tradition?