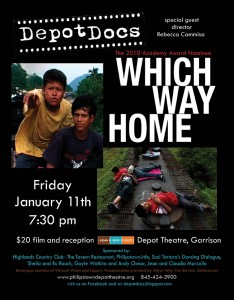 The Depot Theatre in Garrison will show for its next Depot Docs Film at 7:30 p.m. on Friday, Jan. 11, Which Way Home, a 2010 Academy Award Nominee for Best Documentary Feature.

As the United States continues to build a wall between itself and Mexico, Which Way Home shows the personal side of immigration through the eyes of children who face harrowing dangers with courage and resourcefulness as they endeavor to make it to the U.S.

The film follows several unaccompanied child migrants as they journey through Mexico en route to the United States on a freight train the call “The Beast.” Director Rebecca Cammisa tracks the stories of children like Olga and Freddy, 9-year-old Hondurans who are trying to reach their family in Minnesota; Jose, a 10-year-old Salvadoran who has been abandoned by smugglers; and Kevin, a canny, streetwise 14-year-old Honduran, whose mother hopes he will reach New York City and send money back home.