Plans by the Putnam County Tourism Office for a world-class bicycle event in Cold Spring hit a speed bump this week when several Main Streets merchants opposed anything — like closing Main Street to traffic, even temporarily — that could decrease business.

One protesting gallery owner even threatened a sit-in of sorts. 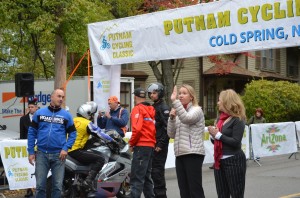 The Putnam Cycling Classic is scheduled for Sunday, May 5. The 2012 version, Oct. 14, produced hard feelings from some merchants over parking snarls, traffic flow, access to shops, and similar concerns. The October event drew nearly 200 cyclists who began in the village and then biked to eastern Putnam County and back.

In comment this week, some merchants were anything but enthused about the classic’s return.

“Bijou Galleries is flabbergasted and disappointed that Putnam County Tourism would propose an event which will so seriously have a harmful effect on us, the people who keep this village going, and completely opposed to closing Main Street even for part of a day for the purpose of a bicycle race,” the Bijou’s Michael Timm declared. He added that “if this goes ahead, I would be happy to explore some sort of ‘civil disobedience.’ Maybe we could do a ‘middle of Main Street’ sale since it will be closed anyhow.”

“There is no way I would be in favor of having another event like this in Cold Spring,” added Patty Villanova, of the Side Effects NY boutique. “Things are hard enough as it is. The last bicycle race in October was a complete disaster as far as I’m concerned. We lost a beautiful weekend Sunday because our customers didn’t have access to Main Street and our shops.”

The Tourism office has assured everyone the street will not be completely shut down for the May race. “We won’t be closing off Main Street, and if we close a portion of it off, it will be done after public information sessions and only be closed for the time necessary to start and finish the race,” Putnam County Tourism Director Libby Pataki informed Philipstown.info on Monday. A Tourism Office news release likewise assured everyone that “we do not intend to close off all of Main Street.”

Concern about a meeting

If the race has roiled local waters, so did a meeting Pataki held at her Garrison home last Friday night (Jan. 4) with business owners to get their perspectives. Most elected officials and the press were supposedly excluded from the get-together, prompting after-the-fact questions because attendees included a pastor who is also a news reporter and past or potential candidates for local office. 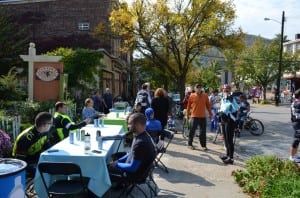 Cyclists were treated to a pasta lunch outside Cathryn’s after finishing the Putnam Cycling Classic on Oct. 14. Photo by J. Tao

Pataki explained on Monday, Jan. 7, that she hosted the gathering to talk candidly to merchants and other stakeholders, such as clergy — whose Sunday services could ostensibly be affected by hordes of competitive bicyclists racing past their churches. “I really wanted to hear the merchants out,” she said. “I wanted the first meeting to be informal in order to allow everyone to really speak freely and openly without any concern whatsoever for being mentioned in the papers.”

Despite Pataki’s assertion, a front-page article and photo reporting on the meeting and heralding the bicycle event appeared under Tim Greco’s byline in this week’s Putnam County News and Recorder.

The Village of Cold Spring has adopted a role as a referee of sorts. In December, the Village Board scheduled a workshop on aspects of the event, including policing. Originally slated for Jan. 15, the workshop has been tentatively rescheduled for Feb. 5.

More immediately, Pataki intends to convene another get-together under Tourism Office auspices, probably on Jan. 29, and has alerted the news media and others. The first session “covered a lot of ground, and it was the beginning of what I hope will be a most productive ongoing dialogue,” she said.

One local businessman has urged his disgruntled peers to stop complaining and pitch in. “Would everybody please lighten up on this?” asked Tom Rolston, of the Depot Restaurant. “The thing will be more organized than last time, with provisions made for handling the traffic. This is a world-class event that could bring the national biking competition to Cold Spring in 2014. Instead of everyone immediately saying ‘No’ to this thing, let’s work together to see what can be accomplished. The damned village would take a negative approach to the Second Coming.” He also urged merchants to “take a look at Beacon” and its burgeoning activities. 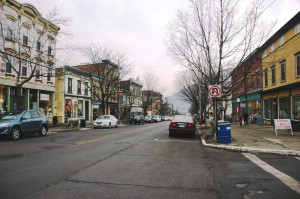 Plans for the bicycle race in May caused consternation on Main Street in January. Photo by L.S. Armstrong

Pataki noted that for Beacon’s Community Day “the entire street was closed off, a car show was held in the middle of the street, people were seven deep on the sidewalks, the merchants were thrilled, and a great time was had by all. I don’t think we will have the same end result because our parameters will be based on the wishes of our merchants, restaurateurs, and those on the race routes. But we sure are giving it our best efforts.”

Overall, she said, the county is “really looking to do something on a high level and, again, my job is to make it all work. If there are hiccups, I intend to smooth them over.”

Cold Spring Mayor Seth Gallagher said Tuesday that the Village Board looks forward to the February workshop, bringing together race planners, the merchants, residents and police. “Hopefully, we’ll be able to iron out any problems,” he said. He was not invited to the Jan. 4 meeting but expressed no recriminations. “The meeting we want to have is one where everyone comes to the village hall” for a wide-ranging discussion in public, he said.

Gallagher’s counterpart at the town level, Philipstown Supervisor Richard Shea, also was not invited to the Friday meeting. But according to Katie DeMarco, Pataki’s assistant in the Tourism Office, Deputy Mayor and Trustee Bruce Campbell received an invitation. Campbell works with the village Recreation Commission in coordinating events on village property.

Pataki said that Putnam County outbid other jurisdictions for the race. The public will not pay Putnam Classic expenses, she said. “The race is held with donated monies. That is my job, fundraising. It does not cost the county or its taxpayers one nickel. We ended up with a profit of approximately $5,000 last year, all of which was put into Tourism’s budget for other targeted initiatives, such as end-of-year advertising to help businesses with their holiday sales.” At this stage, the exact costs of this year’s race, number of entrants, and other details are undetermined, she said.

The Tourism Office news release acknowledged the “misinformation” wafting about and cited its own “responsibility for good communication and for making sure that our businesses thrive and prosper.” The news release outlined upcoming activities, including development of maps, a look at traffic routing, the follow-up meetings, and promotional efforts. “Come join us to work on a marketing plan which will further showcase our beautiful village and county,” the Tourism Office suggested.