Philipstown has its own brand of “on demand.” In one of the ways things can organically happen here, Julie Tooth, a painter and graphic designer, was approached by some of the “moms of young children” she had met casually at the Garrison Café who asked if she would be willing to teach a preschool art class. 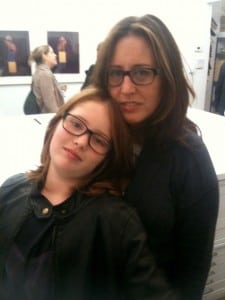 Julie Tooth and her daughter Issy

Tooth liked the idea and in turn brought the suggestion to the Garrison Art Center, where she had previously exhibited in both solo and member shows. The Art Center was immediately receptive and voilá — a new program was born: ARTtots, which Tooth will begin teaching on Wednesday, Jan. 16, in two sessions, from 10:30 to 11:45 a.m. and from 3:30 to 4:45 p.m., both in four-week blocks. It is hoped that the series will continue indefinitely.

The classes are billed as “an exploration in art for 3- to 5-year-olds. Budding young artists will explore ways to talk about, visualize and represent their world through drawing, and watercolors.”

Tooth said the classes will reflect her love of connecting art to nature. “We’re going to start with the seasons. We’ll read The Root Children, [which tells the story of] who are under the earth. They wake up and prepare for spring. We’ll talk about which colors remind us of winter, what animals are hibernating. We’ll see how the kids respond and follow along from there. We’re there to play with art and have the kids use their own thoughts.”

In keeping with the let-it-flow nature of the classes, parents can either drop off their children or stay, depending on the needs of the children, as Tooth, the mother of a 12-year-old, wants to make it easy on parents.

In addition to this series of classes, Tooth will also be creating fairy-theme birthday parties at the Art Center, arranged around either woodland or ocean settings. “All very rustic and earthy,” she said. “I remember collecting pinecones as a kid and wanting to take care of the earth.” 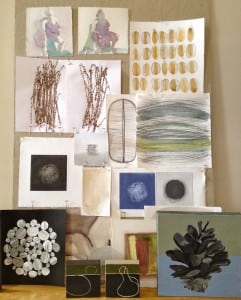 Collage of artwork by Julie Tooth

Tooth, who grew up in Irvington, always loved art. She spent 18 years living in New York City and became a graphic designer. During her city years, she “went to almost all the art schools there: I took etching and printmaking at Parsons; watercolors for five years at Cooper Union with [painter] Lisa Yuskavage; drawing at New York Academy of Art and painting classes at NYU grad school — the best thing I could have done.”

Making a studio out of the second bedroom in her apartment, like many before her, Tooth combined commercial and fine art. After moving to Philipstown about 13 years ago, Tooth moved her studio to the Skybaby Building off of Main Street in Cold Spring, where her husband, design consultant Gary Tooth, has his studio, Empire Design Studio. (He specializes in art books, high-end cookbooks and website design and has worked frequently with photographer William Wegman.) Tooth’s studio is now located in her home.

Tooth describes her own making of art “a craving you have to satisfy. Just making art gives you that kind of feeling that meditation gives people — just thinking about that and nothing else. I see it in my daughter and art, too — she has an infinite amount of ideas; they just come to her.”

Asked about the shapes that dominate many of her paintings, Tooth said they take on an “obsessive quality” for her. She said, “One shape I did a lot is sort of a square circle. I did these in my Rearview Mirror series. In those I would paint the whole canvas and then go back and select what I thought were the most dynamic — those that visually had something about them that worked.” Then she’d cover up the rest.

“I’m also very into observation,” said Tooth. “I did a series of pinecones, and I can feel a part of my brain working when I’m doing those and have to really look — keep looking — at the object and what I’m putting on canvas. It’s a totally different way of creating something.” 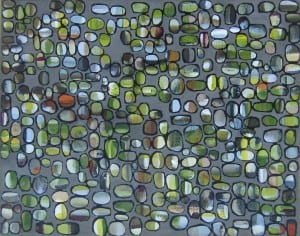 Tooth is also in the process of creating a line of children’s paper toys, which she developed a couple of years ago. Called the Woodland Creatures, it consists of a play set with four seasons and five characters — a squirrel, raccoon, chipmunk, bird and skunk, all of which fit into a little box. The creatures stand up like paper dolls, and the drawings are very modern; children can act out stories with them.

The idea came to Tooth a number of years ago when she was seeking something for her daughter to play with when traveling or in restaurants. She has lots of people who want to order them, and is planning on taking the marketing of them “off the back burner” shortly.

In the meantime, though, she is looking forward to starting ARTtots, calling Barbara Smith Gioia and Carinda Swann of the Art Center “open and flexible — great to work with. Kids have no reservations about expressing their ideas; to nurture that is hopefully going to be wonderful.”

The first four-week session of ARTtots begins on Wednesday, Jan. 16. For more information and to register, visit garrisonartcenter.org or call 845-424-3960.