A southbound car reportedly collided with a parked vehicle on Chestnut Street on Friday afternoon, leaving debris scattered on the ground and drawing police and firefighters and two ambulance services, but reportedly caused no serious injuries. 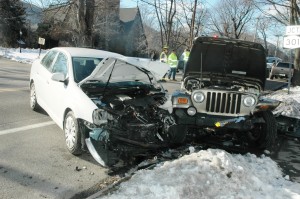 The two damaged cars remain in the street as fire and police manage the scene. Photo by L.S. Armstrong

The unidentified driver of the car in motion was taken into an ambulance from the Philipstown Volunteer Ambulance Corps, according to Beth and Justin Edelson, of 16 Chestnut St., whose parked Jetta was hit. Their car was parked in front of their home, pointed north, Justin Edelson said. “It was not pulling out; it was just sitting,” he said of their car.

They said they rushed outside when they heard a crash. “It was so loud,” Beth Edelson explained. “I thought something had fallen on the roof” of their house.

The Edelsons said the driver had told them that she had been en route to the Carolyn Lahey Pavilion for a doctor’s appointment when the accident occurred.