High school students from throughout the United States, its territories, and Department of Defense (DoD) schools are invited to submit their short videos to the DoD 60th Anniversary of Korean War Commemoration Committee (KW60) and the GI Film Festival to participate in a new educational outreach program, Heroes Remembered: Voices of the Korean War. 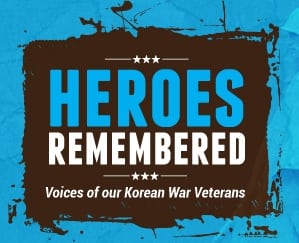 The Heroes Remembered program was created to encourage high school students to help preserve the stories of Korean War veterans. Five student videos will win a $500 scholarship and 2 VIP tickets to the 2013 GI Film Festival.

“We hope that Korean War Veterans share their stories and experiences of the war, while educating younger generations about the lessons of the ‘Forgotten War,’” said Col. David J. Clark, director of the committee.

Students should create a 3- to 5-minute documentary or narrative video that shares the stories of veterans from the Korean War. All entries must come from students attending high school in the U.S. and its territories or a DoD school. To submit, students are to use the submission link found on the GI Film Festival website.

“We are excited to see what students will submit. Their submissions will help KW60 catalog stories of Korean War veterans from every corner of the country,” said Brandon L. Millett, co-founder and president of the GI Film Festival. “We expect that the lives of both the students and veterans will be changed forever because of this experience.”

Korean War Veterans from across the U.S. are encouraged to participate. The submission period ends on March 1.