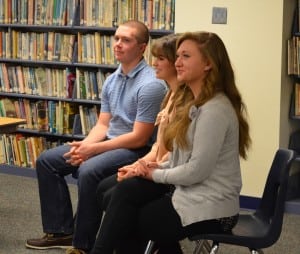 Highlights from O’Neill’s presentation include college credits available not only through 10 Advanced Placement (AP) courses but through four Syracuse University Project Advance (SUPA) courses; foreign language classes in Spanish and Chinese; technology programs that supply Nooks to all juniors and seniors and soon to all sophomores; student response clickers that give instant feedback to teachers on what students understand and what needs to be retaught; and college acceptances for current seniors to schools such as Princeton, Cornell, Columbia and Notre Dame.

Hard spoke to the transition to O’Neill from Garrison School. “When I was in my eighth-grade year thinking about which high school to attend,” Hard said, “I was completely stressed out, because you’re faced with the decision of, ‘Do I want to stay with my best friends who I’ve known since preschool or kindergarten and gone through these nine years of school with and just hold on to that familiarity?’ or ‘Do I want to go to a new school where it’s a little bit bigger, it’s a little bit different, I’m not really sure what to expect?’ Obviously I ended up choosing the latter, and I’m just so happy that I chose to do so.”

She said she was nervous before the first day of school, afraid of being the odd one out among a majority of kids who already knew each other, but she learned that since there are three different schools that feed into O’Neill (Highland Falls-Fort Montgomery and West Point as well as Garrison schools), many students felt the same way. “So everybody’s really relatable at O’Neill,” Hard said.

After O’Neill’s presentation, Garrison School Superintendent Gloria Colucci announced that she will send out a letter soon to parents inviting them to volunteer for a task force charged with investigating high-quality programs at other schools. This task force was originally suggested a few months ago by parents attending public workshops to revise the school board’s long-term goals. Now that the board goals were approved at their last meeting on Jan. 23, Colucci will create the task force in order to start making visits to other schools by March.

The task force, which is planned to include teacher volunteers, will report its findings to the education committee, who will then make recommendations on programs to the board.

As the school has used five snow days while the district only allotted three for the year, and since only one of those has been made up so far, the school must make up another snow day. Colucci said that Monday, March 25 — previously part of spring break — will be a school day.

In the case of another snow day, Tuesday, March 26, will be the makeup date.

Because a few of the 25 new children who registered for kindergarten at Garrison on Feb. 5-6 for the next school year are classified with special needs, the administration is proposing to form a self-contained class for kindergarten through second grade targeted specifically to students with communication needs.

Kathryn Rohe, chair of special education at Garrison School, presents to the School Board on Feb. 6.
Photo by J. Tao

The chairwoman of special education, Kathryn Rohe, explained that the class would have a maximum size of eight students, to be serviced by a full-time special education teacher and two aides. The class would follow a grade 1-2 curriculum that would be highly individualized to each student. The children would also have the opportunity to participate in general education class activities as well as specials (such as art, gym, etc.) with their peers. Without such a class, students with more intensive needs would have to go out of district to have their needs met.

The consortium agreement would allow primary students from Haldane Central School with similar special needs to join the class at Garrison. (Such an agreement would also allow Garrison students to join a self-contained class that Haldane has for grades 4-6.)

Since annual reviews are yet to be conducted for students, it is unclear at this time whether the numbers of students with special needs will justify the creation of a self-contained class, because some of those students may be declassified or require less intensive interventions than is currently indicated on their Individualized Education Programs (IEPs). Once the reviews are completed, a consortium agreement will be presented if enrollment makes the class feasible.

As has been the case for the past few meetings, it is too early for the school to come up with a budget, since there are still several unknowns. Colucci did report, however, that the largest increase in expenses comes from the employee retirement system and health plans — an increase totaling $185,000. The anticipated decrease in state aid to Garrison School, based on the governor’s proposed budget, appeared to be $56,000, but because of the state’s overstatement of some of the school’s expenditures, the actual decrease in aid is even larger — $106,000 — since the aid the school receives depends on how much it spends on certain items.

The budget situation will be explained in more detail at the first public budget workshop next Wednesday, Feb. 13, at 7 p.m.