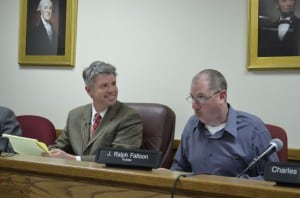 The Butterfield saga continued at the Cold Spring Village Board meeting on Tuesday, March 12 — Mayor Seth Gallagher’s last regular meeting of the Board of Trustees — when Village Attorney Stephen Gaba presented his draft timeline of the approval process for the development of the Butterfield Hospital property, which both developer Paul Guillaro and the Board of Trustees requested at the last Village Board workshop on Feb. 26.

Gaba informed the board that he estimates the approval process for the project, in the form it has been discussed for the past few months, to be about 10 months, if no significant issues come up. This includes two parts: first, the adoption of the local law (changing the zoning to allow uses such as intergovernmental offices and a retail square) and the State Environmental Quality Review (SEQR) of that law, which Gaba said could take five to eight months; and second, the site-plan review by the Planning Board and Historic District Review Board (HDRB) and the SEQR of that plan, which could take another five to nine months.

Gaba pointed out that doing one SEQR instead of segmenting it into two separate reviews could save about two months’ time in the process, but he said doing the single review at the beginning would require the applicant to spend “considerable time and expense in preparing studies, markups, plans that need to be reviewed to complete the SEQR before they even know if the local law that would permit the project to go forward is enacted.”

As Gaba and Trustee Matt Francisco noted in the meeting, putting a lot of money and work into a specific site plan at the outset, with no guarantee that either the zoning change or plan would even be approved, would probably not appeal to Guillaro, which is why the timeline shows two environmental reviews instead of one at the start. “It gives the applicant more certainty in terms of going forward with the SEQR review, but it’s kind of the long way around,” said Gaba.

Francisco was concerned about the legality of segmenting the SEQR. “Segmentation is not favored by either the courts or SEQR regulations,” said Gaba, but he stated there are legal grounds for segmentation in this case, “because we can’t really focus on the site-specific details, because the plan’s not in place; the reason the plan’s not in place is because there isn’t a law allowing the plan to be in place.”

To PUD or not to PUD?

Francisco asked whether it would take less time to approve a planned-unit development (PUD), which was Guillaro’s initial proposal for the property in the spring of 2012 before he withdrew it, citing frustrations over the process with the Planning Board. Gaba explained that with a PUD, the local law is drafted at the same time that the Planning Board reviews the project.

Gallagher responded that a PUD proposal would not take much less time and would be similar to the path of the single SEQR, requiring that the applicant present a lot of the planning at the beginning of the process.

Asked by Francisco about other options to speed the process, Gaba said a single SEQR could be done at the beginning, if the applicant were willing, and the Village Board could issue a generic Environmental Impact Statement (EIS). An EIS is required when the SEQR finds that the plan has potentially significant adverse environmental impacts.

Gaba noted that with a generic EIS, the board could establish thresholds for mitigating the environmental impacts, and further review would not be required unless the site plan was found to exceed those thresholds, in which case they would issue a supplemental EIS for that specific improvement. “That would cut your time down considerably, in terms of review,” said Gaba.

Cutting down on time

Francisco stated he was concerned because Guillaro had said he did not want to spend any more money “without some sense that there’s a way forward.” Gallagher disagreed, saying, “I think you’re taking an overly negative view that’s almost creating that situation.”

“He’s been frustrated with the lack of support from the board, you included,” Gallagher said to Francisco. “If you wanted to help him out,” he continued, “it would probably be the equivalent of cutting three months off of this timeline.”

Gaba cautioned the board, however, not to make promises to shorten the time necessary for approval. “If [Guillaro] comes back and he says, ‘Well, it says here that within the first 30 days you’re going to revise the local law and the concept plan and accept Part 1 of the EAF … I think that should say seven days.’ You can’t commit to do something within a particular amount of time, to cut it down that way,” Gaba said. He had stated earlier in the meeting that there are “some things that you’re just required to go through if you’re going to approve a project of this magnitude.”

Gaba said he would discuss the timeline with Guillaro’s attorney to see what they think, adding, “And if you’re right, Matt, you’re right.” 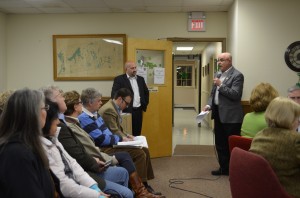 Earlier in the meeting, the Special Board presented a revised report on banning formula businesses and drive-thrus in the village, which will be posted on the village website, coldspringny.gov.

A bid for an emergency generator at the West Street pump station was awarded, after that station was flooded by Hurricane Sandy in late October. Water and Wastewater Superintendent Greg Phillips also requested that the board consider moving that station to village property on New Street, which is estimated to cost $110,000, instead of spending around $70,000 to raise all the equipment and elevate the station. He added that the water-main relining project is planned to resume when Mainlining Services Inc. returns around the end of March.

Main Street corridor improvements were also discussed at the meeting, with a presentation of a draft design report by Joe Cimino and Romulus Danciu of the engineering consulting firm CHA. The project, which would upgrade sidewalks and curbs and address handicapped accessibility as well as improve drainage and lighting, began with discussions in the summer of 2011 and is a federal transportation project with a construction cap of $755,000.