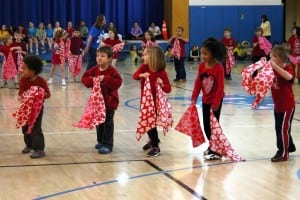 This year’s concert focused more on movement than singing. The concert opened up with all of the student performers entering the gymnasium to the “Olympic Fanfare and Theme.” The kindergarten and first grade played with a giant parachute to “Trepak” from The Nutcracker and sang to “Listen to the Beat of My Heart” while using scarves with hearts in both choreographed and free movement with the music. First graders then showed the audience a few of their warm-up exercises for P.E. with Beckley including running, jump rope, ladder drills and stretches to “Eye of the Tiger.”

Second graders performed two versions of the Mexican Hat Dance — the traditional dance and a fun disco version. They were then joined by the third graders, and the students pretended to sneak into gymnasium to “The Pink Panther Theme Song.” The children played with the parachute and an enormous ball, practiced some tumbling, and used hula-hoops before sneaking out again. The third graders closed the class performances by dancing with colorful scarves to Feist’s “1, 2, 3, 4” in a giant pinwheel motion.

“This program is a great way for students to see that such seemingly diverse subjects as music and physical education actually have many similar elements,” said Bresnan. “Leading up to the performance, students spent time learning about form, rhythm and keeping the beat. Dance and movement were the primary curriculum the last few weeks, and all of the children’s hard work paid off. This was a great night!”

The final ensemble performance included all of the K-3 students dancing together to a compilation of fun songs called “Dance Evolution” that students had practiced in both music and P.E. in the weeks leading up to the concert. The children smiled and laughed as they danced to songs such as “The Twist,” “YMCA,” “Kung Fu Fighting,” “Greased Lightning,” “I Love Rock and Roll” and “Thriller.” Bresnan proved to be a good sport by dancing along with the students. 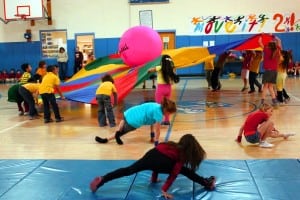 Third grader Chase Mayer shared his take on the evening. “My favorite part was ‘Dance Evolution’ because of all the creative dances we got to do,” said Chase. “It was a great activity!”

“This concert is an excellent example of integrated instruction at the Garrison School,” said Garrison School Superintendent Gloria Colucci. “Movement and music together help children develop coordination, rhythm and listening skills in an enjoyable way.”

After the concert, performers and their families moved from the gymnasium into the school foyer where they enjoyed a special art show with featured works by the K-3 students and a bake sale in support of the Garrison School PTA.