Hidden in the thousands of acres of Fahnestock Park and surrounding highlands are animals few of us see on a regular basis: bobcats, coyotes, owls, foxes. We know they’re out there, because some of us are lucky enough to hear coyotes howling at night, or we happen to glimpse a fox or bobcat dart across the road on a misty night, giving us a half-second look at their ghost-like, fleeting presence. The woods hold many secrets, and we’re all indebted to the many known and unknown heroes and heroines who worked hard and long over the past 90 years to create a large, relatively undeveloped state park here in Putnam County.

An exciting new use of photographic technology is now revealing the secretive and wary creatures that live in this large protected area and is providing us with rare images that could not have been gotten otherwise.

The photos displayed here come from a Bushnell “trail cam” set up on a frozen lake and trained on several adjacent deer carcasses, which were road kills and were then purposefully put there. Naturalists from the Taconic Outdoor Education Center arranged the camera and carcasses in early February, and the very first animals seen in daylight visiting this free meal were crows.

Two nights later, as seen in these infrared images, two coyotes, a red fox and a large bobcat showed up, and from what we can infer here, the bobcat was holding the coyotes at bay, at least for a time, while defending the large bounty of fresh deer meat. Soon thereafter, a great-horned owl was seen sitting on the carcass itself — an unusual sighting because owls are predators and are not typically known to scavenge. Bald eagles, both juveniles and adults, visit the carcass regularly, and they are often joined by crows and ravens, though the crows typically keep their distance from these larger birds. Red-tailed hawks, a raccoon and turkey vultures have also visited the deer, though as naturalist Nicole Passeri said, “Each day is a surprise, and we’re all excited to see exactly who showed up.”

The trail cam can be set to take photos every five or ten seconds (or other programmable period of time) and is controlled by a motion sensor. This creates a great challenge the next day, when Taconic’s staff members look over perhaps 2,000 images collected the night or day before, on the camera’s 8-GB memory card, as viewed on a computer.

Naturalists Passeri, John Stowell, Elijah Kruger, Greg Soyk, Victoria Londner, AJ Johnson and Mary Ronan all contributed to the camera’s operation and the time-consuming editing of the photographs. Said Stowell, “Holy cow, I never thought we would capture a photo of a bobcat on the bait, let alone one with two coyotes in the same frame!” 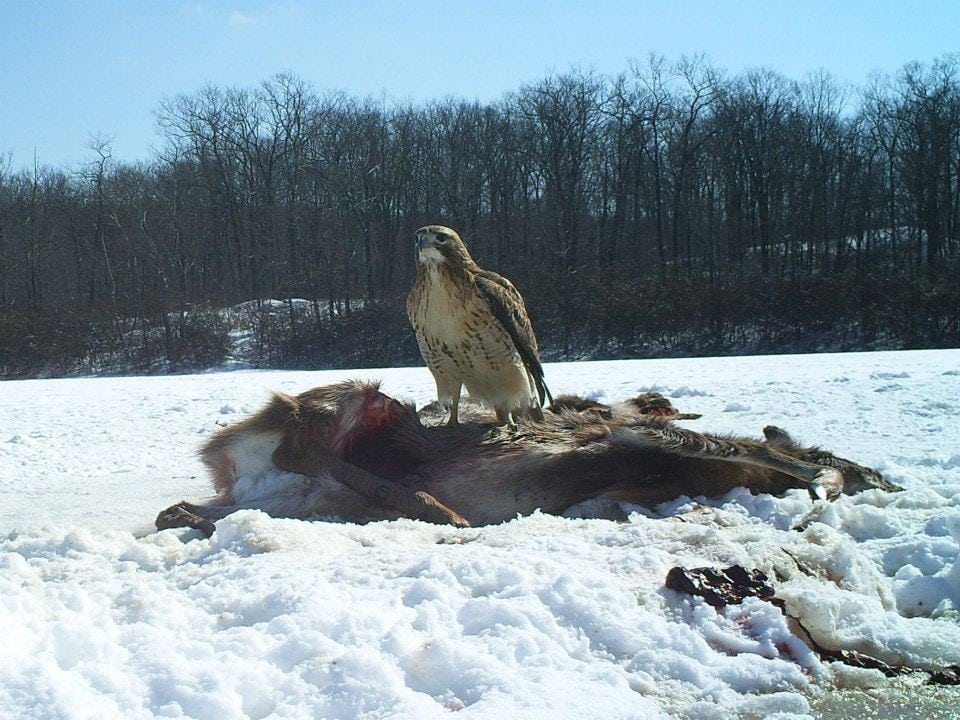 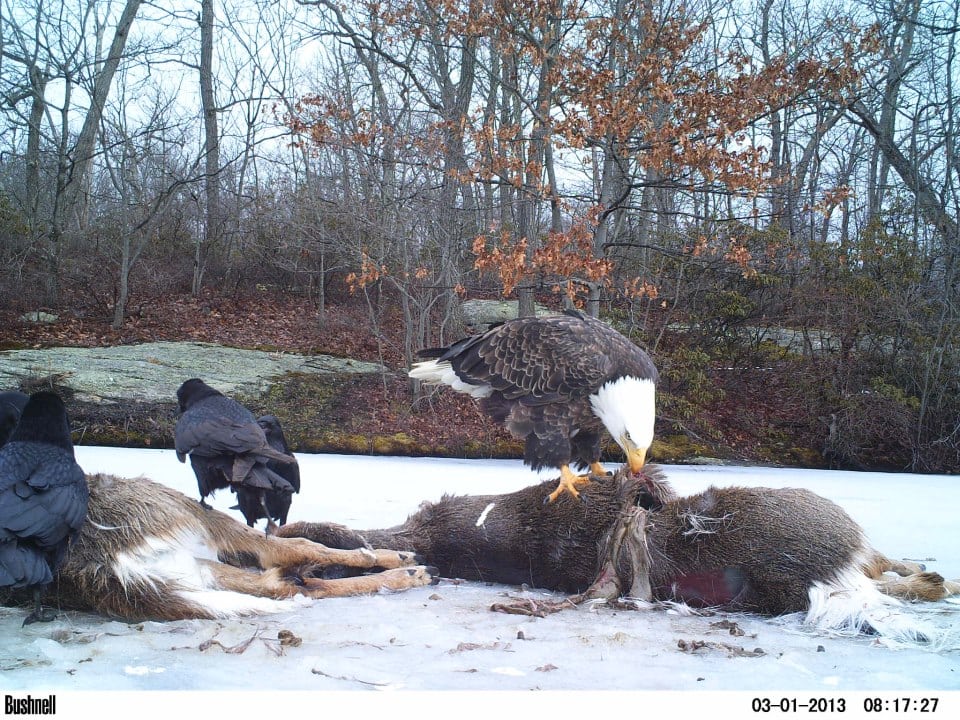 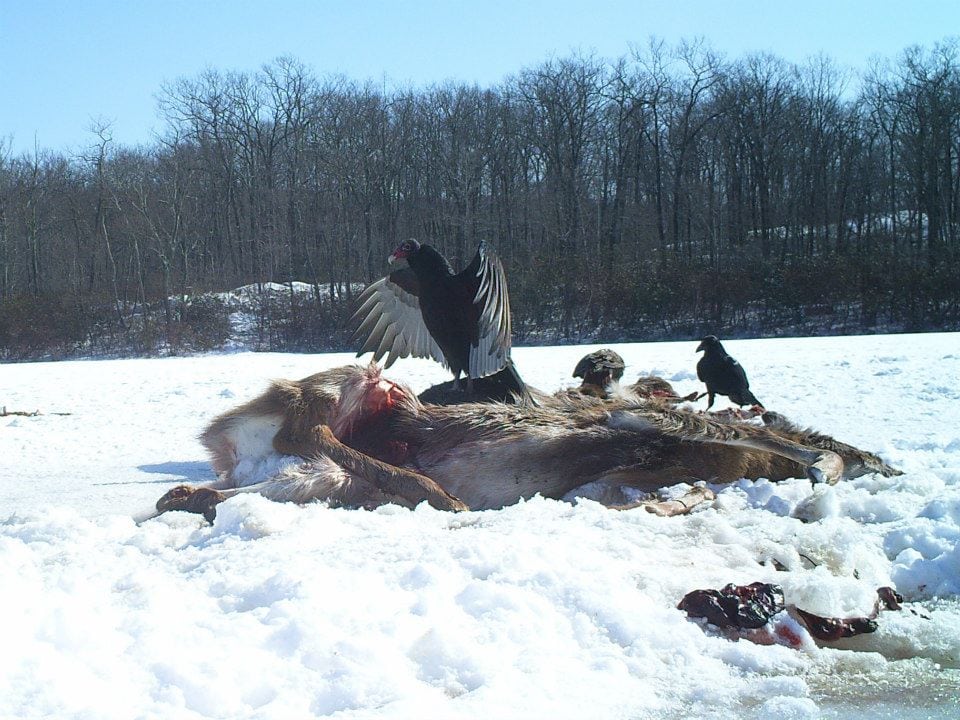 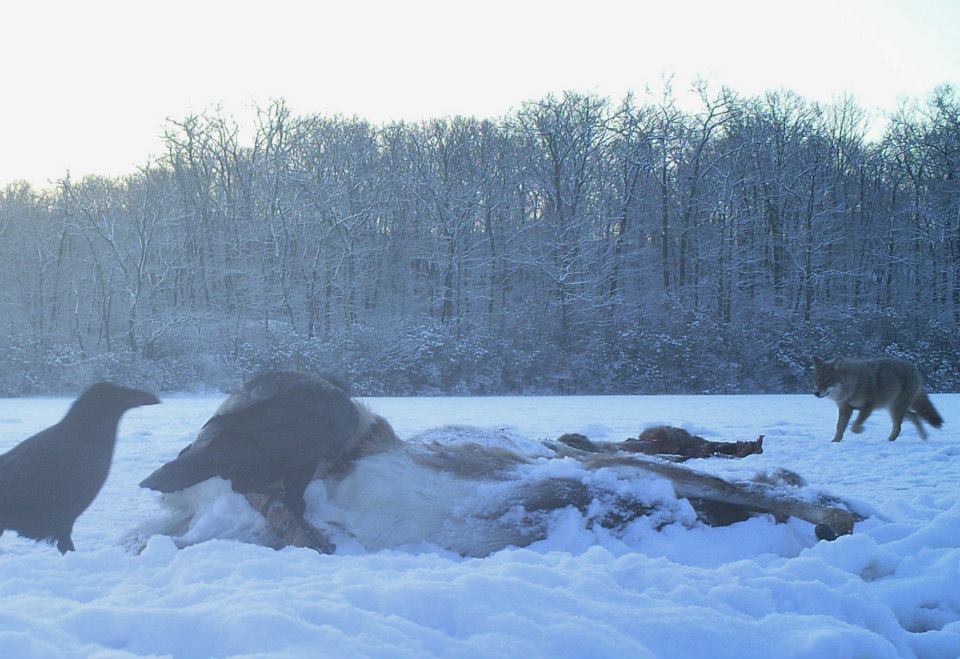 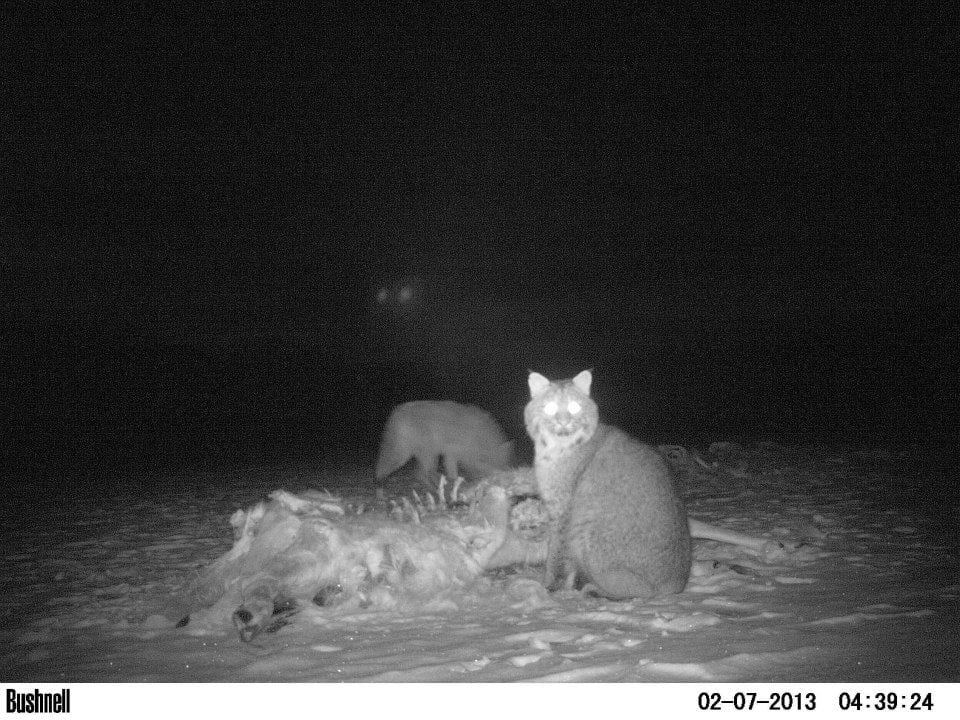 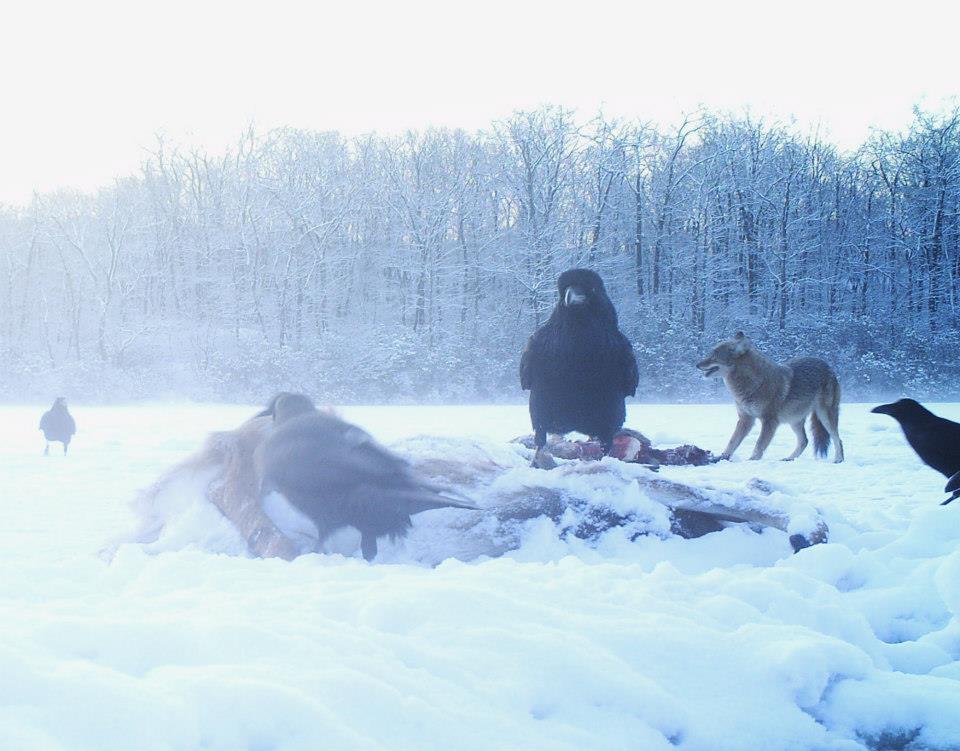 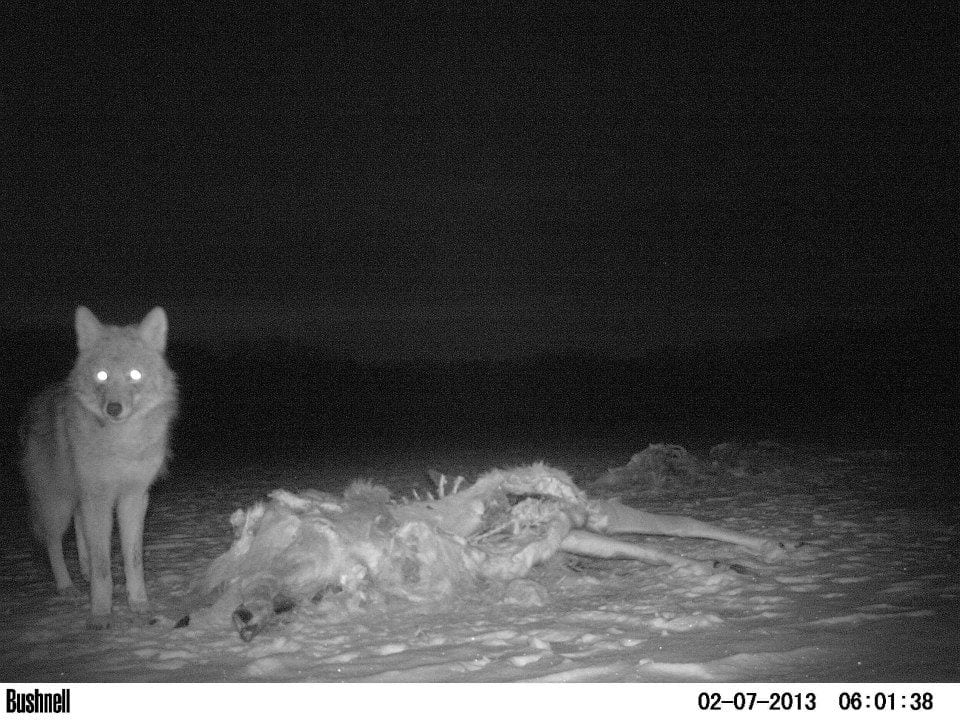 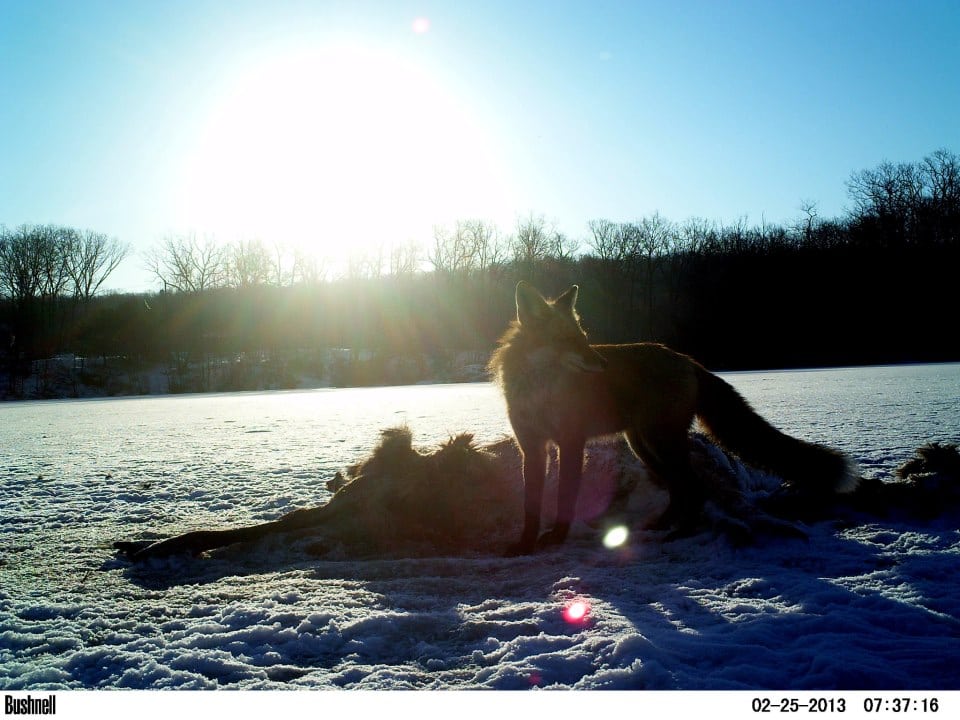 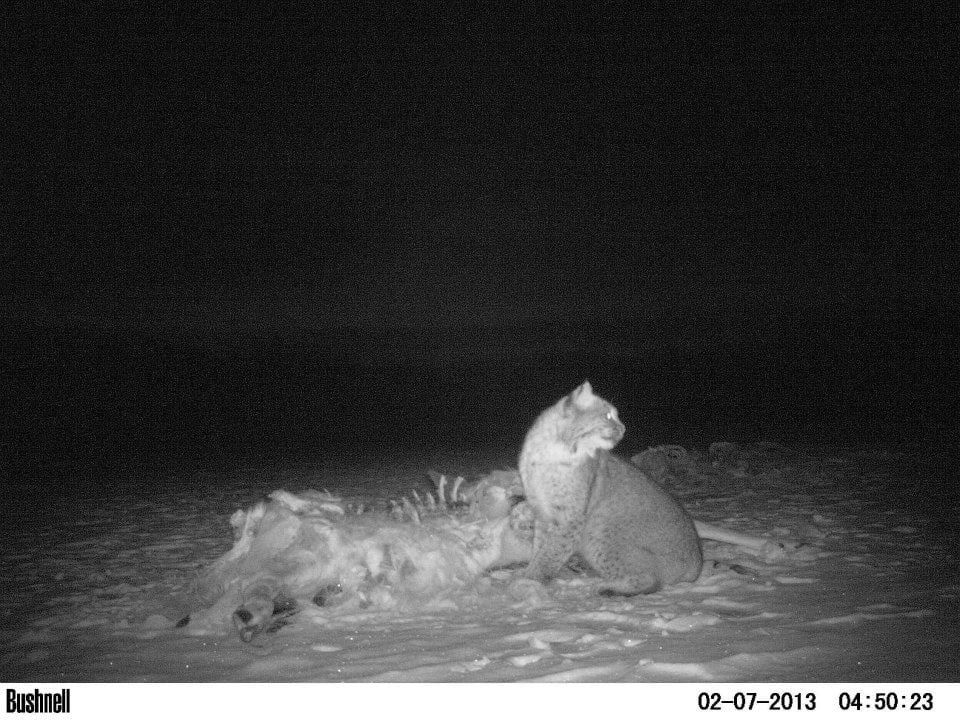 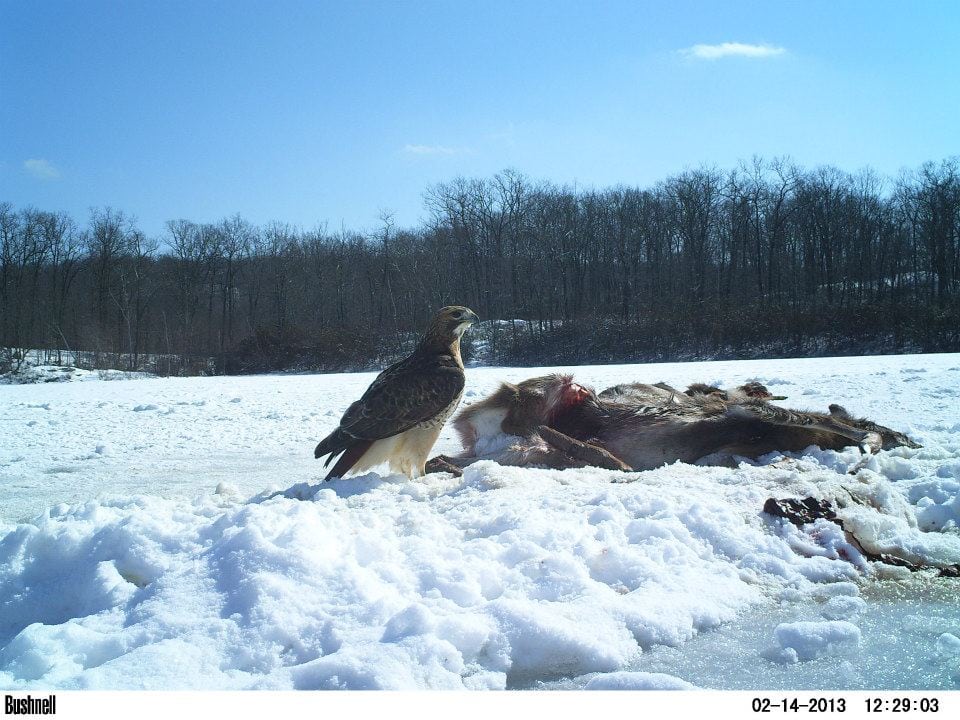