Commuters and Garrison’s Landing visitors may soon notice a new look at the historic Garrison train station: Metro-North Railroad plans to demolish the decorative canopy over the entrance to the pedestrian tunnel beneath the railroad tracks. 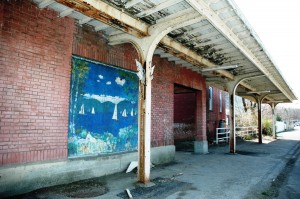 Metro-North wants to remove the old ornamental canopy on the east underpass entry at the Garrison train station. Photo by L.S. Armstrong

The news came April 4 in an announcement from Philipstown Supervisor Richard Shea at the formal Town Board monthly meeting, at which the board also heard about more dirt-road problems — this time on East Mountain Road South — and engaged in a heated debate with members of the Garrison Volunteer Fire Company. [See “Town Board, Garrison Fire Company Clash Over Firehouse Bathroom Construction”]

Shea read from a message from Terrence McCauley, manager of government and community relations for MTA Metro-North. In it, McCauley referred to “the dilapidated condition of the canopy at the underpass north of Garrison station.” Because the passenger platform now is located south of the old station, “this canopy serves little purpose for our riders and residents of Garrison,” McCauley wrote. “Also, Metro-North does not have the resources to restore the structure to its former state.”

Noting that the railroad intends to contact the New York State Historic Preservation Office [SHPO] for permission to demolish the canopy, McCauley likewise invited input from town officials. Black-and-white copies of photos he sent Shea show peeling paint and apparently rotting wood, with boards sufficiently eaten through to create a large hole in one area. Cars park in a small lot adjacent to the canopy and underpass entry.

“It’s directly across the tracks from the Depot Theatre,” Shea said of the canopy. “It does appear to be in rough shape, but these are pretty historic structures.” He said Metro-North would need a town demolition permit as well as approval from SHPO. The canopy “is all part of the original structure,” Shea observed. “I don’t know how they’re going to deal with the aesthetics of the underpass. If anyone of the public has concerns, please feel free to offer your comments to the town and we will forward them to Metro-North.”

Resident Robert Juby addressed the board about storm-water problems along East Mountain Road South, beyond Trout Brook Road, near his home. He attributed the problems to the metal grates used with culverts. When covered with debris, the grates do not admit water and so rain runoff detours around them and churns down the road, causing damage, he explained. Juby said he has personally been clearing one clogged grate and that Philipstown Highway Department crews regularly clean others, but that the enormity of the problem defies repeated efforts. Photos he showed bore witness to his words. 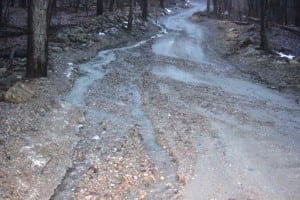 “This happens every time we have a storm,” he told the board. He blamed the type of grate used. “The culverts work. The grates don’t. It’s impossible. Those metal grates do not work on the dirt road.”

Nor do they necessarily work everywhere else, he added. He reported what he discovered after a heavy storm when he inspected a paved stretch of the road: “The same metal grates were completely blocked with leaves and nothing was working. You can see where the pavement has been eroded because the grate got covered.”

Board members asked him to send the details and copies of his photos to them and the Highway Department for follow-up.