Charles Edward Gallagher, of Cold Spring, a decorated World War II combat photographer who went on to a long career as a documentary filmmaker, died of cancer at his home Sunday, April 14. Best known as Chick Gallagher, he was 88.

Known as “Chick,” he was the personal U.S. Army photographer to Gens. Eisenhower, Patton, Bradley and Keyes in Italy. Gallagher captured the first pictures of U.S. troops entering Rome on June 4, 1944. He was later awarded the Legion of Merit, a Silver Star, two Bronze Stars, a service ribbon and a Purple Heart for his photography on the front lines.

After the war, Gallagher attended Princeton University, where he founded the Princeton Photo Service with classmate Jim Lebenthal. Gallagher earned an Associate of Arts Degree in 1949 in just two and a half years of study at Princeton. 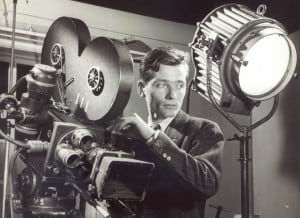 He was known for persuading celebrities to donate their voices to his films. Actors Richard Burton and Robert Preston narrated Gallagher’s film for NASA, The World Beyond Zero, about the unmanned missions leading to the Apollo space program. Gallagher’s films won him Highest Honors at the Venice Film Festival (three consecutive years) and at the Edinburgh Film Festival (two years), and Grand Prize (twice) for his work with the National Safety Council.

Gallagher also was a pioneer in experiential education. He and his wife, Stephanie Harris Gallagher, formed The Oceanics Schools in the early 1970s, to offer high school and college students a semester of work, study and travel onboard large square-rigged sailing ships in Europe, West Africa and South America.

In 1992, Gallagher filmed much of the 15,000-mile voyage of a replica Viking longship, the Gaia, as she sailed from Norway to New York and south to Rio de Janeiro, carrying messages from the world’s children to leaders attending the first Earth Summit.  The film was shown at the Earth Summit Plenary Session.

Gallagher was an avid sailor on Long Island Sound, keeping a boat in Old Greenwich, Conn., and later in New Rochelle. In the early ’90s, he revived the defunct Overseas Yacht Club, based in New York City, and served as commodore for many years. In 2002, he formed the Calf Island Community Trust to preserve the island off the coast of Greenwich as a unique maritime, estuarine, wilderness experience and community resource.

Since 1995, Gallagher served as vice president of World City America, an initiative to capture a share of the $40-billion-a-year foreign-dominated cruise industry for the American economy and workers (americanflagship.com).

Gallagher was born May 10, 1924, in Philadelphia, the only son of Irish immigrants Edward and Katherine Gallagher. He attended The Episcopal Academy for 12 years, graduating in 1942. He inflated his age to enlist in the U.S. Army shortly thereafter. Gallagher’s first marriage, to the former Margaret Ball Richardson of Greenwich, ended in divorce.

A memorial service is planned Saturday, April 27, at 3 p.m. at The Episcopal Church of St. Mary-in-the-Highlands, at the corner of Routes 9D and 301 in Cold Spring, with reception to follow.