The two constitute the Roman Catholic religious community known as the Society of the Atonement and share what their founders called the “Holy Mountain” of Graymoor. They dedicate themselves to the Franciscan life of poverty, and their work focuses on ecumenism and serving the needy — exemplified by St. Christopher’s Inn, a temporary homeless shelter and rehabilitation clinic for men.

In 1897, Lurana White, a novice Episcopal nun (later called Mother Lurana), first contacted the Episcopal priest Lewis Wattson (later known as Father Paul), trying to find a Franciscan community within the Episcopal Church. Not knowing of any, Wattson discussed with her his idea of starting a religious community devoted to reuniting the Anglican and Catholic churches. 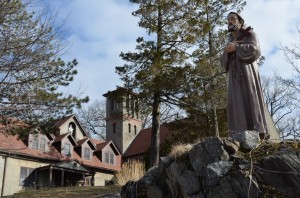 Wattson and White finally met the following year at her family’s home in Warwick, N.Y., where they decided to found the Society of the Atonement. According to Father John Keane, associate director of the Graymoor Spiritual Life Center, Wattson had been struck by the word “atonement” in St. Paul’s letter to the Romans, on receiving atonement through Christ. Seeing the word as “at-one-ment,” he concluded that the society should work toward Christian unity.

In December 1898, White traveled to Graymoor to live in a farmhouse near the abandoned chapel of St. John’s-in-the-Wilderness. Wattson arrived the following spring, taking up residence in an old shack.

Disappointed by the direction that the Episcopal Church was taking, Wattson and White decided to leave the church. In 1909, the Vatican received the Society of the Atonement into the Catholic Church.

As the area became more populated, with the building of the railroad along the Hudson River in the early 1900s, poor men began seeking shelter at Graymoor. This was the beginning of St. Christopher’s Inn, named as such because the founders took to calling the men Brothers Christopher, or Christ-bearers.

Today, St. Christopher’s Inn harbors around 140 men who come to stay for up to three months to receive health care. They are seen as guests, not clients, and often help around the grounds.

The Spiritual Life Center also hosts regular meetings and retreats for Alcoholics Anonymous, Overeaters Anonymous and other recovery groups. Keane emphasized the work of Graymoor as part of “at-one-ment” in the sense of correcting an addiction to drugs. The other part of “making one” is correcting what Keane called “our addiction to disunity.”

In 1908 Wattson started the Octave (now Week) of Prayer for Christian Unity, which takes place January 18-25. This year, several area church leaders participated in the Graymoor Ecumenical and Interreligious Institute’s Week of Prayer, including Rev. Leslie Mott of the First Presbyterian Church of Cold Spring and Rev. Margaret Laemmel of the United Methodist Church of Cold Spring and South Highland. 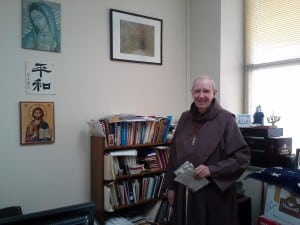 The Spiritual Life Center also hosts interreligious activities, such as the Saturday Buddhism classes taught by Maeve Eng-Wong and an interfaith New Year’s prayer service at the Chuang Yen Buddhist Monastery in Carmel.

It makes sense that Keane is a director of the center; he lived in Japan for 18 years, ministering to parishes in Kawasaki, Yokohama and Tajimi, and is currently finishing up a forthcoming book based on his research, The Japanese Quest for Divinity: Cultural and Theological Implications.

Discussing the differences between Japanese and Judeo-Christian views, Keane said that appreciating others’ quests for divinity allows one’s faith to grow deeper, leading to tolerance and dialogue instead of conflict. He described culture as an “envelope that encloses a group of people” and that shapes their worldview, and they “all have something to add to understanding the human person.”

“There’s nothing wrong with differences,” he said, and often a particular tradition simply “fits the personality” of a person.

The sisters as well as the friars are involved in hospital and prison ministries, and there are now Franciscan Friars and Sisters of the Atonement in other locations in the U.S., Canada, Italy, Brazil and Japan.

On a tour of the sisters’ original building, Sister Eilish Sweeney pointed out artifacts demonstrating their work throughout the years. Some of the photos, for instance, showed sisters who had accompanied Japanese Americans into internment camps during World War II. (Tours of the Heritage House, where a small museum is now housed, can be arranged with the sisters.) 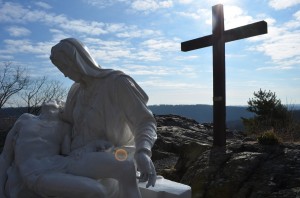 The pieta at Father Paul Wattson’s tomb on Graymoor

About 20 years ago, the sisters founded the Mother Lurana Senior Day Center at the Mother Lurana House. With the Putnam County Office for the Aging, the center provides lunch to seniors on Tuesdays and Thursdays, 10 a.m. – 2 p.m. Many of the seniors there are in the Hotsy Totsy Follies, a song-and-dance group that performs at Graymoor and elsewhere in the area, including senior centers.

The sisters also engage in advocacy, especially on social justice issues such as poverty, homelessness and human trafficking. Justice, Peace and Integrity of Creation Coordinator Sister Margaret Sikora said some of the sisters recently participated in a 40-hour fast for raising the minimum wage. In March, she and a few others attended a vigil at Indian Point, which was a stop on the Peace Walk for a Nuclear-Free Future to Washington, D.C.

Sikora noted fracking as another safety and environmental concern, commending the Putnam County Legislature for banning the use of fracking wastewater on county roads but urging Philipstown to follow suit to protect town roads as well.

Though the friars have parishes elsewhere in the U.S. and Canada, Graymoor itself is not a parish. It does, however, boast regular services and programs that are open to the public. Friars celebrate Mass daily in the sisters’ chapel: Monday-Friday at 11:15 a.m., Saturday at 4:30 p.m., and Sunday at 9 a.m. A large Sunday Mass is celebrated at the friars’ Pilgrim Hall at 11 a.m. as well as a smaller one in the sisters’ St. John’s Church, at 10 a.m.

Graymoor provides spaces for contemplation on its grounds, too. Our Lady of Loretto parishioner Diana Roda called the friars’ St. Francis Chapel a particularly holy place, with its altar from the spot in Italy where St. Francis received the stigmata.

Frances Galati, of Continental Village, said of Graymoor, “It’s a wonderful place to get involved in — holy, secure and calm.” She has been going to Mass at Graymoor for 30 years and helps the sisters with their shopping and transportation. Galati urges people to help with the work that they do by making monetary donations or simply by donating items to their thrift shop.

Upcoming events include a benefit concert for the sisters, featuring Irish musician John Wheland and his band at Peekskill’s Paramount Center on May 26, and the Sunday before the feast of St. Anthony (June 13), when a large number of Haitian pilgrims arrive at Graymoor’s Shrine of St. Anthony.