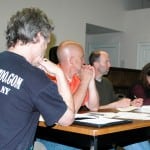 The Town Board works through its agenda; from left: Councilors Dave Merandy (back to camera) and John Van Tassel, Supervisor Richard Shea, Councilors Nancy Montgomery and Betty Budney.  Photo by L.S. Armstrong

Philipstown’s Town Board this week continued to wrestle with the dilemma of its relations with fire departments. A letter from the Garrison Volunteer Fire Company (GVFC) triggered the latest deliberations, at the board’s April 24 workshop.

In the message, the GVFC apologized for neglecting to inform the board of its intention to purchase a new, replacement truck for the fire chief’s use. Board members questioned both the need for the truck and its source of funding, and noted it comes atop another controversial GVFC project, constructing a fifth bathroom in the Route 9 firehouse.

Supervisor Richard Shea said that he doubted the truck had been bought yet and had advised the GVFC not to proceed with the purchase, given the unresolved issues between the fire company and town government. “I have a problem with the three trucks — three chief’s trucks,” he said. “Every other fire department has got one. They’ve got three,” each costing about $48,500.

Councilor Dave Merandy sounded a note of disbelief about the latest development. In light of the board’s concerns about the bathroom project, “they know where we stand on them spending money that hasn’t gone through us,” he said. “And then they’re just informing us that they’re buying a truck, with no information on it.”

Van Tassel said money for the truck was not listed in the GVFC’s 2013 budget. “Any expenditure over $5,000 that’s not itemized in their budget needs approval by the supervisor,” he said. “I’ve no idea where this money is coming from.”

And that, Shea remarked, “is the crux of the issue.” When combined with the bathroom project, a chief’s truck means “you’re talking about $70,000 in unexplained purchases. That deserves a look.”

He also sounded exasperated upon learning that the North Highlands Fire District/Department wanted to charge the town $250 per monthly meeting for town Planning Board use of a firehouse room.

Councilor Nancy Montgomery said the amount is more than the Marriott Hotel charges for a meeting room — and the hotel provides setup and other aid as part of the arrangement, while the NHFD does not.

“This just points to that whole turf thing” with some fire department personnel, Shea said. “It’s outrageous. Here you have this community-supported building that should be able to be used by a government agency,” but is not made available without a hefty fee.

Board members proposed separate meetings with the Garrison and North Highlands fire departments to go over matters involving each, but set no dates. They likewise plan a public meeting with an expert in firefighting and fire department-related law, to — as Shea put it — “get this ironed out once and for all as to the legal standing of the town and the oversight capacity in regard to the Garrison fire department.”

“I’d just like to clarify our role and responsibility with them,” said Van Tassel, who is arranging the session.

One thought on “Town Board Again Focuses on Fire Company Issues”