The 180-acre parcel of land constituting what is now known as the Garrison School Forest was deeded to the school by Frederick Osborn, with the stipulation that it be used for educational purposes and for the enjoyment of the community. The entire school community double-dipped on the educational and enjoyment in last Friday’s (May 3) School Forest Day, where “the kids are having so much fun that they don’t even notice that they’re learning.” Eight activity stations dotted the paths and trails once carved out by Osborn, some of them planned so that those walking would enjoy magnificent views of the Hudson. The kindergartners head excitedly to their next activity.

This is the fifth year of School Forest Day, wherein most of the school, students and teachers alike, heads off into the woods. According to the information packet provided to parents, the Garrison School Forest includes the summit and slopes of Fort Hill and the steep ridges running east almost to Route 9. Fort Hill overlooks the Hudson directly opposite West Point and forms the center of the eastern rampart of the Hudson Highlands. It derives its name from the old fort at its summit, called South Redoubt, which was visited by George Washington on the morning he was advised of Benedict Arnold’s treason.

The students, divided into four grade divisions, arrived at staggered times on a made-to-order weather spectacular. The theme for the day was “SLOW (SunLight, Oxygen, Water) Down, Take a Breath,” described as “an extension of the symbiotic nature of all living things and a reminder to observe and respect the planet that sustains us.”

Throughout the day they participated in two to three activities per division, all designed to enhance the students’ sense of place — that place being the ecosystem of the Hudson Highlands.

The youngest children, those in kindergarten through second grade, spent the morning rotating among three activities — fairy houses, sensory and stream — before returning to the school for lunch. Three fairy houses magically appeared in the woods; at each, “fairy ambassadors” guided the children in different ways. One noted in response to the question, “Are you a real fairy?” that “I’m a real person speaking on behalf of the fairies.”

That fairy assistant helped the children construct small and large fairy house structures out of branches and other natural materials found nearby. Another held an outdoor fairy stretching warm-up class, utilizing natural imagery: “Stretch,” she instructed, “lean back and be the waterfall; stretch your fairy wings. Imagine you are a tree in the forest, roots deep in the ground, and balance.” 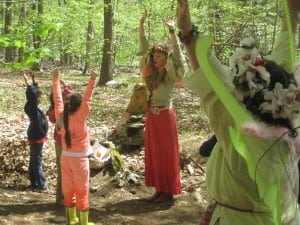 A woodland fairy tells the children to ’be a waterfall.’

At the sensory station, the emphasis was on experiencing the forest through differentiated senses. Directing the children to smell a blade of grass and feel the bark of a tree, the facilitator then held up a blue-tinged piece of bark, explaining that “when this kind of wood dies a kind of mushroom — blue-staining fungus — comes out.”

After the talk, the children were sent on a shapes-and-textures scavenger hunt, with the first instruction to find something fuzzy. Meanwhile, there was lots of action at the stream, with mesh paddles being used to scoop out some of the denizens of the water — dragonfly larvae generating great adulation.

Third- and fourth-graders divided their time among forest ranger visits, shelter building, natural sculpture design, and a compass/scavenger hunt, with some of these activities enjoyed by the fifth- and sixth-graders as well. These older grades also participated in a survival skills workshop, led by Shane Hobel, as well as a team-building ropes competition. Ropes were criss-crossed and strung diagonally amidst a grove of trees, and the students, divided into two teams, had to figure out ways through, navigating while making as few rope touches as possible.

Grades six through eight also took part in an orienteering challenge, new this year. Three separate courses were set up, each having about 10 control points, which the students, grouped into small teams, had to navigate, solely utilizing written directions and a compass. At each control point, they had to unearth a “cache” that contained a riddle, which they had to solve. Progressing through the course, in which they covered a good deal of terrain, some on trail, some off, they had to take bearings, count paces and work collectively. Participants were urged to “confer with each other as to what your readings are, then take an average.”

One group began with several missteps, then regrouped, started working more cooperatively, and was much more successful from that point onwards. Spanish teacher Idalia D’Antuono accompanied that group. She has come to several School Forest Days now and called it “very well planned, by both parents and teachers.” She noted that although many of the activities remain the same through the years, by virtue of changing grades, the children are exposed to new ones with each successive visit. 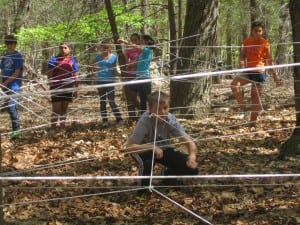 Outdoor educator Pete Salmansohn, a Forest Committee member, recalled the beginnings of Forest Day, which he said began grassroots, with “a group of Garrison moms sitting around the kitchen table, wishing for more outdoor learning, relating to ecology, sustainability at the school.”

These meetings led to a proposal written that resulted in a $45,000 grant secured from a local donor, who wished to remain anonymous. This grant, distributed as $20,000 the first year, $15,000 the second and $10,000 the third, enabled the school to take much greater advantage of the parcel of land, using it for outdoor learning and to create related educational activities at the school itself.

“Forest day is an outgrowth of that,” said Salmansohn. “The first year every class visited once a year, separately. Then it was decided to get the whole school here to celebrate as an entire body.”

The Forest Day committee, which includes Principal Stephanie Impellitiere, plans it all out. To complement the day, there is an assembly the day prior — this year’s featured storyteller Jonathan Kruk told the history of the forest — and each grade has specific post-Forest Day follow-up activities as well. A Herculean effort providing lumber for the fairy house. 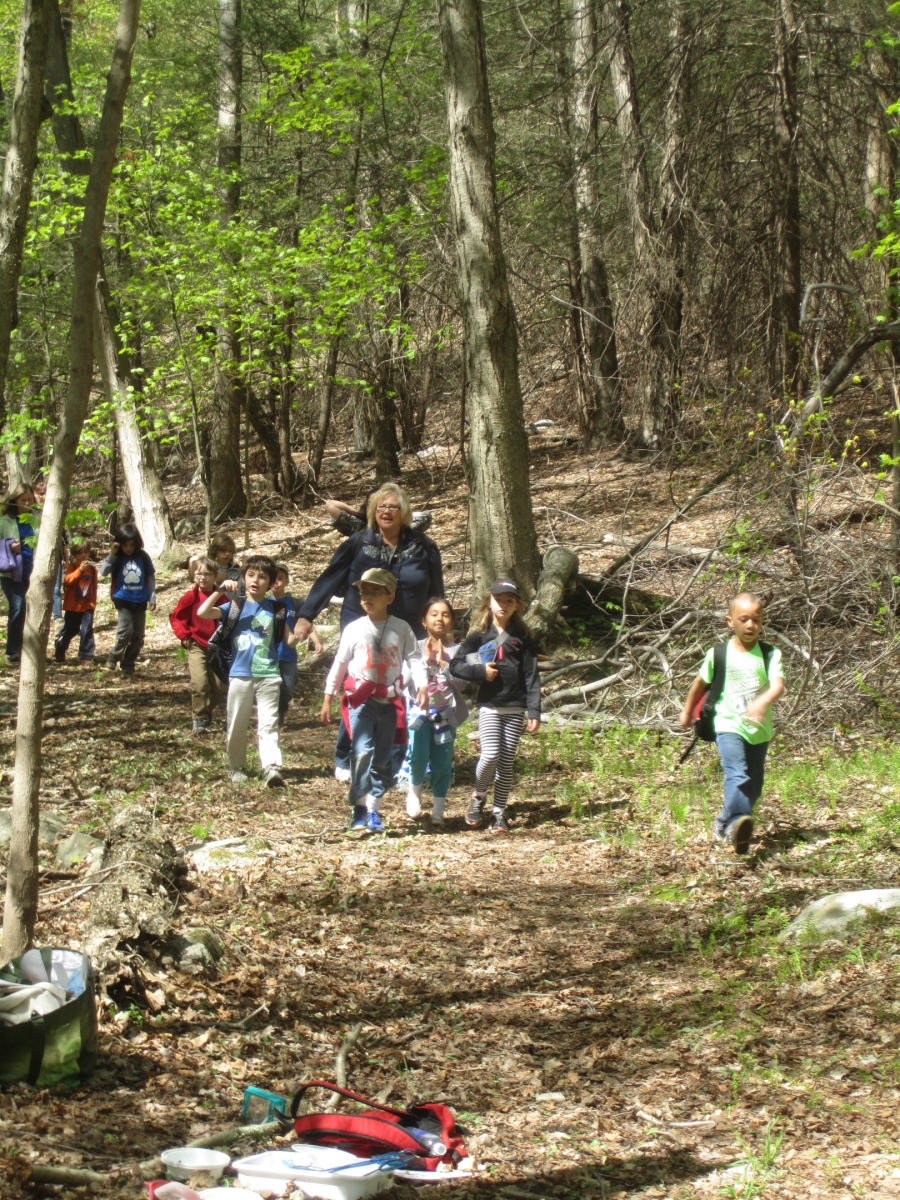 The kindergartners head excitedly to their next activity. A group of seventh-graders heads off for orienteering. 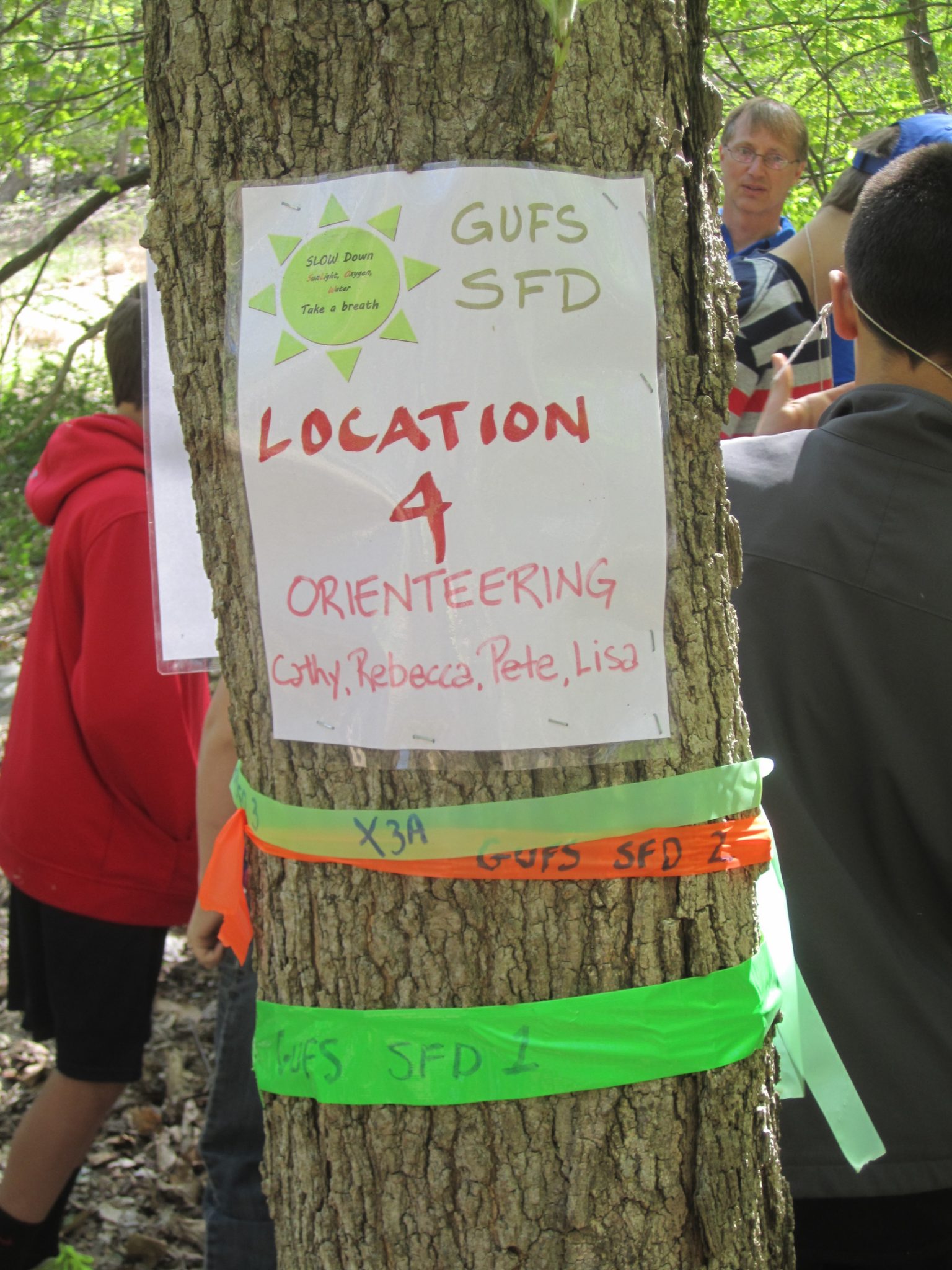 One of eight different activity centers in the Garrison School Forest. 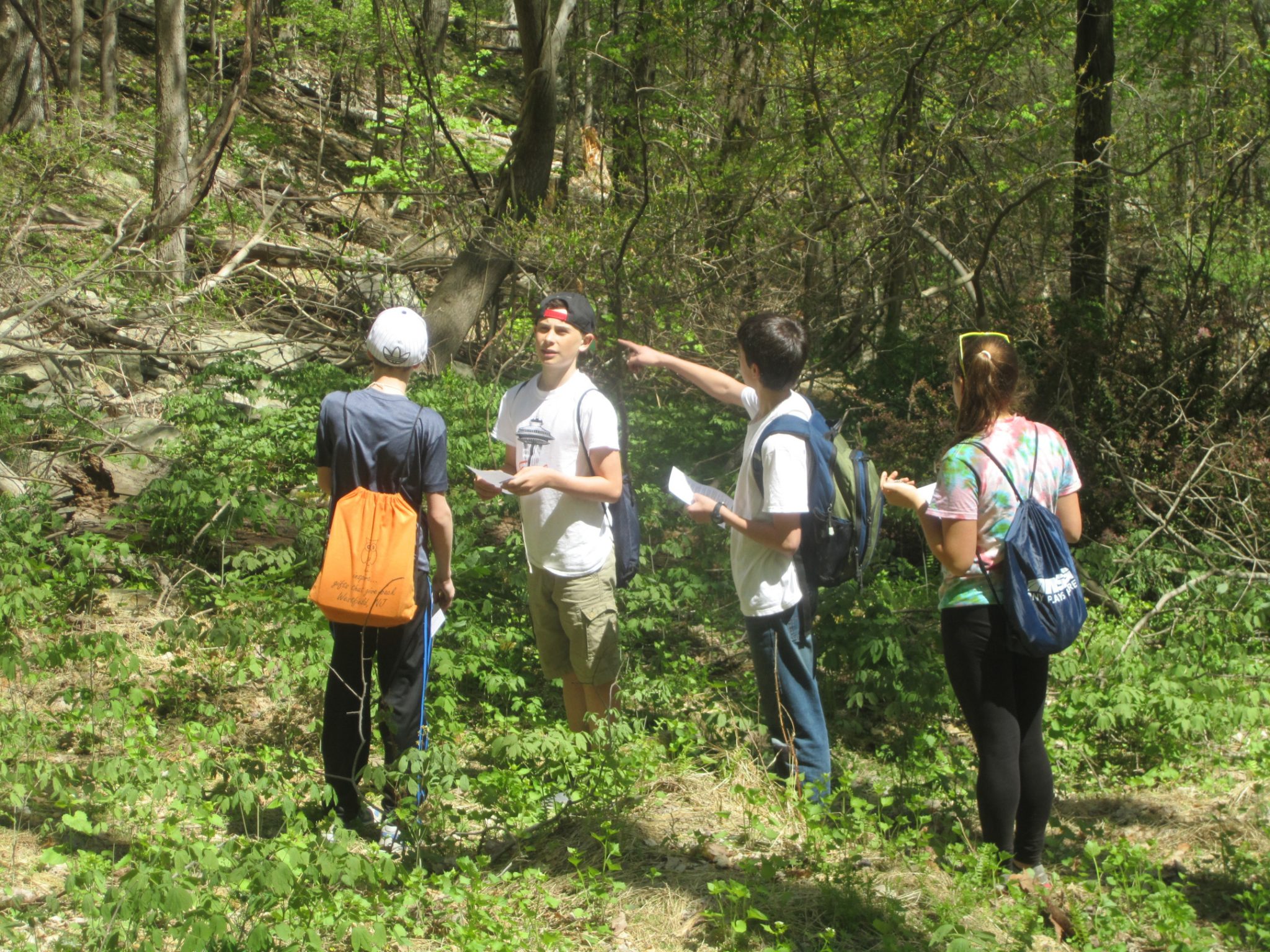 Seventh-graders figure it out together with a compass and paces. 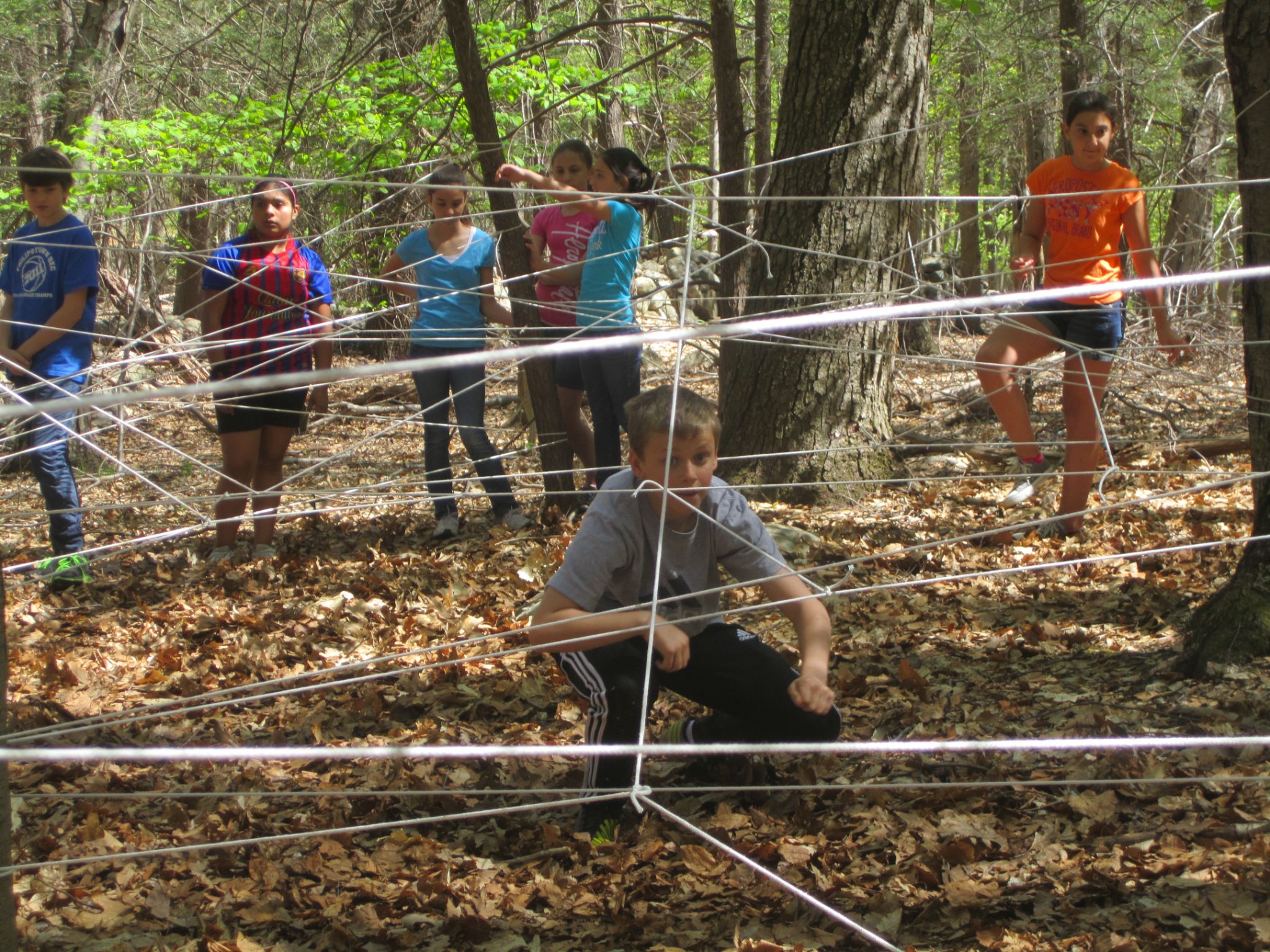 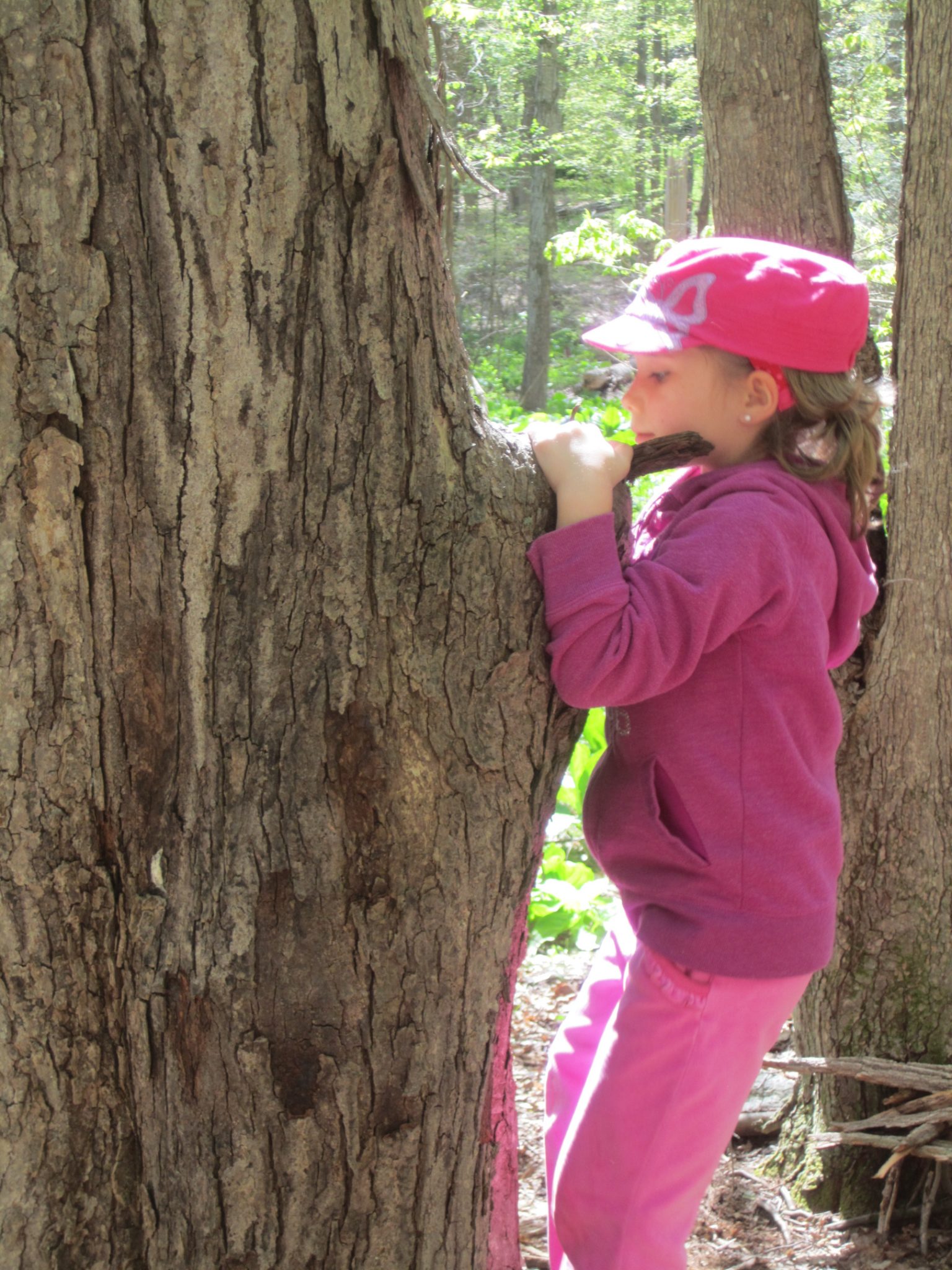 Peering into the mystery of a fairy tree. 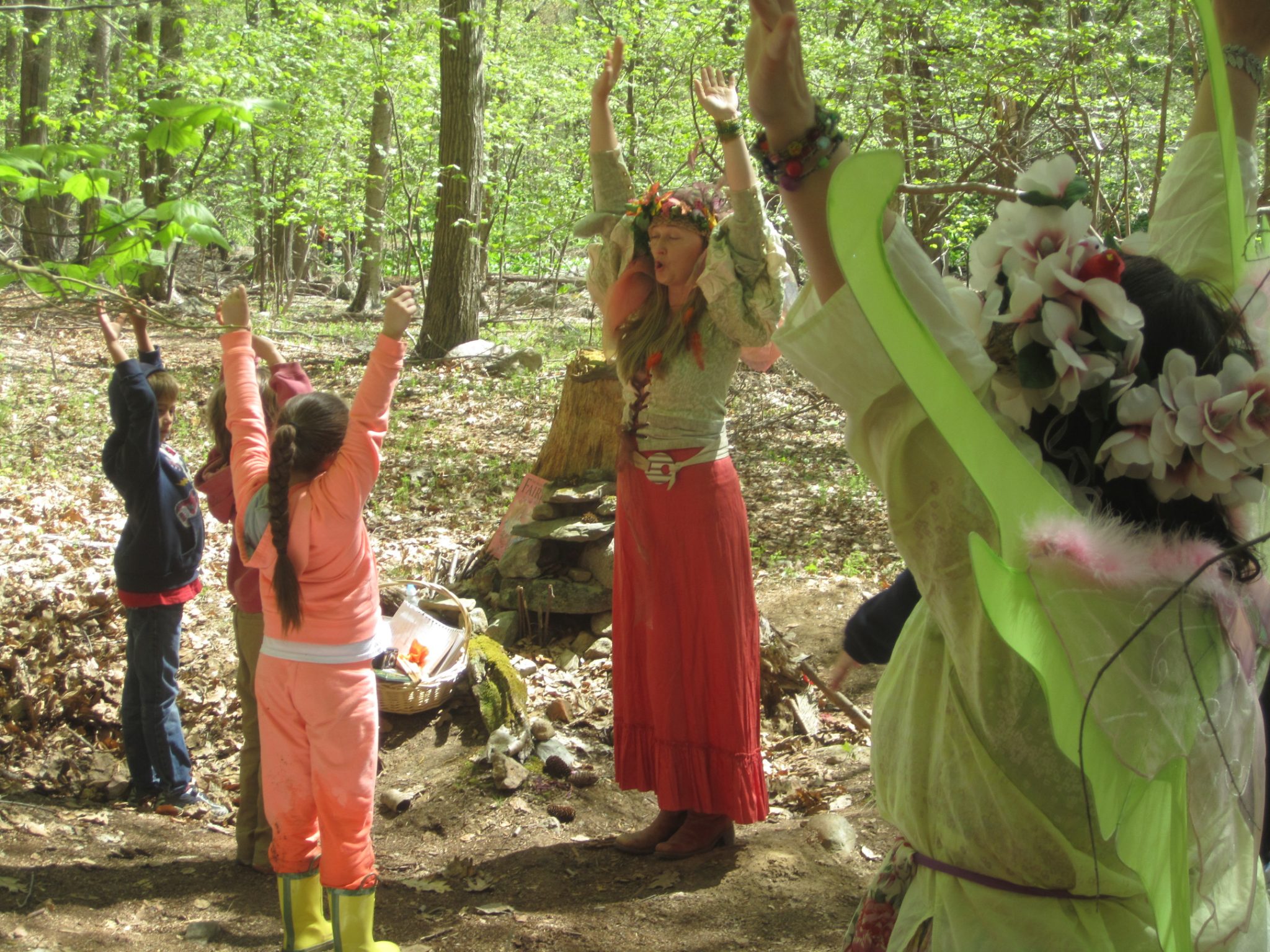 A woodland fairy tells the children to 'be a waterfall.' 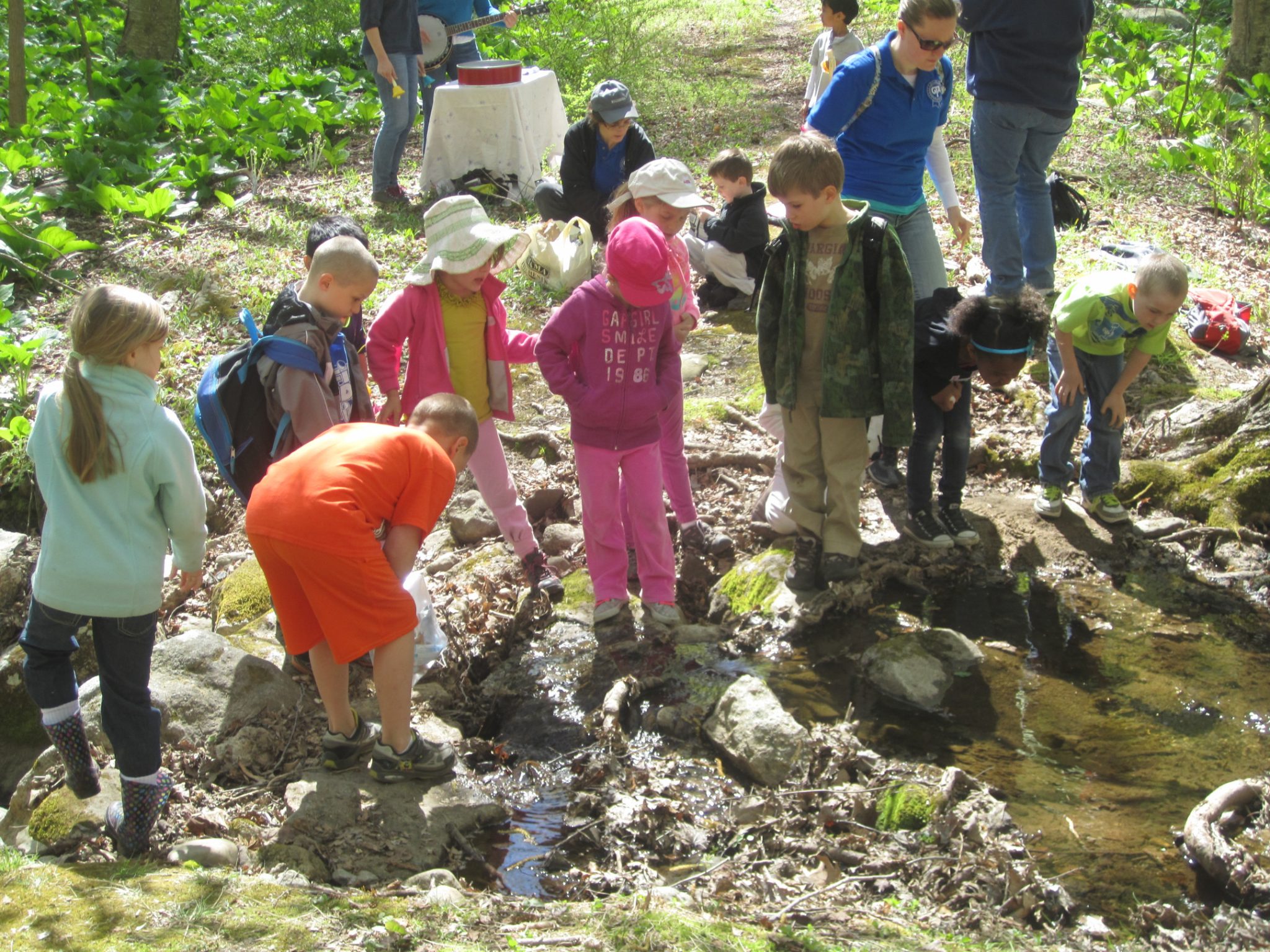 So much to find in the stream.