My mother thinks I should grow rhubarb.

She’s right, of course. I should.

But every spring, when she asks me why I haven’t tucked a few rhubarb crowns into some quiet little corner of the garden where they would practically look after themselves (they are that easy), I glance out the windows and sigh. There’s so much to do out there. Planting rhubarb never seems to make it to the top of the list.

It should, of course. She’s right.

After all, I am always thrilled when the first crop of it arrives at the greenmarket, long before any other local fruits make an appearance. I buy far too much and make pie and compote, and the next couple of weeks, when I buy far too much more of it, I don’t know what else to do, so I make more pie and more compote, and after that I’m pretty much done with rhubarb for the year.

Maybe if I grew my own, my behavior toward it would be more circumspect. Maybe I would go back to experimenting with it, as I used to do: roasting or pickling a couple of stalks at a time, or cooking them up into a nice, spicy chutney. Maybe I would even add them to savory stews of pork or lamb with spinach or parsnips, something I always meant to do before I had kids. 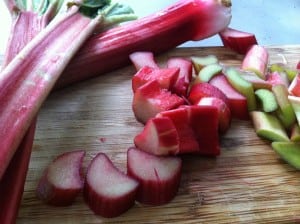 The combination sounds strange, I realize, but keep in mind that, botanically speaking, rhubarb is a vegetable, not a fruit — and its first culinary use was in savory dishes from Middle Eastern kitchens, where sweet and spicy ingredients often mixed it up with meats and vegetables. (For millennia before that, rhubarb didn’t appear in kitchens at all but rather in apothecaries, where it was treasured for its medicinal qualities. It is a laxative. Recently, it has also been found to fight cancer.)

Yet truth be told, I’ve grown skeptical of rhubarb’s culinary versatility. Its flavor is both fragile and strangely particular, and I’ve found that only simple recipes let it shine. I suspect chefs know this, though most pretend not to. If you dine out in New York City in springtime, you will encounter all kinds of rhubarb preparations on their menus. Most don’t make much sense. Like the rhubarb relish that showed up on my dinner plate at a restaurant one night, alongside a grilled quail. It blushed prettily on the plate, but its flavor was just humming a little tune all to itself, quite out of harmony with the rest of the dish.

Another night, a rhubarb cocktail was equally mystifying: it tasted completely of orange, rosemary and tequila; the rhubarb, apart from lending its good name to the concoction, did not seem to put in an appearance at all. 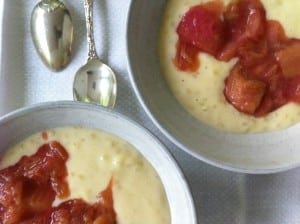 I want rhubarb to taste of itself. Thanks to my mother’s lifelong rhubarb advocacy, it’s a taste I know well. My earliest food memory is of sitting outside on our kitchen stoop with a small dish of sugar in my lap and a just-cut stalk of raw rhubarb in my hand. I would dip one end of the fruit into the snowy white pile, then nibble off an exhilarating bite. I was no more than 3 or 4 when I first ate rhubarb this way, and the sourness of the fruit playing leapfrog on my tongue with the sweetness of the sugar was quite thrilling to me.

These days, in search of lesser thrills, I’ve played around with flavorings for my compote. Vanilla is nice if there will be strawberries in the mix, as is almond extract. But if I’m using rhubarb alone, then a little cardamom, black pepper, or star anise can add an enticing hint of something exotic—a taste that could never possibly, no matter what, come from my own back yard.

Warm compote is delicious with vanilla ice cream. But this year, craving nursery food, I made tapioca pudding instead (following the package instructions on Bob’s Red Mill tapioca). In place of the spices in the compote, you can use two ½-inch-thick slices of ginger and a wide piece of orange peel, and add almond extract to the pudding, instead of the vanilla.

Wash the rhubarb well and cut off the root end and any leafy parts. Slice into ½-inch pieces. Put the rhubarb and all the remaining ingredients in a small pot with a tight-fitting lid. Place over medium heat, watching closely until it begins to simmer; reduce heat and cook 8-10 minutes, or until the fruit is soft (it will continue to dissolve off the heat). Stir in the strawberries. Serve warm or cool.