Although it sounds like a top-secret hush-hush endeavor to be spoken of only in furtive whispers, Project Code Spring (PCS) is, in fact, a new program, generated by members of the Philipstown Tech Group, that aims to teach local kids to read and write computer code and work with raw materials in creative ways rather than through installed programs.

For those not in the know, code is, in a simplistic explanation, the commands that make computer programs perform specific tasks; by writing code the writer is directing the computer to do any of the things it can do, from the operation of websites to video games and beyond. After a beta testing period, PCS is now officially up and running each Saturday afternoon at 4 p.m. at the Desmond-Fish Library, on a drop-in, club-like basis. The Philipstown Tech Group was formed to pull together local IT professionals into an informal hub in which to share ideas, and this is one such idea now coming to fruition. 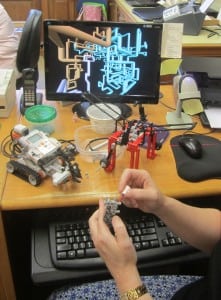 Preparing robots for use by the Project Code Spring contingent (Photo by A. Rooney)

According to Desmond-Fish Library cybrarian Pam McCluskey, who is facilitating the program, Tech Group’s Kevin Gaugler was particularly inspired by a video he watched on code.org on the need for coding in schools. (The video is viewable on the PCS homepage, codespringers.org.) The video featured the A-list of the IT industry: Steve Jobs, Bill Gates, Mark Zuckerberg, etc., who all spoke of when they began coding.

Without early experience in creating things on their own, future members of the job force may be at a disadvantage. With nearly all industries now employing computers, many jobs are going unfilled because of the lack of expertise in coding. McCluskey said, “As a library, we’re champions of literacy, and reading and writing code is now part of that literacy.”

The stated goals of PCS are “to create a framework of best practices for communities to support technological literacy, foster creativity and innovation and instill a lifelong passion for tinkering, creating and hacking. We want to make it easy for parents, teachers and interested tech-savvy citizens to make experiences for kids that put them on a path of discovery, enjoyment and imagination around technology.”

Designed for children who have reasonable reading skills through about age 14, PCS is being developed with feedback from Haldane and Garrison Schools, both of which have computer science classes but acknowledge that enhancements are needed. Haldane Superintendent Mark Villanti has dubbed PCS “Montessori meets the digital age.”

Participants, who are free to drop in on any session and need not make a broad commitment to it, work in groups of four on a variety of projects. These include programmable Lego Mindstorm robots, which the kids can use on obstacle courses, hooking up the robot to a laptop and giving it a series of commands to get it to maneuver correctly, and by doing so, turning into computer programmers in a fun way.

Then there’s Raspberry Pi, which McCluskey described as “like a small computer, with a single motherboard. Kids take it and format the card, turning into a hard drive and basically creating their own computer.” The credit card-sized computer has been created for the express purpose of becoming a teaching tool for kids learning programming. Some have been donated, and the library is hoping for enough donations to bring their stock up to about 10, so that kids can actually check them out and continue to work on them at home during the week.

They also use Scratch, a programming language and online community designed by the Massachusetts Institute of Technology Media Lab, where users can create their own interactive stories, games and animations. McCluskey comes up with challenges for them, along the lines of “Try to make your cat dance,” essentially asking them to determine what command will make the object respond in the requested way.

Thus far, the sessions have attracted as many as 14 children and have included many girls. Asked if any child could be taught to write code, McCluskey said: “Some grab onto it more than others, like any activity or talent. That’s why we have a variety of projects going on at once. Some kids are born to do this, and because it’s a library program, it’s free and you can try different things, float between projects. Above all, it’s a club, not a class.”

PCS also welcomes teenagers who already have some expertise in coding but are experiencing issues or problems with anything they might be creating, including video projects.

The sessions take place at 4 p.m. on Saturdays, both in the summer and continuing on in the fall. Signing up in advance through the website is mandatory, but no long-term commitment is required. Those attending enter through the back door, as the library is officially closed by then. Parents are welcome but serve as mentors only — the kids have to figure things out themselves. McCluskey does ask that all parents both deliver their children to the Program Room themselves and, most importantly, pick them up in person, downstairs, and do not wait in the car for their children to emerge. This makes for a more secure dismissal arrangement.

Those in the community with IT knowledge are also invited to stop by and share.

The program is actively seeking donations, “those things that may well be sitting in your closet,” said McCluskey; the most-needed equipment are USB keyboards, USB mice (must be USB, “not the round ones”), any flat-screen monitors, and Lego bricks. They’ve received donations of Mindstorm robots from Jim Young and from George and Emily Lansbury, and the Cold Spring Lions Club just donated six much-needed adaptors, enabling crucial connections to monitors. “The way this program is starting to grow already, I can see a steady need for these things,” said McCluskey.

For more information, and to sign up, visit codespringers.org.

One thought on “Secret’s Out: Project Code Spring Teaches Kids How to Write Programs”