Group to meet on emergency preparedness

The Cold Spring Village Board of Trustees anticipated a charged meeting Tuesday night (June 4) at their workshop on emergency preparedness for flood events, most likely due to the contentious nature of comments last fall after Hurricane Sandy and at recent meetings about the village’s response to major flooding that occurred in lower Cold Spring during Hurricanes Irene and Sandy. While the many residents who attended the meeting did express some frustration, their remarks remained civil and constructive, resulting in the formation of a task force consisting of residents as well as Trustee Stephanie Hawkins and Mayor Ralph Falloon, who works as an emergency services coordinator for the county. 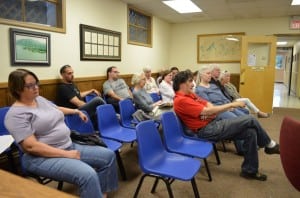 Criticisms were still leveled at the village government for the lack of response to flooding. Falloon replied that previously the village has not offered much in the way of disaster preparation or response and that the workshop’s purpose was to find out residents’ expectations for future events.

Fish Street residents Karn and John Dunn said their house was flooded for the first time in about 30 years by Sandy, and Karn Dunn began public comment by explaining, “There are weaknesses that show up in any disaster, no matter how good the plan is.” She pointed out areas for improvement in the future, such as an evacuation plan and a frequently updated banner on the village website with alerts on storms and snow ordinances, and brought up the idea of forming a task force.

According to Karn Dunn, whenever there is a large event drawing people to the waterfront, such as a flood, the normally one-way streets become dangerously two-way. She suggested putting up cones and extra signage warning that the streets are either one- or two-way and trying it out during the upcoming Fourth of July celebration.

Several of the residents spoke about controlling or prohibiting the “gawking” that occurred during and after the storm, not only because of traffic safety. Resident Jean-Pierre Seibel of Main Street described people wading in the floodwaters while smoking, unaware that a fuel-oil tank at the now-demolished Quonset hut by Dockside Park had spilled its contents into the water. “That made me very concerned,” he said.

Besides safety, some complained that residents of the upper village seemed not to care about those below the tracks. Nina Pidala said people asked “stupid questions” but that not one of them offered to help her with cleanup. Karn Dunn said, however, that some people did offer to help. (Immediately after the flooding, her husband had posted comments on Philipstown.info criticizing the village for not showing support.)

Falloon said the village should keep people away from flooded areas in the future. “We’ve taken for granted that everybody wants to see the power of a storm,” he said, “but they’re not understanding that they’re stepping over your stuff doing it and it’s unfair to you. In the future, no one’s allowed at the riverfront.”

Seibel asked why the fire department did not help to pump water out of basements after waters receded, because fire companies elsewhere did so. Falloon, a member of the village volunteer fire company, said the board would have to discuss policies on that with the fire company, adding that it would be advantageous for village entities such as the police and highway departments to coordinate services in emergency situations.

On sandbagging efforts, Jason Butikofer of Main Street, who as an eighth-grader had lost everything when the Mississippi River flooded his home in Iowa, remarked on the lack of effort to prepare for the flood in Cold Spring. “I come from a community that’s been flooded multiple times, and everybody’s pitching in,” he said. He then admitted, “Maybe it didn’t make a difference because I had 4 feet of water in my place,” but he said it was “disheartening” to hear former Mayor Seth Gallagher tell him there was nothing they could do. 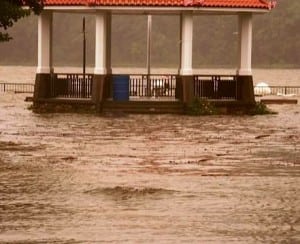 August 2011: The bandstand and the Hudson are one (Photo by J. Tao)

Alison Anthoine of New Street echoed the sentiment that sandbagging might not have helped in a storm like Sandy, but she added that when emergency personnel notified her of the voluntary evacuation, they could have advised her to move everything upstairs, and it would’ve helped had there also been volunteers, such as high school students, to assist her in moving things upstairs.

To save belongings from flood damage, Emily Moulton of West Street said next time she plans to have friends come help and move things into a pod for a day or two. “Maybe there’s something that could be done that’s a similar plan for everybody,” she suggested. Falloon agreed, “Maybe we set aside at the Highway Department a place for a bunch of pods.”

Planning Board member Bernard Molloy, who resides in the upper village, said there were a few days’ warning before Hurricane Sandy, when the village could have prepared better. He recommended doing a door-to-door census to collect contact information in potentially affected areas, since the village may not have up-to-date records of tenants in rental units, as well as removing or securing any village property that could be displaced by floodwaters, such as trashcans. Moulton likewise had advised securing boats, because during the recent flood a boat had become unmoored and was drifting dangerously toward her condo before the waters began to recede.

Many residents mentioned the need for one-way valves on storm drains in order to shut them once they fill with water from the rising river. Seibel made a distinction between the regular flooding that occurs two or three times a year and the devastating floods like those caused by Sandy. He admitted that one-way valves would not help in the latter, but he said they might help with minor flooding.

Karn Dunn praised the Hurricanes and High Water presentation that the Special Board on the Local Waterfront Revitalization Plan held with the New York Department of Environmental Conservation in January. “In the long-term, what can we as the village do? Some people say a seawall. Well, that just means the water goes around and doesn’t go out, by the way. What’s the difference between a seawall and breakwaters, which kind of mitigate a surge? Are there natural ways of doing it? They were all brought up in what was an excellent meeting, and we should all pursue these ideas further.”

Trustee Matt Francisco asked residents whether they had considered raising their houses — not just a few feet but creating a “sacrificial first floor” that acts as a parking garage or storage. He said the village and the Historic District Review Board (HDRB) would work with residents to waive certain building restrictions outlined for the historic district. “What good is a historic property that’s washed away?” he said.

Moulton thanked Francisco for bringing the issue up, because people had told her the village would not allow them to raise their condo since it wouldn’t be “historic.” She said raising the building would cost around $30-40,000, and they would have to finish the garage themselves. “FEMA really wants you to raise your houses, and they do give people money to do it,” she added, saying the task force could look into such funding.

At the end of the flood workshop, Hawkins collected volunteers’ contact information to join the task force that would meet soon to address the issues that were mentioned. Some noted that property owners and other stakeholders had not attended but should also be involved. Falloon said he would look into updating an emergency action plan for the village.

Two of the three applicants for two spots on the HDRB, Michael Bowman and Gretchen Dysktra, will join that board; Anthoine, the third applicant, will join the Zoning Board of Appeals.

Discussion of other items on the agenda — including the appointive boards’ responses to the proposed B4 zoning change for the Butterfield development; response to CHA on the Main Street improvement project; architect Stephen Tilly’s request to inspect The Grove (requested at the board’s last meeting with the HDRB); and a couple of bills from Village Attorney Stephen Gaba — were tabled in order to answer outstanding questions or to give more time for consideration.

One thought on “Village Board Creates Task Force to Address Flooding”