Beginning Wednesday, July 3, Dogwood will present a monthly “multimedia happening” of electronic music and video that might be the first event of its kind in the lower Hudson Valley, a region that is more widely recognized for its earthy folk and singer-songwriter scenes. 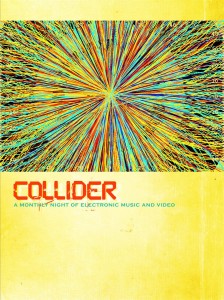 Experimental art music and electronic dance music (EDM) are the genre’s two most familiar forms. Less conventional than folk, blues or rock, electronic music’s appeal as an immersive sensory experience keeps it popular around the world with a broad spectrum of fans and subcultures.

As an avant-garde musician, composer, sound installation artist and curator, Garrison resident Neill has been working in this world for more than 30 years. He has recorded several CDs of his own music and is known as the inventor of the mutantrumpet, a hybrid electroacoustic instrument. “I come from a more downtown experimental background, but I’ve always worked with grooves and beats,” he said.

Beacon resident Dickens thinks the definition of electronic music is still pretty broad for most people. He credits Boards of Canada’s debut studio album, Music Has the Right to Children, as a turning point for him in his appreciation of what is known more specifically as “intelligent dance music” (IDM). “Based on all of the artists and galleries in Beacon, I think people here are used to looking at things differently. I’m hoping that they might also be open to listening differently.”

Beacon resident  Cason named DJ Spooky, the German band Oval and the NYC music collective Soundlab as influences, along with experimental filmmaker Stan Brakhage. “As a grad student, it was the visual aspect of live shows that got me started. All of those little glitches and beats of electronic music lend itself to the rhythm of a film and how it’s edited,” he said. Cason will project either live or premixed videos during interim DJ sets with Neill and Dickens.

Over the years, there have been similar one-off events in Beacon. Neill once hosted a DJ night at the former Piggy Bank restaurant, as did the art gallery Open Space. Cason recalled an ambient music event at the former Chthonic Clash Coffeehouse on Main Street, where people brought their sleeping bags and stayed all night. Citing Beacon’s growth over the last few years as a cultural center, Neill believes there may be more of a consistent audience now for something other than Top 40 hits or mainstream dance music.

To describe what Collider could be, Neill referred to preeminent music innovator Brian Eno’s “scenius” concept, wherein the notion of individual genius has given way more recently to the “intelligence of the whole,” the more collective way art is being made now.

“I really feel that electronic music is the art music of the 21st century. It is where the most interesting expression is going on,” said Neill. “We’re taking a laboratory approach with these events. We’re very open to whatever outside influences might come in, including local acts or even bands from outside the U.S. who might be touring.”

The opening night of the new monthly electronic music and video series will take place Wednesday, July 3, at 8 p.m., with a $3 cover charge. Dogwood is located at 47 E. Main St. in Beacon. For more information, visit facebook.com/colliderbeacon or call Dogwood at 845-202-7500.