Putnam County needs an upgraded mass transportation system, including a pilot program to link the eastern and western halves of the county, according to a new report from the county’s Transportation Task Force.

Submitted to county officials June 10, the 113-page document (replete with the text of a 2004 study as well as maps and surveys) also calls for revamped schedules and routes for the trolley that serves Cold Spring and parts of Philipstown seasonally Friday through Sunday.

The transportation report refers to the ’breathtaking views’ from Boscobel, perhaps like the scene of the Hudson River in twilight from the mansion lawn.

Among the report’s 26 recommendations, at least five directly affect Philipstown, and many of the others have potential for a strong local impact. Overall, the recommendations cover everything from calls for action by the U.S. Congress to changing the name of the transit system, currently dubbed PART for Putnam Area Rapid Transit, to details of specific bus routes. The county provides bus lines in its more densely populated eastern end but lacks anything comparable in the western sector where Philipstown lies.

In general, the recommendations reflect what Vincent Tamagna, a Nelsonville resident, told the Cold Spring Village Board and Philipstown Town Board in presentations in May. Former District 1 Legislator, Tamagna chairs the county task force, under supervision of the Planning, Development and Public Transportation Department.

The report, titled “Making the Connection,” states that to connect the county’s widely spaced areas along Route 301, “providing a regular daily shuttle to connect the east and west is important.” The task force urged creation of “a ‘pilot’ program for the Hudson River Turnpike Shuttle that connects the eastern and western sides of the county to necessary county services and allows the entire county to share in the experience of all that Putnam County has to offer.”

At present, the report points out, residents who cannot drive to Carmel must find other ways of getting there, but “a round-trip cab ride from Philipstown or Putnam Valley to the Department of Social Services or Putnam Hospital can cost over $100” — which county taxpayers pay when the individual is eligible for Medicaid. Alternatively, the county must send a social services employee to the individual’s home, the report says. “It would be more affordable and efficient to offer a limited service shuttle to accommodate residents in need of county services.”

Putnam could also gain revenue, the report predicts, since today many residents go to other jurisdictions to get driver’s licenses or passports, rather than make the long drive to a Putnam County office.

The report promotes “strong communication and resource coordination” between the county and regional bus lines, including the Leprechaun line that comes through Philipstown and offers “express service between Poughkeepsie and White Plains” with stops at major employment sites, the Westchester County Medical Center in Valhalla and the White Plains TransCenter.

It provides six round trips a day, with support from the New York State Department of Transportation for sustaining the route. Along the way, Leprechaun’s buses stop at Philipstown Square (formerly Perks Plaza) along Route 9 and in “Garrison at Route 9 and Route 9D. In addition, passengers may flag down the bus along its route,” the report states.

Yet the task force does not explain how residents lacking cars can get to the pickup points like the one at Philipstown Square, several miles from Cold Spring, or flag down a bus traveling 55 miles an hour down a busy state highway.

The report determined that the county should “build an efficient, seamless system inclusive of all bus companies,” such as Leprechaun, with “better hubs and pulse points.”

To enhance commuting, the report calls for more shuttle services for passengers of Metro-North trains. “’Rush hour’ commuter shuttles to Park & Ride locations and rail loops are necessary transportation improvements that should be carefully designed and studied in order to be efficient. Feasibility studies should include consideration for shuttle services for Putnam Valley to Peekskill, Putnam Lake/Patterson to Pawling, and Continental Village to Garrison Metro-North,” with the service extended to weekends, the report advocates.

It observes that the county has six Metro-North stations: Patterson, Brewster and Southeast (formerly Brewster North) on the Harlem Line and Cold Spring and Garrison, plus the limited-service Manitou station, all on the Hudson Line. “Brewster and Southeast are the two most heavily utilized stations, together accounting for more than 1 million boardings a year, or 70 percent of the boarding in Putnam County,” according to the report.

More interaction between transportation service providers, public and private, is also essential, the report suggests, adding that the benefits from doing so include financial rewards. “It is important to establish partnerships with all ‘regional’ bus services and Metro-North to optimize resources and manage assets to allow for a seamless countywide transportation system,” the task force wrote. “It is our priority to increase ridership in order to increase federal and state reimbursement, which will make the transportation service more affordable.”

In Philipstown, the trolley system uses two trolley vehicles, one backing the other up. It “runs an hourly schedule connecting Metro-North Railroad to Boscobel, Main Street and a variety of outdoor recreational trails. It is also utilized by the community at large, including shuttle service for students and seniors,” the report claims. 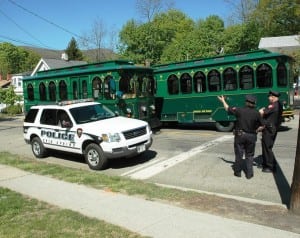 However, Cold Spring residents and hikers have long expressed concern that the trolley does not go to key trailheads at Breakneck Ridge, or to Bull Hill and Little Stony Point along Route 9D, a hazardous walk for pedestrians trying to access hiking paths. A coalition of government and nonprofit groups is spearheading establishment of a Hudson Fjord Trail, paralleling the river and Route 9D and tying Cold Spring to Beacon, to accommodate walkers.

As the county report circulated, fjord-trail backers met in late June to continue to review options. In a note disseminated June 24, one participant, Paul Elconin, vice president of the Friends of Fahnestock and Hudson Highlands State Park, referred to the trolley and a recent follow-up with Tamagna. Elconin said that changing the route would require a public hearing before the Putnam County Legislature and that Tamagna hoped to get one scheduled in the near future.

On a changed route, “stops are projected along Route 9D from Breakneck to Boscobel and through the Village (of Cold Spring) — Fair Street, train station, Main Street, etc.,” although no formal revised route has been published, Elconin wrote. “A show of public support for the trolley will be important before and during the public hearing. Letters to Vinny are important and should come in ASAP,” he added.

The transportation report indicates that the task force, and county, might be agreeable to trolley route changes. The report actually recommends the “immediate modification of the hours and the schedule for the trolley to accommodate the 2013 summer/fall tourist season,” although the report looks south from Cold Spring, toward Boscobel, not north, toward Breakneck.

“Early morning tourists enjoy the historic home, gardens and breathtaking views at Boscobel while the evening captures audiences of over 34,000 annually at venues such as the Hudson River Valley Shakespeare Festival,” the report says. “Tourists attend performances from June through September, and better transportation coordination and expanded hours are needed to accommodate visitors and coordinate with the Metro-North schedule.”

The report also foresees that “the trolley route could be converted to an economic development and tourism amenity rather than just a regular public transit service” — a suggestion that might cause puzzlement in Philipstown, where residents often assume the trolley already concentrates on aiding tourists, not addressing local mass transit needs.

In terms of logistics, the report proposes that the county “explore parking the trolley in Cold Spring to save money on operations, deadhead miles and gasoline costs,” instead of housing it in a county facility miles away. “An arrangement with the Village of Cold Spring is possible,” the report states, “although maintenance would have to be performed at the transit facility in Carmel.”

It likewise proposes that “this service be free from the constraints of the federal regulations” under the Federal Transit Administration, an agency of the Department of Transportation, that hamper mobility. “This would allow for additional shuttles to go to places like Fahnestock State Park,” the report states, asking county authorities to petition the U.S. Congress to drop “antiquated FTA regulations” to facilitate greater local flexibility.