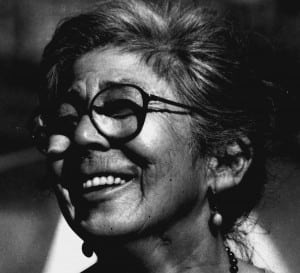 Toshi Seeger, activist, artist and wife of legendary folk singer, songwriter and peace activist Pete Seeger for the last seven decades, died at home July 9 at the age of 91.

The daughter of an American mother and Japanese father, Toshi was born in Germany and moved to New York as a child. She met Seeger in New York City. The young Seeger family eventually moved to the Hudson Valley.

Toshi was a “Mother” of movements in her own right, making films, organizing music festivals, including the Great Hudson River Revival, and raising the Seeger children. She played an active role in endeavors of the Hudson River Sloop Clearwater, which was launched in 1969.

Clearwater sails have been seen throughout Philipstown over the years as the vessel continues to carry on its organizational mission to preserve the Hudson River and the environment. Clearwater founding member Hal Cohen shared that, “All of us were enriched by her, and our lives are better because of her.”

Toshi Aline Ohta Seeger was born in Munich, Germany, to an American mother and a Japanese father. Loving wife to Pete Seeger, Toshi died peacefully at home July 9 at age 91.

Toshi’s mother gave birth July 1, 1922, while traveling in Germany. She entered this country at six months of age and took up residence with her mother, Virginia Harper Berry from Washington, D.C., and father, Takashi Ueda Ohta from Shikoku, Japan. She lived in Greenwich Village and Woodstock, N.Y., in the 1920s, ‘30s and ‘40s. Her parents and half sister, Aline Dixon, were part of the theatre community and she grew up surrounded by art and theatre.

Toshi attended The Little Red School House in New York City and graduated from the High School of Music and Art in 1940. She was a community volunteer, festival organizer, writer, filmmaker, road manager, potter, loving mother, grandmother, great grandmother and aunt. She met her husband, folk singer and activist, Pete Seeger in 1939. They married in 1943 in New York City, while Pete was on leave from the Army.

Toshi passed away eleven days shy of their 70th wedding anniversary. Toshi and Pete were partners in every sense of the word. They collaborated on everything from building their log cabin and organizing festivals big and small. This was made possible only through Toshi’s tireless work, creative mind and meticulous organizational skills.

Toshi served on the New York State Council of the Arts and marched in 1965 in Alabama, from Selma to Montgomery, with Dr. Martin Luther King, Jr.

Toshi collaborated with Pete’s manager Harold Leventhal on thousands of projects. She and her husband took their three children ages 17, 15 and 8 around the world, giving concerts and making field recordings and films in 28 countries.

In the 1960s she was instrumental in the early years of the Newport Folk Festival and helped discover bluesman Mississippi John Hurt.

Toshi was an untrained filmmaker. She co-produced, directed, shot and edited films about music from all regions of the country and the world. Many of her films are now at the Library of Congress.

In 1965, when her husband was no longer banned from all television, she produced a show called “Rainbow Quest” for Public Television. In 2007, at age 85, she executive produced the Emmy-award winning documentary, “Pete Seeger: The Power of Song.”

Toshi co-founded the Hudson River Sloop Clearwater organization and Clearwater’s Great Hudson River Revival. She initiated things that were rarely done at festivals in the 1970s and 1980s – such as recycling, wheelchair access and sign language interpreters.

Toshi will be remembered for her compassion, dedication to causes, as a matriarch within her family and local community, and for her cooking and elaborate organic garden.

While Toshi’s work with Pete was recognized internationally, she was also very involved locally – including Beacon Sloop Club’s annual festivals – and could be seen each year whipping cream at their annual strawberry festival. Toshi’s stone soup was the magnet that brought people to the Beacon waterfront, which ultimately transformed the city dump into Riverfront Park.

Toshi will be greatly missed by all who knew her. She is survived by her husband, Pete, son, Daniel (Martha) of Topanga, Calif., daughter Mika (Joseph Bossom) of Tiverton, R.I., and daughter Tinya of Beacon. Also, eight grandchildren, Sonya Cramer, Rufus Cohen, Tao Rodriguez-Seeger, Cassandra Seeger, Kitama Cahill-Jackson, Moraya Degeare, Penny Bossom-Seeger and Isabelle Bossom-Seeger; great-grandchildren, Dio and Gabel Cramer and Liam Oulton. She is also survived by many nieces and nephews on the Ohta, Dixon and Seeger sides of the families.

She was predeceased by her parents, Virginia Berry and Takashi Ohta, her brother Allen Homare Ohta, her sister Aline Dixon and a sister-in-law whom she raised as her own daughter, Penny Seeger.

A celebration of her life is being planned for a date in the future. Donations can be made to any of the organizations listed above. Arrangements pending at Libby’s Funeral Home in Beacon.

2 thoughts on “Toshi Seeger, Defined by Dedication, Dies at 91”