At first, the name may conjure up images of folks well beyond their prime, but in reality, a fresh new face has found its way to 61 Main St., in Cold Spring. Old Souls opened for business just in time for the Fourth of July. The shop, which boasts a beautifully refurbished rustic interior, offers a surprisingly large array of heritage home goods, outdoor gear and fly fishing equipment for the size of the store.

Owners James Caroll and his wife Tara operate the village’s newest business and were quick to dispel the rumor that Old Souls is only a fly fishing shop. James puts it this way, “We are more of a lifestyle shop – that also carries fly fishing gear.”

A quick glimpse of the store’s shelves confirms that variety is a major theme. Customers will find an eclectic mix of offerings; everything from cloth goods such as hand-loomed towels, wool and cotton blankets and linen aprons to maple syrup, honey and local raspberry jam. During its first weekend of business, the shop sold out of one of its lines of cast iron frying pans. Customers will also find quality wallets, bags, lawn chairs, belts – even gifts suitable for babies.  Not to mention hand-stitched journals, sketchbooks, note cards and made-in-Vermont cutting boards.

The Carolls, who have been married for three years, exude pride in the Made in USA labels found throughout their new store – as well as the high quality of their products. “For literally everything we want to sell, we look for it in the USA first,” James said. “If we can’t find it (here), we either drop the idea, or find it somewhere that we know it is made artisanal, and responsibly.” 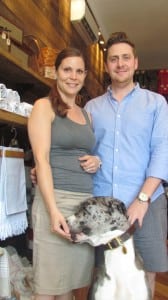 James and Tara Caroll and their Great Dane Percy

Turkish blankets and towels made on 100-year-old looms are an example of the latter approach. Although Patagonia products are not made in the U.S., you will find their merchandise in Old Souls. “They are the most environmentally responsible company in the world, and we proudly support them and their ‘1 percent for the planet’ initiative,” Caroll said. Patagonia donates 1 percent of its sales to preservation and restoration of the natural environment.

Caroll is just as definitive when it comes to quality. “Tara’s and my goal is to provide quality that lasts for life, and to help do away with the disposable culture we’ve all become so accustomed to,” he said. “Buy it once, that’s our motto. It may cost more, but you’ll have it forever.”

Gear – and off to Russia

It may not be just a fishing store, but fly-fishing is certainly part of the soul of Old Souls. Not surprising in that James Caroll is a passionate fly fisherman himself and serves as an expert guide. Next week he is off on a trip out of Kamchatka, Russia. Two weeks later he’ll find himself floating down a remote river in Western Alaska. In either case, he won’t be staying at the Hilton. “In Russia we sleep in small A-frames on the river. In Alaska, we are totally on our own in the Katmai Wilderness. We’re dropped off by float plane – maximum 75 pounds of gear per person.” Local fly fishermen will find a full range of gear at Old Souls including flies, rods, waders, nets, line, boots, camp chairs and more.

A lifetime of fishing

The 33-year-old Caroll has been fishing his whole life. “I can’t say I remember my first fish, probably because I was fishing before I remember anything,” he said.  “I grew up fishing with my father and uncles in the Adirondacks, and with my grandfather in the surf on Cape Cod.” He learned to fly-fish at the renowned Wulff School of Fly Fishing on New York’s Beaverkill River.

Other than charter or salmon fishing to fill their freezer, James is a catch-and-release fisherman. Actually, there’s one other exception: his mother-in-law. “Every once in a while she asks me to bring her a fish for supper.”

Is there anywhere left on the planet that he hasn’t fished but really wants to? “Wow, that’s a tough one,” Caroll said. “But the first thing coming to mind is fishing for golden dorado in the Bolivian jungle.”

Customers may wonder what prompted such a young couple to name their business Old Souls. “Tara and I have always felt that we were born in the wrong generation… that we’d be equally at home… in the 1900s. We are old souls, so that’s what we named our shop,” Caroll said. He first went into business with his father at age 19 and is still part of the family-run hardwood business, LV Wood, located on West 20th Street in New York City.

The Carolls have lived just outside Cold Spring since last October. They aren’t the type of people who will be sitting on the sidelines. “We already joined the Chamber of Commerce,” James said, “and we plan on being very active in our new community.”