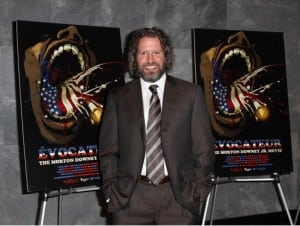 Évocateur: The Morton Downey Jr. Movie, will have a special screening at the Downing Film Center at 7:30 p.m. Saturday, July 27. This screening will be followed by a question and answer session with director Daniel A. Miller. The film will also have additional screenings at 2 and 7:30 p.m. Monday, July 29.

Before entire networks were built on populist personalities, before reality morphed into a TV genre, the masses fixated on a single, sociopathic star: controversial talk-show host Morton Downey Jr. In the late ‘80s, Downey tore apart the traditional talk format by turning debate of current issues into a gladiator pit. His blow-smoke-in-your-face style drew a rabid cult following, but also the title “Father of Trash Television.” Évocateur: The Morton Downey Jr. Movie dissects the mind and motivation of television’s most notorious agitator.

Ticket prices for Évocateur are as follows: Saturday, July 27 – general admission $10, members $8. For screenings on Monday, July 29, regular Downing Film Center ticket prices are in effect. Tickets can be purchased at the box office during box office hours or at downingfilmcenter.com. For more information call 845-561-3686 or 800-974-8592 or visit the website. The Downing Film Center is located at 19 Front St., Newburgh.