When I was 17, two friends – one brilliant and cynical, the other my boyfriend – drove me from Prescott, Ariz., where I had been living for four months, to Phoenix to catch a plane home. Along the way, we stopped for dinner at an upscale Mexican restaurant, reputed to be the best in the city. I don’t remember what I ate, only that Stuart, the cynical one, picked up the parsley garnish from the side of his plate, wiped his nose with it, and put it back. “They reuse these things, you know,” he said darkly.

I suppose to him this was an act of radical defiance, but I felt bad for the parsley.

My mom had been singing parsley’s praises for as long as I could remember. She didn’t know the half of it – did not know even the tenth of it, as it would turn out – and mostly just talked about iron, which was the nutritional superstar of that era, like phytochemicals are now; parents were always pushing iron back then. But even though I didn’t actually like parsley all that much, still she’d awakened in me a kind of protective fondness for the herb. 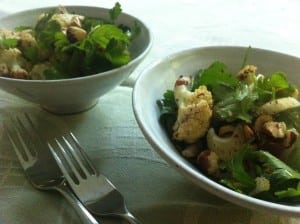 My affection has only grown in the decades since. Parsley is ultra-rich with vitamin C – more ounce for ounce than oranges – plus folic acid and riboflavin. It also contains particular antioxidants that have been demonstrated to fight cancer, reduce tumor size, and clean up oxidative damage. And it offers an impressive mix of minerals: magnesium, calcium, potassium, and zinc.

Equally germane, for me as a cook, is that parsley, which can taste quite bitter if you eat it plain, is easily and miraculously transformed into a delectable green when it’s combined with other strong-flavored ingredients.

It’s one of those nice magic tricks of cooking, that you can tame aggressive flavors by pairing them with other, equally-intense flavors. They kind of cancel one another out. I recently made a fine, lucky salad of chickpeas mixed with loads of parsley, chopped kalamata olives, minced garlic, red pepper flakes, lemon juice, and olive oil. (“Lucky” because I’d forgotten to make something for the camp’s vegetarians that meal, and had to whip this up at the very last minute; it came out better than anything else we served.)

In recent years, I’ve been happy to see parsley salads turning up in cookbooks and on restaurant menus. The first one I recall eating included capers, lemon, and a hint of anchovy, and was served alongside a great, honking hunk of bone marrow at St. John’s, in London, more than a decade ago. Sharp, fresh, and bracing, the parsley salad balanced the richness of the marrow beautifully.

Meanwhile, dishes like tabbouleh that once contained little bitty flecks of parsley are now overgrown with it. As Yotam Ottolenghi writes in his spectacular cookbook, Jerusalem, tabbouleh “is, essentially, a parsley salad, not a bulgur salad.”

Stuart would have a hard time wiping his nose on that.

It has been awhile since I’ve come across a sprig of parsley garnish lying limply to one side of a plate of restaurant food. Maybe that’s because I don’t go to the kind of restaurants that do that so much anymore, or maybe I’ve just stopped noticing the sprigs – tuned them out, like a persistent noise. But what I wish is that my obliviousness was proof that restaurants and diners have stopped squandering one of the world’s greatest foods in this desultory manner.

I suppose that is unlikely. After all, parsley does add an appealing visual note to an otherwise drab plate. But then so would hummingbird feathers.

This recipe is adapted from Jerusalem, by Yotam Ottolenghi and Sami Tammimi. The balance of flavors – bitter, salty, sweet, earthy – is so brilliant that no one of them stands out. Peter, who hates cauliflower, was blown away by it; he’s the one who encouraged me to share it with you here.

1 large celery stalk, cut on an angle into ¼-inch slices (about 2/3 cup total)