Kids get up close and personal with South American mammals

Noshing on the grassy fields behind the Desmond-Fish Library, a pair of llamas conjured up images of the Andes and offered up a novel way for local kids to spend a summer’s afternoon. “Dancer” and “Juliet,” female llamas from the Putnam Valley-located Hudson Valley Llamas, a rescue farm dedicated solely to llama rescues, entertained the children just by being themselves — gentle 250-plus-pound grazing animals who don’t mind being oohed and aahhed at, petted, and fed carrots. 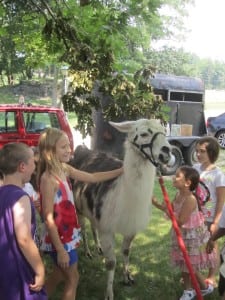 Friendly llama Juliet made a lot of kids happy on a summer’s day.

In a special children’s program provided to the library by Ann Beddingfield, the llamas were brought over to Garrison by Gail and Michael Bennett, who run Hudson Valley Llamas, a hobby farm, out of devotion to the animals. After a petting session, the children enjoyed a reading of author Anna Dewdney’s Llama Llama Misses Mama, read by Lucille Merry, the children’s librarian. She also mentioned that Alice Curtis Desmond, a founder of the library, “who knew Peru,” had authored a book, which Merry displayed, called The Lucky Llama, about a llama who strays away from his herd.

“Dancer,” a 13-year-old with all-brown fleece, and “Juliet,” around 10 or 11 and brown and white, are two of the nine llamas the Bennetts currently care for on their property, where they range freely and have the use of a barn when it’s particularly snowy or inclement. Most of their rescues come to them from other farms, sometimes those going under, economically, or simply when the farmers become too old. 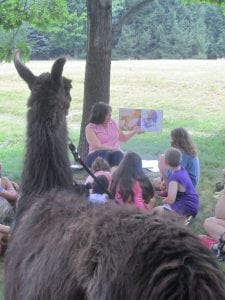 Desmond-Fish Children’s Librarian Lucille Merry’s reading of a llama-themed book was so engrossing that even the llama was listening!

They are “always happy to take a few more,” citing the “fairly low maintenance” of taking care of these creatures. “They need fresh hay, and eat grain pellets containing oats, and our veterinarians have taught us how to give them the monthly shots they need for parasites.” They also get inoculated for rabies. Fleece is shorn seasonally in springtime, usually every two years, and is donated to the Bennetts’ local grange for fiber work.

After storytime, the Bennetts gave a little factual talk about llamas, where it was learned that:

The Bennetts said that llamas were actually extremely affectionate, but on their own terms, much like cats.