A boisterous crowd, 838 strong, came out to Dockside Park Saturday night, Aug. 3, for a free screening of the Eighties blockbuster Back to the Future (Robert Zemeckis, 1985) and a “family shorts” pre-show, both put on by the Cold Spring Film Society. The popular feature was the latest in the lineup of the film society’s 3rd annual outdoor Summer Film Series, which has only two film nights remaining this summer. 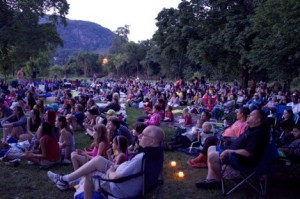 A record crowd attended the screening of “Back to the Future” at Dockside Park on Aug 3. Photo courtesy Cold Spring Film Society

It was preceded by a 30-minute pre-show screening for younger attendees of the delightful British children’s film The Gruffalo’s Child, which drew a crowd of more than 500. Some exited for bedtime at a brief intermission but many more brought pillows and blankets and stayed on to catch a glimpse of the time-traveling DeLorean with the stars over Storm King Mountain serving as a spectacular backdrop.

The large audience set an attendance record for the Summer Film series, beating the 700 who turned out in 2011 for the screening of The Princess Bride during the film society’s inaugural summer season. 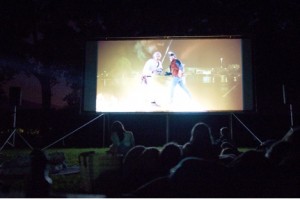 A large crowd turned out for the Aug. 3 film screening under the stars at Dockside Park.

Next in the 2013 Summer Film Series Lineup on Saturday Aug. 17, is The French Connection, the brilliant 1971 crime thriller by director William Friedkin (of The Exorcist fame) which will also feature the last children’s pre-show of the summer, the enchanting Oscar-winning short film The Red Balloon (Albert Lamorisse, 1956).

There will be a brief intermission after the 30-minute pre-show to allow for a bedtime exodus. Bring a blanket and a picnic. Visit coldspringfilm.org for more information or to make a tax-deductible donation to help support screenings. You can also donate by mailing a check to: Cold Spring Film Society, 192 Main St., Cold Spring, NY 10516.