New route would go to Mount Beacon, serve both residents and visitors 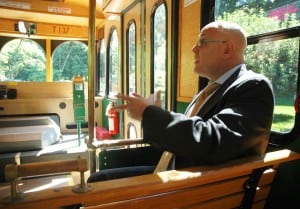 Riding the trolley, Vinny Tamagna discusses his plans for the revised route.

Accompanied by a few members of the ad hoc Hudson Highlands Fjord Trail movement, Vincent “Vinny” Tamagna, Putnam County transportation manager, on Friday (Aug. 2) scouted out an enhanced trolley route, which he hopes might begin Sept. 1, in the Labor Day weekend. First, though, Putnam County, which controls the trolleys, must conduct a public hearing on the route changes.

As Tamagna and his companions envisioned, the upgraded route would not only continue to encompass Cold Spring and Nelsonville and run south on Route 9D to Boscobel, but travel north to Little Stony Point, the Breakneck trail access, and another trailhead or two, and other stops, going as far as the parking lot below Mount Beacon, at the edge of Beacon, in Dutchess County. However, the revised route would not include the Garrison train station or other points below Boscobel. 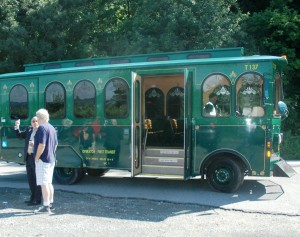 Vinny Tamagna, left, and John Teagle, caretaker at Little Stony Point, a member of the Fjord Trail movement, discuss Route 9D parking lot options as they wait for the trolley tour to start.

The new route would also feature sign-posted stops in Cold Spring, so pedestrians need not try to flag down the trolley as it drives by, and would begin and end at the Cold Spring Hudson River bandstand, instead of a block east on Main Street at the railroad tracks. Likewise, the trolley would spend Friday, Saturday, and perhaps Sunday nights at the Cold Spring village highway garage, instead of returning nightly to its main berth in Carmel.

Tamagna wants to boost trolley use, for a variety of reasons: spare pedestrians from having to walk along dangerous Route 9D to reach trails; assist tourists, including play-goers attending Hudson Valley Shakespeare Festival productions at Boscobel; make better use of the vehicle, and benefit residents more. Then there’s the financial incentive. “The more people we get onto the trolley, the greater the federal and state reimbursement per passenger,” he said. 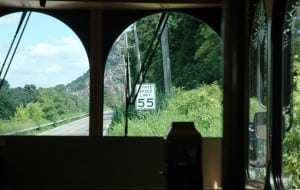 The speed limit on Route 9D increases to 55 miles per hour just at the spot pedestrians access a popular path, the so-called Cornish hiking trail.

Part of the reconnaissance mission involved gauging ways to improve the make-shift 9D parking sites between Cold Spring and Beacon, so that they might accommodate vehicles better, as well as give the trolley adequate space to pull over. Nonetheless, one likely stop seemed ready now. “This is ideal!” Tamagna enthused as the trolley entered the Mount Beacon parking lot.

Putnam County actually keeps two trolleys, one on the road and one as a back-up. Tamagna explained that because they have relatively few miles so far, 33,000 and 37,000 miles, respectively, they remain in near-pristine condition. 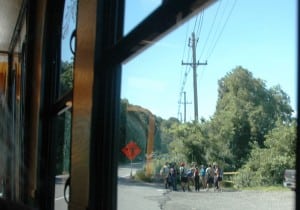 Viewed from the trolley, hikers prepare to set off from a Breakneck trail parking area.

They were purchased with the aid of federal grant money, so the county cannot assume complete ownership without paying the U.S. government for its share, he said. That amount would depend on an appraisal of what each vehicle is worth.

In an effort aligned with adoption of a better trolley route, a coalition of residents, government jurisdictions at several levels, and environmental organizations wants to create a pedestrian-bicycling path, the Hudson River Fjord Trail, between Cold Spring and Beacon.

One thought on “Trolley Goes on Scouting Mission for Hiking”