On the brink of a decision on a proposed residential wind turbine, the Philipstown Zoning Board of Appeals Monday pulled back to seek expert advice on how loud the modernistic windmill might be and its affect on neighbors. 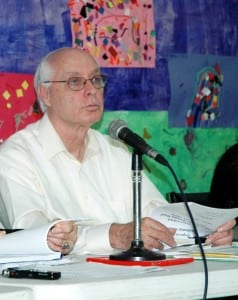 The evening also included pleas for more specificity in the zoning code on handling wind turbines and a call for a town-wide moratorium until the Town Board clarifies the law. Presiding over a public hearing at the Philipstown recreation center, ZBA Member Robert Dee announced his hopes of voting on the application by Garrison resident James Gleick for a special permit for the 152-foot wind-turbine.

Gleick needs the special permit because the town zoning code allows wind power but categorizes a structure taller than 40 feet as a major project, triggering the requirement for a special-use permit. The hearing was not the first in the 11-month saga of the turbine application, though earlier proceedings involved a zoning variance, before it became clear that a special-use permit better fit the circumstances.

The same issues that surfaced in the first go-rounds arose again, augmented by new material to bolster arguments. Most of those who addressed the ZBA opposed the permit, citing fears of noise, aesthetic blight, and a bad precedent.

“Wind turbines are an allowable use under the new zoning” code adopted in 2011, Dee observed in opening the hearing. However, after adoption of the code, “there were a lot of questions raised.” He said the Town Board intends to revisit the issue and update the zoning law as needed, a view echoed by Town Board Member John Van Tassel, liaison to the ZBA.

In contrast to massive commercial wind-farm turbines, arrayed across swathes of land, the Gleick windmill would be small scale, making power for family use. Proponents of wind energy tout it as a clean, green and safe source of power, unlike nuclear energy, coal, or oil.

Nonetheless, as the hearing revealed, backyard wind power, even on a 40-acre estate, can generate critics as well as energy.

Resident Paul Tschinkel praised the ZBA, and other town government panels, for “the fortitude” with which they “have taken care of the land. The greater good is very, very important” and Philipstown has shown it has a high regard for history, “for caring for each other” and for the environment, he said.

But in the wind turbine application, “I see one for one, the interests of one person,” not concern for the whole community, he said, characterizing the turbine as “kind of a bogus thing altogether. I’d ask Mr. Gleick to be a gentleman and withdraw his proposal. The character of the whole valley would be changing” if it goes through, Tschinkel contended.

Gleick, a science writer, did not attend the hearing but was again represented by Greta and Doug Passeri, of Hudson Valley Wind Energy LLC.

Saying his home is 1,500 feet away, Allen Smith objected strenuously to the turbine. “I know it’s going to violate the noise ordinance,” said Smith, describing himself as a Juilliard music graduate, former rock band sound technician, and music-business executive. “It may be nothing one day and loud as can be the next.” He gave the ZBA a sheaf of papers with data on noise pollution.

Another critic, Robert Cutler, told the board that “I’m not against wind turbines per se. But the subject of stewardship, it seems to me, is an important one. Why do we want to put windmills in this incredible historic area?” Cutler questioned what would happen in 35 years if the turbine stops running. “Then you have a large piece of litter in the forest, a large rusting hulk,” he predicted, urging enactment of a rule that the owner be responsible for removing a turbine if it ceases to operate.

Andy Chmar, executive director of the Hudson Highlands Land Trust, did not discuss the Gleick application directly but spoke of the need to protect the Hudson River Valley, “one of the most scenic landscapes in the United States of America.” He distributed a map depicting wind-power potential across Philipstown and promised the HHLT’s assistance to find areas where wind power “may be possible.” 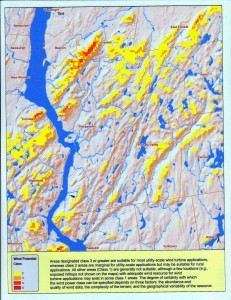 A U.S. Department of Energy map shows the level of wind-energy potential in Philipstown.

According to the map, from the U.S. Department of Energy, many sections of Philipstown are not good candidates for wind power. Chmar also explained that residents can now get wind power by enrolling in programs that channel wind-produced energy through regional utilities, relying on wind farms in parts of New York state conducive to them.

Doug Passeri, president of the wind energy company, discounted Smith’s claim about noise and said the turbine’s 50 decibels are like the sound of a home refrigerator kicking in. “Fifteen hundred feet away, you’ll not even hear this,” he said. Passeri also read a letter from the Philipstown Conservation Board, another town government committee, which stated “we have no objection” to the project.

Rodney Weber, another Philipstown resident, defended turbines, basing his opinion on personal experience. “I can guarantee you that from 1,500 feet you can’t hear them. Fifteen hundred feet from his neighbors is quite a distance” and “50 decibels of sound is nothing,” he said. Moreover, wind power “is a renewable source of energy. It actually looks good for our community” to allow it, Weber said.

“We’ve been batting this thing around for 11 months, an extremely long time,” ZBA Member William Flaherty remarked, calling it unfortunate that the zoning code doesn’t say enough to easily resolve the issue. “I’m requesting that the Town Board provide the ZBA a code specifically for this purpose,” he said.

Until then, he added, “I’m requesting that the Town Board declare a moratorium on all future wind turbine applications.” Flaherty also both debunked allegations about threats to animals from turbines and expressed concerns that, unless properly addressed by the zoning code, “we’re at the risk of these turbines popping up” everywhere.

Closing the public hearing, the ZBA went into a closed-door session, to confer with its attorney, Dominic Cordisco.

When the board emerged, Dee scrapped the idea of an immediate vote on the Gleick application. Instead, the ZBA voted to give Smith’s new materials to an acoustics expert from the town’s planning consultant firm, AKRF, and hold a special meeting Oct. 1 – to, presumably, vote on Gleick’s application at last.