The question most frequently asked of Tom Schmitz, the new owner of the establishment formerly known as Quinn’s Luncheonette, is what name he plans to give his business. What will he call it? “Quinn’s,” he says, with a straight face.

In fact, aside from minor renovations to the interior, a thorough cleaning and moving a few things around, Schmitz is not changing the place too much. He’s not even going to replace the old, weathered sign hanging outside of 330 Main St. – the one with the missing “n.” Even so, all eyes in Beacon are on the re-opening of the beloved diner that recently closed after 30 years of continuous service. 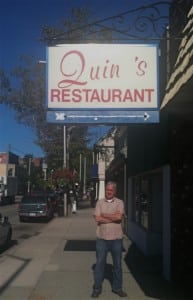 In a city where recent change is reflected in the many revitalized storefronts on Main Street, Schmitz might be feeling pressure a bit more than his fellow new business owners. Quinn’s is not an architectural landmark by any means, but it was a hometown institution. A collective sigh could be heard throughout Beacon on the weekend of Quinn’s closing last August, along with an outpouring of reminiscences and last-minute yearnings for Rose’s famous home fries and oven-baked bread.

Although there are restaurants here with breakfast on the menu, only a few authentic “greasy spoons” remain. Depending on one’s culinary preferences, the adage “change is good” may be debatable.

“We were lucky to have had it for so long,” said Beacon resident Claire Brown. “I remember going there in 2001 when we first moved here. We were the minority non-smokers who sat in the back section,” she recalled. “Cigarettes, coffee and syrup. I can smell it now. I miss it.”

Schmitz is not unfamiliar with change nor is he insensitive to it. He left Japan, where he was living with his family, in 2012 following the earthquake that year. After a brief stay in Philadelphia, he moved to Beacon last year to open Dogwood, a bar-restaurant he co-owns with Beacon resident and City Councilman, George Mansfield.

Before moving to Japan, Schmitz was a long-time resident of Williamsburg, Brooklyn, where he still owns the pub, Spike Hill. Earwax, a popular record store he opened there in 1989, is still in operation under new ownership. He bought Quinn’s this year with three additional investors after the building had been on and off the real estate market for years. 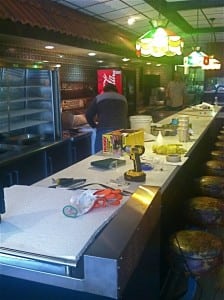 Repairs and cleanup behind the counter at Quinn’s.

“I actually looked at the building five or six years ago but for one reason or another it didn’t happen then,” explained Schmitz. “I opened Dogwood with George first, but was always thinking about what I could do with Quinn’s.”

Schmitz hesitates to confirm an official opening date or specific hours of operation because there are still renovations to complete and inspection approvals. The plan is that Quinn’s will be open in early October for dinner as many nights as possible, serving beer and wine only. He will soon add lunch to the menu, including authentic and healthy home-style Japanese food prepared by his wife, Yukie.

And what about breakfast?

“I’m ‘the guy who bought Quinn’s’,” said Schmitz. “When I tell people that I’m not really going to change much, they say ‘Oh, thank you!’ I like Quinn’s the way it is. You can’t recreate that history. I’d be crazy not to bring breakfast back to the place, that’s what people want. Right now, I just need to take one thing at a time.”