By coincidence this reporter started reading a T.C. Boyle novel (San Miguel) just when Ivy Meeropol and Rebekah Tighe announced that the author was scheduled to make an appearance at the now fabled Sunset Reading Series held at The Chapel Restoration on the riverbank in Cold Spring. 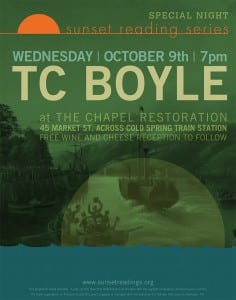 Naturally the first thought was of great minds thinking alike. The second more important thought was of the yeoman work Meeropol and Tighe have done to brighten the local cultural landscape by arranging, on a scant budget, to bring great novelists and poets to the beautifully restored airy space with the hard-back pews.

Placing Boyle on the agenda certainly bolsters the buzz of the series and offers readers an opportunity to encounter in person a writer whose work they already know or to become familiar with one who has an established reputation for achievement among contemporary American writers.

Boyle may not be as well known to the broader reading public as a recent previous visitor, E.L Doctorow, (who packed The Chapel), but his presence hereabouts is quite worthy of notice. The series’ service to the local literary community is as much about introducing writers who might be flying just below reader’s radar as it is bringing famous personages to The Chapel lectern. (A moment for a laugh recalling Doctorow gripping the lectern, smiling and intoning “Dearly beloved.”)

San Miguel (2012) is the most recent Boyle novel. His appearance in Cold Spring heralds the publication this year of a huge retrospective collection of his short stories, which have appeared over the years in all the top literary publications. Likely he will read from one of these stories at The Chapel.

Local readers, if they haven’t already, will want to consider a much earlier Boyle novel, World’s End (1987) because it explores and examines life in both the 17th and 20th centuries among an assortment of folks from our very own Hudson Highlands. The work, which won the Pen/Faulkner best novel prize and was selected by The New York Times Book Review as one of the best of the year, derives in part from Boyle’s own travails growing up in Peekskill. So Boyle’s visit is a homecoming, a chance perhaps to visit old haunts, or haunt old friends. He has taught literature at the University of Southern California for more than three decades

In World’s End, which this reporter is reading now, readers will encounter a rich detailed history of the area through the hard-bitten experiences of people contending with the land, the elements and the ghosts of the river valley first named North and only later for a Dutch explorer. Boyle’s diverse and closely drawn characters struggle with the search for love and meaning amidst the human capacity for cruelty and violence. Native Americans, Dutch settlers, English government officials, the famous and the ordinary, the originals and their descendants, are all whipped together into a quite serious picaresque froth of family, memory, intrigue, desire, ambition, disappointment, political commitment and betrayal.

For those unfamiliar the river bend just off Cold Spring is known as World’s End for its ship-sinking reputation among seafarers of pastimes due to its sharp currents, flinty wind gusts and deep water. Boyle’s often-offbeat characters are much in and around the river, which influences events natural and supernatural in their lives, as much as any factor. Boyle creates a world in which people three hundred years apart are connected by blood, land and the decisions the earlier generations made that still play out even today.

Reading San Miguel, this reader was struck by the thematic similarities of the two works written 26 years apart. San Miguel is an island in the Pacific Ocean off Santa Barbara in southern California. On this island, playing out on the far side (the world’s end?) of the European-American settlement story, characters in the last decade of the 19th and the third and fourth decade of the 20th century confront the fierce indifference of natural and economic forces to human aspiration, endure the dark side of the illusory siren call of isolation from other humans and the wrenching pangs of disappointment when one has given all for love only to lose it. 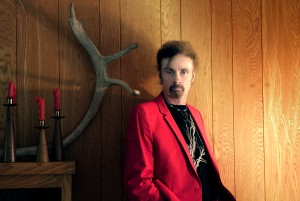 Great writers like Boyle make us feel emotions and think thoughts we might otherwise forgo. They upset the cobwebs of our certainties, remind us of our capacity for strength and our tendency toward frailty, and summon us to keep memory in the forefront of consciousness. They transport us to other times and places providing us with a generous taste of experiences we couldn’t have ourselves. And they introduce us to people we would never meet elsewhere, people who might broaden horizons or warn us of danger just ahead.

Sometimes encountering a writer in person can lead to a long-term engagement with their work, which of course is where you actually get to know them. If so inclined, get to The Chapel Restoration (45 Market St., Cold Spring) early for a seat for Boyle’s 7 p.m. appearance on Wednesday, Oct. 9.

One thought on “Novelist T.C. Boyle to Read at The Chapel on Oct. 9”