By a vote of 3-2, Philipstown’s Zoning Board of Appeals Tuesday night (Oct. 1) approved a special-use permit for a controversial residential wind turbine in Garrison, ending a year of public debate over that project but not over the larger question of utilizing alternative forms of energy in Philipstown. 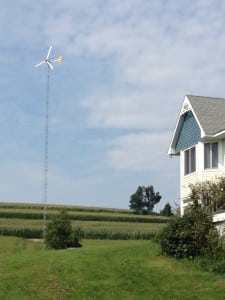 The board also voted 3-2 to approve the site plan for the wind turbine, but sought demonstration of  adequate owner liability insurance for the 152-foot turbine as well as a financial surety bond to cover costs should the town government ever need to go in and remove a defunct turbine or deal with a similar problem.

Since autumn 2012, James Gleick has wanted the turbine, a form of modern, backyard windmill, to provide energy for his rural home, on 40 acres. The application launched adamant opposition from some neighbors and critics, a series of public hearings, a change in application from a variance to a special-use permit, intervention by the Town Board to move the case along, and the decision by the Town Board in late September to pursue a moratorium on further wind turbines until it can review the 2011 zoning code and update it to address issues raised by alternative energy mechanisms.

In contrast to massive commercial wind-farm turbines, arrayed across swathes of land, the Gleick windmill would be small scale. Proponents of wind energy tout it as a clean, green and safe source of power, unlike nuclear energy, coal, or oil. Gleick needs the special permit because the zoning code currently allows wind power but categorizes a structure taller than 40 feet as a major project, triggering the requirement for a special-use permit.

ZBA Chairman Robert Dee announced at the beginning of the special meeting, in Town Hall, that the board would not take further public comments. “Some residents may agree and others disagree with the board’s decision tonight,” he said. “Every board member has the best interests of Philipstown and its residents in mind when they make the decision.”

On the brink of voting on the turbine Sept. 9, the board pulled back after it received more objections that Gleick’s turbine would be too noisy. The ZBA then scheduled a follow-up session for Tuesday and asked its planning consultants, AKRF, in the interim to provide expert advice on the noise question.

At the Tuesday meeting, Dee read aloud AKRF’s determination. “Based on our analysis,” the firm declared, “it is AKRF’s recommendation that the ZBA conclude that this project would not result in excessive off-premise noise and would fulfill the criteria” of the town code in regard to noise.

ZBA Member Paula Clair said that she had visited a couple of active turbines like the one Gleick intends to use. “I could not hear the turbines at all,” she said.

Clair joined Dee and ZBA Member William Flaherty in voting to grant the special permit. ZBA Members Vincent Cestone and Leonard Lim voted “no” on the permit. The same vote breakdown occurred on the site-plan approval.

However, as part of its site-plan action, the ZBA proposed that Gleick show a suitable level of insurance coverage and post a financial surety bond, whose amount would be set by the Town Board, not the ZBA. Dominic Cordisco, ZBA attorney, advised “that you recommend to the Town Board that they impose appropriate liability insurance, naming the town as an additional insured, as well as imposing appropriate surety for future removal of the tower if necessary,” before issuance of a town building permit on the turbine. The board concurred and the lawyer promised to provide the exact wording in writing of the provision before Dee signs the site-plan approval documents.

In general, Cordisco assured the board, “when you grant a special permit,” for a wind turbine or anything else, “the town does not become automatically liable for anything that happens on the site beyond your control. It does not mean the town is liable,” he said.

After the votes, Greta Passeri, of Hudson Valley Wind Energy LLC, the company working with Gleick and representing him at public meetings, expressed satisfaction at the outcome. “I’m pleased the ZBA followed the code, because it is an allowed use,” she said of wind power. “I wish it wouldn’t have taken a year. I’m hoping this is going to be a positive forward motion for Philipstown. It’s just disappointing” that local residents often seem to favor green-energy environmentalism “but when it actually is put in front of them, they balk. It’s frustrating.”